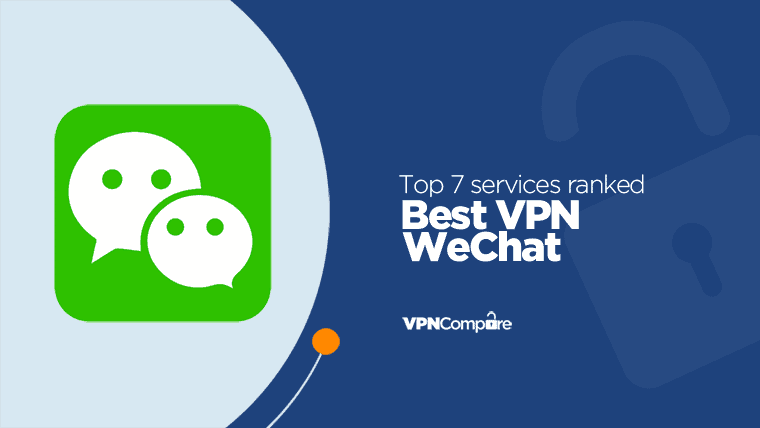 WeChat is the most popular messaging app in all of China, but its also popular across the globe with Chinese expats, family and more.

However, if you wish to use it outside of the country, you could find it blocked either on the network you're using or the country you're in.

The same is true for those who wish to use WeChat and at the same time, use a VPN. But which should you use?

Below we've rounded up our expert-picked selection of the top seven VPNs to use with WeChat.

ExpressVPN is one of the world's best VPN services, according to many of its users and our recent review confirmed this.

It is based in the British Virgin Islands, and as such, it doesn't keep any logs of its users' online actions and behaviour. This is great because what you do while connected remains private.

It is also rich with servers, featuring over 3,000 individual servers in 94 countries around the globe. Its security features are excellent, and they include all the most modern and most robust measures, such as the OpenVPN security protocol, 256-bit AES encryption, a kill switch protecting your internet traffic.

ExpressVPN supports torrenting, it is speedy which makes it great for online streaming, gaming, or downloading, and it has a 30-day money-back policy, just in case you change your mind about using it.

Overall it's the top choice for unblocking WeChat or using it securely.

Get the #1 VPN for WeChat

Next up, we have NordVPN, a Panama based VPN service that is fast, powerful, and extremely safe.

NordVPN is also very easy to use, with a user-friendly app that displays its servers on a map of the world. That way, you will always know where it is you have connected to, and which country's IP address you have.

It works well on all devices so whatever you use WeChat on, you'll be able to connect in just a few taps.

NordVPN offers servers in 59 countries, featuring around 5,300 servers in total. They are all fast, most are torrent-friendly, the VPN doesn't keep logs and they offer unlimited bandwidth.

It even has a 30-day money-back guarantee, in case you decide that you want a refund.

In the third spot, we have CyberGhost.

This is a reputable virtual private network located in Romania, which puts it far away from any nosy government, or even the 14 Eyes Alliance's jurisdiction. In other words, this is a secure VPN that doesn't keep logs, and it offers over 6,200 servers in 90+ countries.

It has a great many supported apps, and its speed and anonymity make it perfect for using WeChat anywhere in the world whether you're an Android or iOS user.

However, one thing that makes it stand out is its 45-day money-back guarantee. CyberGhost is willing to give you a month and a half to test all of its features and capabilities, which really shows that the service doesn't expect you to be disappointed and decide to go.

Up next is Surfshark, another VPN from the British Virgin Islands. This also means that it is another VPN from a privacy-friendly nation, which gives it the ability to not keep any data on what you do while connected.

Surfshark is a relatively young VPN, but it has risen through the ranks quickly due to its quality, and it now rubs shoulders with the best of them, as you can see on this very list.

In terms of servers, Surfshark has 1700 of them, located in 63 countries around the world. It will also protect you as you use WeChat with strong 256-bit encryption as standard.

It is also fast, cheap, and you can use it on an unlimited number of devices at once, which makes it one of the only VPNs to offer such a deal.

Moving on, we have IPVanish, another reputable service that has been around for a long time.

IPVanish offers some of the industries lowest prices, considering the quality of its service. It is user-friendly, it keeps zero traffic logs, and it lets you use all the censored apps and websites, including WeChat from outside of China.

It also features a 30-day money-back guarantee, and it has 1,500 servers in 75 different locations. It is fast, it uses the strongest encryption, multiple protocols, and it allows you to use an unlimited number of simultaneous connections.

Nearing the end of the list, we have VyprVPN, one of the few VPNs that use the brand-new security protocol, WireGuard, which is not only one of the most secure, but also faster than current offerings.

Other than that, it also features over 700 VPN servers, located in 70 different countries. In total, VyprVPN features more than 200,000 IP addresses for its users, and it offers end-to-end privacy, with no 3rd parties in between.

This all makes it extremely privacy-friendly, and a top rated and desirable VPN.

Fortunately, VyprVPN is also very fast and in our tests we found them to offer reliable connections almost all of the time. Like most other providers there's a 30-day money back guarantee too.

Last, but not least, we have VPN.ac.

This is a VPN with a smaller coverage than most others on this list, featuring servers in only around 20 countries. However, its servers are strategically placed with good coverage in Europe and the US.

If you're elsewhere then you'll need to do a little research to see if they're suitable in your region. They do, however, work well in China unlike many others so you can use WeChat both outside China and in the country.

VPN.ac keeps minimal logs for 24 hours, but they claim they're held securely in an undisclosed location. There's only a 7-day money back guarantee so you'll need to test it thoroughly with WeChat to see if it meets your needs.

How to use a VPN to unblock WeChat

Now that you know which VPNs are the best for unblocking WeChat, it is time to learn how to actually do it.

There are only a few steps, so you shouldn't worry about it, even if you aren't extremely tech-savvy.

Typically, you would have to do plenty of research to find out about different VPNs and select the best one. However, we have done it for you, so you can simply refer to the list above.

My recommendation is to use ExpressVPN, but any of the seven are suitable.

Next, you need to download an app for Android or iOS, install it, and log in. You can get the app from the appropriate app store, or the service's website.

They also have apps for desktops, laptops, TVs and more. So whatever device you use WeChat on you'll be covered.

Then, you will have to locate a list of servers, once you log into the app. Connect to the nearest country to you where WeChat isn't blocked.

If it's blocked on your local network then you can connect to your own country.

Lastly, you can now open WeChat and use it as normal without restrictions.

Is there a free VPN for WeChat?

You will likely be able to find a free VPN, although we strongly recommend against using those.

As you know, free VPNs are, well, free. As such, they are not getting their money from you, so they have to find alternative ways to make a profit to keep running.

Usually, this means either bombarding you with ads or logging your data and selling it to whoever offers more, which defeats the purpose of using a VPN in the first place.

There are also multiple reports of free VPN services installing malware which is a severe threat to your device and privacy.

Why do countries dislike WeChat?

As mentioned, WeChat is a highly popular app in China, but that's not all, it was created in the country.

With the recent tensions between Chinese government and the US, the United States are extremely concerned about Chinese companies and products being used within the States' territories.

US President Donald Trump argued that Chinese-owned apps pose a national security risk. Driven by such concerns, he decided to ban both WeChat, as well as another popular Chinese app, TikTok.

A number of other countries likely shares these concerns, at least to an extent, which is why many are doing the same and are banning WeChat from being available on their territories.

WeChat is a popular chat app and although it works in China, it is not available everywhere due to recent geopolitical tensions.

As a result, anyone who wishes to use it in countries/networks where it's not available or use it more securely will need to use a VPN.

In this guide we've listed seven top VPN apps allowing you to access WeChat as long as you have internet access.

ExpressVPN is our pick of the bunch due to their simple apps, fast speeds and strong security. However, which you end up choosing is up to you.

Get our Recommended WeChat VPN service!