Home » Entertainment » How to watch BT Sport outside the UK

How to watch BT Sport outside the UK 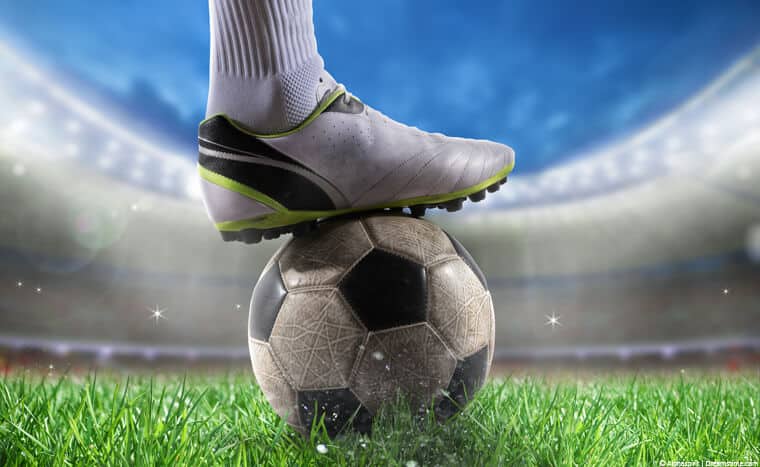 In this guide, we're going to show you the quickest and easiest way to watch the BT Sport streaming service outside the UK.

If you've been searching for how to watch BT Sport outside the UK, then your search is over.

We've created this guide to show you how you can view your BT Sport account anywhere in the world.

All you'll need is a simple app called a VPN that will let you unblock BT Sport to watch from anywhere. Keep reading below to find out how.

What you need to watch BT Sport

To watch BT Sport outside the UK, you'll need to sign up to a service called a VPN. A VPN will let you watch BT TV, all of its sporting events, and unblock it all from any country in the world.

A VPN (Virtual Private Network) is a privacy app for your mobile device or software for your desktop, Amazon Fire TV, or laptop computer that helps you hide your real location, and protects your data with security protocols, encryption, and a kill switch.

A decent VPN service will cost around £3 – £6 per month and the longer you sign up for, the cheaper it becomes.

There are loads of VPN service providers to choose from, but my favourite is ExpressVPN. However, if you want to shop around, you're free to choose any of these.

Check out ExpressVPN's yearly deal, which is 49% less expensive, for example.

If you want to look at even more VPN service providers, then we compare the top 20 in our VPN Comparison Guide.

How to watch BT Sport outside the UK

Just follow the simple instructions below to watch BT Sport outside the UK.

Four steps to watch BT Sport outside the UK:

Once the app or software has connected, all you need to do is visit the BT Sport website or launch the BT Sport app*.

*iPad/iPhone Users: It is not possible to use the BT Sport app on an iPad or iPhone using this method.

Instead of being blocked like you were before you'll be able to watch BT Sport outside the UK, and watch all the live and catch-up sports events.

If you think it'll be difficult or you get stuck take a look at the example images below that shows how easy it is to connect on both a mobile device and a laptop or desktop. 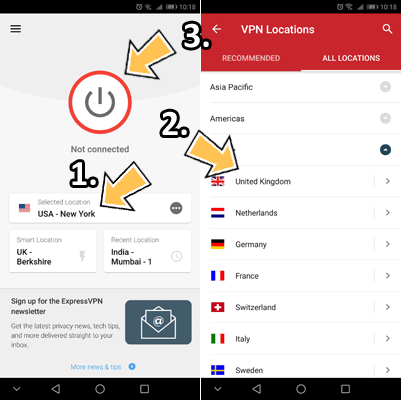 Where can you watch BT Sport?

With your new VPN service, you can watch BT Sport outside the UK from any country in the world.

This means you can watch every football match that BT Sport shows as well as any other sports on your own computer, phone, or TV.

You can watch both, live coverage and pre-recorded content.

One of the bonus features is that, with the same VPN services, you can not only watch BT Sport, but you can also view other subscriptions or free-to-air services too.

That means you can watch BBC iPlayer or Apple TV and other services and even other services you have subscriptions for such as Sky Sports, Eurosport Player, or other sports channels. All you need to do is subscribe to the right VPN and choose the appropriate VPN servers.

The original purpose of a VPN provider is to protect your online privacy so you'll also be protecting your privacy at the same time from government snooping or pesky hackers.

Why is BT Sport blocked?

BT Sport knows your location. When you try to watch BT Sport outside the UK, it blocks you from watching even if you have a valid subscription to a sports channel.

It does this by checking your IP Address. An IP Address is a little like a phone number, it is unique to you at the time of connection, and it also gives away your location.

This is the most reliable way to watch BT sport outside the UK.

What VPN service should you choose?

Choosing a VPN service can be incredibly difficult. There are now thousands of different providers.

Through our extensive testing, we found ExpressVPN to be the best to watch BT Sport overseas. They have some of the fastest speeds, and they're effortless to use.

While they don't have a free trial, they do have a massive 30-day money-back guarantee to give you peace of mind that if you can't get it working, you can get a refund. Plus they have a special offer – an additional 3 months for free when you take their annual service saving you up to 49% off the standard price.

When looking for a VPN service to watch BT Sport outside the UK, you need to choose a fast one. If it isn't fast enough, then you'll end up with buffering while watching which will ruin your enjoyment.

What to do is BT Sport isn't working with your VPN?

BT Sport doesn't like people using a VPN to watch its content from overseas and has attempted to block VPN users in much the same way that streaming services like Apple TV, BBC iPlayer, and Netflix do.

If it thinks the IP Address you are using is from a VPN, it will not let you access their service. All you will likely receive is an error message.

Fortunately, the best VPNs, including our recommended providers, have ways of getting around this approach and there is no reason why when you connect to your chosen VPN, you will not be able to watch BT Sport abroad no matter where you are.

But now and then, unblocking BT Sport may lead them to spot and block one or two of their IP Addresses. This can happen even to the best VPNs and usually, they will make short work of getting that server unblocked again.

We see it all the time on Netflix, BBC iPlayer, and other streaming sites too.

But that doesn't mean you won't occasionally have the bad luck of connecting to one that isn't working.

It's frustrating. But easily fixed.

The best way around this issue on streaming services is just to try another of your VPN's UK-based servers and then log into your BT Sport account again. This will solve the problem nine times out of ten.

If you still can't get things working and have tried several different servers, contact your VPNs customer support.

They will be more than happy to recommend a server that is currently working or explain if it is a more serious issue. This does happen but is extremely rare and not something you should worry about.

What is BT Sport?

BT Sport is the TV channel belonging to UK-based ISP and telecoms company BT. It is a sports-based set of channels with its most popular shows being live Premier League football.

It also offers live coverage of other sports including cricket, MotoGP, rugby, cycling, MMA, and various US professional sports such as the NBA and NFL. As well as this, there are also various sports-related discussions and news shows.

What football can you watch on BT Sport?

BT Sport allows viewers to watch live English Premier League and every UEFA Champions League game live. It also has exclusive coverage of the FA Cup and full coverage of all Europa League games too, so there will be no lack of streaming content.

Other football you can enjoy exclusively by watching BT Sport includes the German Bundesliga, Ligue 1 from France, the Scottish Premier, the National League, and much more.

Clearly, there is a lot of content that you and others may be interested in, which is why you, as a subscriber, need an easy way to watch BT Sport abroad.

Where is BT Sport broadcasted?

If you wish to watch BT Sport abroad, you should know that it is only available to cable TV and satellite TV users and internet users inside the United Kingdom.

This is because BT Sport only holds the rights to broadcast the live sports it shows in its home country.

Many of its news and documentary shows are made in-house and so BT owns the rights to these. A few are made available more widely on their website but most remain behind their geo-blocked wall.

But if you use a VPN, it is very easy to make it appear like you're in the UK even when you aren't.

This means as long as you have a BT Sport account, you can still watch BT Sport abroad and access all your favorite shows and the top live matches and events, no matter where you are.

What devices can you watch BT Sport on?

BT Sport is available on most cable TV and satellite TV networks in the UK. Channel numbers will vary so check with your TV provider.

You can also stream all of its channels directly by unblocking the BT Sport website. You will need to log into your account to do this and be using a modern, up-to-date browser.

There is also a range of dedicated apps. These can be downloaded from the Google Play Store and other usual app stores and are available for Smart TV, macOS, iOS, Android, and Windows devices.

Some VPNs to avoid

A VPN is a great way to enjoy your BT Sport app subscription when you are outside the UK on holiday or on business. But it is essential not just to choose any VPN to unblock it.

Free VPNs come with all sorts of risks and are unlikely to be able to unblock BT Sport abroad for any length of time. Our recommended VPNs are all premium VPNs that require a small monthly fee to use. But just because a VPN charges a fee doesn't mean it is worth the money.

There are some VPNs out there that have been proven to compromise user privacy and security and which are therefore not safe to use to unblock BT Sport and are best avoided.

We would advise you to steer well clear of:

So, you want to watch your favourite team or sport while you're traveling outside the UK?

Ordinarily, you would be blocked since you are outside of the UK. But, by using a VPN app you can alter your location, so it looks like you're still in the UK.

You'll be ready for watching BT Sport wherever you happen to be in the world. After all, the Premier League, Serie A and more are coming up, so you better be ready when they arrive.

Grab ExpressVPN, download their VPN app from the site, Google Play Store, Apple App Store, and other stores, connect to the UK and enjoy all the sporting action whether you're holed up in a hotel, hiking a mountain or kicking back on the beach.

If you don't like it or you find that you cannot unblock BT Sport – you can always get a refund through the money-back guarantee.