How to watch UK TV in Gibraltar | Stream British TV 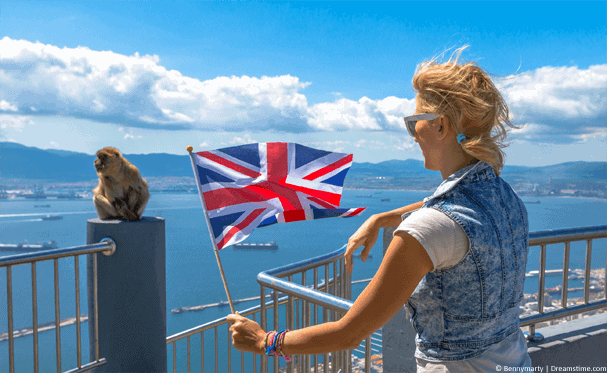 In this guide you'll learn how you can watch UK TV in Gibraltar on any device. There's no complicated set-up and it's all in beginner-friendly English.

Gibraltar, a little piece of paradise for thousands of Brits who call this Mediterranean land home.

This is all down to ‘geo-restrictions'. The internet like the real world has erected borders around content and streaming services from the UK are no exception.

However, just like a passport, there's an app known as a ‘VPN‘ that lets you hop over these borders and watch content from other countries, in this case, the UK.

Below I'll be showing you how easy this is and how you can be watching all your favourite UK TV in Gibraltar within minutes (yes, minutes – this is beginner-friendly remember).

Where to get a VPN to watch UK TV in Gibraltar

To watch UK TV in Gibraltar, you first need to get yourself a VPN app. They cost a few US dollars per month and work with almost all types of devices from computers to tablets and phones to TVs. So you can pretty much watch British TV on any device.

There are hundreds of different VPN services out there and while they all mostly do the same job, some are better than others.

I've been using and recommend ExpressVPN. They're one of the highest rated VPN services and most reliable for British TV.

Exclusive: Save 49% off the annual package

How to watch UK TV in Gibraltar

Follow the instructions below which show you how to watch British TV in Gibraltar.

The above image is an example of the computer app. The app may look a little different depending on what device you're using but they all work in the same manner.

Now you're connected you can access any UK TV websites or apps from Gibraltar without being blocked by geo-restrictions.

What TV Channels can I watch?

Once the VPN from ExpressVPN or one of the other providers is connected you can watch almost all UK TV services.

Some free-to-air ones worth watching are BBC iPlayer, ITV Hub, All 4, Channel 5, TV Player and Dave.

Subscription services you can watch include the likes of Sky Go, BT Sport, Sky Sports, UK Netflix, BFI Player and others.

Are there any TV Channels that don't work?

Most UK TV services using the method above will work.

Unfortunately, two services that don't work using this method or any other method are Virgin TV Go and Amazon Prime UK.

ExpressVPN and the other listed VPN services from above all offer apps for the most popular devices.

This means you can watch UK TV in Gibraltar on any of these devices. You can also install their service on more than one device so you're not just limited to watching on one type of device.

Can I watch UK TV on my actual TV?

There's nothing better than watching UK TV on an actual TV. While it's all well and good watching on a laptop or tablet when you're only in Gibraltar temporarily, if you live there permanently, then you'll likely want to watch on your TV.

The solution to this is to buy an Amazon Fire TV Stick and sign up for ExpressVPN.

You'll need to have the Amazon Fire TV Stick sent to an address in the UK and then get it shipped over to you in Gibraltar. It's a small device that plugs into the back of your TV and lets you access internet TV services.

You can then install the ExpressVPN app onto the Amazon Fire TV Stick which will unblock British TV in Gibraltar allowing you to watch on an actual TV.

All of the TV apps work except BBC iPlayer which you can watch through the built-in ‘Internet' web browser (previously known as ‘Silk Browser') or by downloading an additional browser like FireFox to your Fire TV Stick.

Is using a VPN app legal?

VPN apps are completely legal privacy tools used by millions of users around the world every day.

They were initially used by business to allow remote workers to access their internal networks securely but these days they're used by users to protect their online internet privacy and by many accessing overseas TV services.

So there's no need to worry, VPN apps are completely legal in Gibraltar, the UK and 99% of other countries in the world.

To watch UK TV in Gibraltar, you'll need to sign up for and download a VPN app. I recommend ExpressVPN as they're the best for the job.

Once you've got their app, connect to the United Kingdom.

You're now free to watch any UK TV channels you want right at home or on the move in Gibraltar.