Home » Guides » How to watch the European Indoor Championships

How to watch the European Indoor Championships 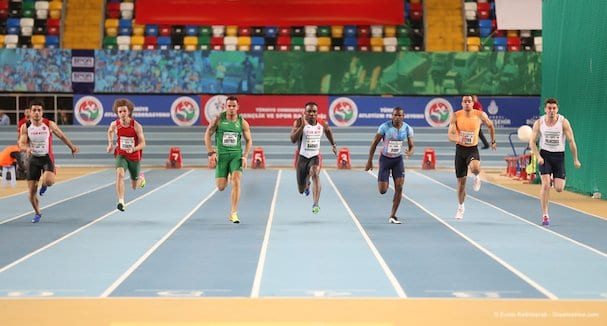 The European Indoor Athletics Championship is being held this weekend in Glasgow. It promises to be a fantastic spectacle in its own right as well as a great litmus test for the World Championships this September and next year’s Olympic Games in Tokyo.

The three-day event is set to be broadcast on various platforms in the UK, but if you are outside the UK and want to enjoy the action, you may struggle. There may be some coverage in other European countries, but elsewhere there is likely to be little.

But don’t worry; with a VPN app you can unblock and enjoy British coverage of the entire three days of competition no matter where you are and, in this article, we are going to tell you how.

What channel is the European Indoor Championships shown?

The BBC holds exclusive rights to live and on-demand coverage of the European Indoor Athletics Championship in the UK.

They will be broadcasting much of the action on BBC Two with additional coverage also available on their Smart TV service, the BBC Sport website, and the BBC Sport app.

Everything they have to offer will also be available to stream both live and on-demand via the BBC iPlayer.

For those wanting to watch outside the UK, the iPlayer is likely to be where you turn although, as you will see, it will be blocked. However, with a VPN, you will be able to watch on the website and app too.

If you want to watch the BBC’s coverage of the European Indoor Athletics Championship outside the UK, you will need a VPN to do so. But the process of setting things up is straightforward.

The hardest part is choosing the right VPN to use. We can help you there having tested all the best VPN with the BBC’s online services. Our top three recommended VPNs to use are:

ExpressVPN would be our top recommendation thanks to their lightning fast speeds, strong privacy protections, and large server network.

Once you have chosen your VPN, getting everything set up is easy. Here is a simple four-step process for you to follow using ExpressVPN as an example:

Following the steps above will connect you to a British-based server and so unblock the BBC iPlayer as well as letting you watch on the BBC Sport website or app.

When are the European Indoor Championships taking place?

The European Indoor Athletics Championship will be held between Friday 1st and Sunday 3rd March.

There will be three full days of competition and, to their credit, the BBC is offering fairly comprehensive live coverage. Their BBC Two schedule will be as follows (all times GMT):

Outside of these broadcast hours, coverage will continue on the red button on your Smart TV and also on their website, app, and the iPlayer.

As with all live athletics events, there will sometimes be several events taking place simultaneously. When this is the case, alternative events will also be available to watch on their online services.

Where is the European Indoor Championships taking place?

This year’s European Indoor Championships are being held at the Emirates Arena in Glasgow, United Kingdom.

This purpose-built sports arena was only opened in 2012 but has already become the home of world-class sports events in Scotland. It features a 5,500 seat main area where the bulk of the action will take place as well as the adjacent Sir Chris Hoy Velodrome.

What events are taking place?

The European Indoor Championship will feature a broad range of track and field events for both male and female competitors.

If you are an athletics fan, you won’t want to miss the upcoming European Indoor Athletics Championships in Glasgow. Fortunately, if you use a VPN, you won’t have to even if you are going to be outside the UK this weekend.

As we have explained in this article, by connecting to a VPN, you can enjoy all of the BBC’s coverage of this three-day event no matter where in the world you are. ExpressVPN is our recommended provider for the job and in this article, we have provided a simple guide on how to set everything up.

All you need to do is sign up today then sit back and enjoy all the action from what promises to be a thrilling weekend of athletics competition.