Home » Guides » Articles » How to watch Derry Girls outside the UK

How to watch Derry Girls outside the UK 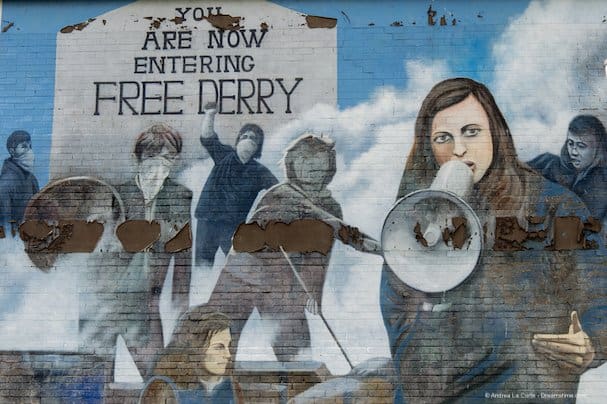 The second series is due to hit screens in the UK soon, but unfortunately, if you are outside the UK, you still have a while to wait before you can watch.

Unless, you use a VPN that is, With a VPN, it is possible to unblock Derry Girls and enjoy the new series live and on-demand no matter where in the world you are. In this article, we will explain how to do that and also recommend the best VPN for the job.

What you need to watch Derry Girls

To watch Derry Girls outside the UK, all you need is an internet-connected device and a VPN connection.

There are an awful lot of VPNs on the market and some are much better than others. If you want to enjoy Derry Girls overseas without issues like buffering, you will want to choose the best.

That’s where we can help. We have tested all the best VPNs on the market and found that the best VPN for the job is ExpressVPN.

ExpressVPN has a colossal server network, offers some of the fastest connection speeds around, has fantastic apps that work on almost every device, and provides robust encryption and privacy protection. It is the perfect combination which is why they came out on top in our tests.

If you don’t fancy ExpressVPN, there are other providers that are up to the job too. Both IPVanish and NordVPN performed pretty well in our tests too. They did the basics fine and offered different features which may appeal to some users.

But, if you want to choose the best VPN for the job, it has to be ExpressVPN.

How to watch Derry Girls outside the UK

Once you’ve chosen your VPN, the next step is to get things set up. If that sounds ominously complicated, don’t worry. It’s extremely straightforward, takes no more than a few minutes, and you can do it even if you’re the most novice of users.

To put your mind at ease, we have compiled this simple step-by-step for you to follow. We have used our top recommended provider, ExpressVPN, as an example, but you can follow these steps with any VPN.

What devices can I watch Derry Girls on?

Derry Girls is broadcast by Channel 4, so if you are going to stream it, either live or on-demand outside the UK you will need to use their All 4 streaming service.

This can be done through their website regardless of what type of device you are using. But there are also a number of dedicated All 4 apps which can make things easier.

These are available for all iOS and Android mobile devices as well as on Amazon devices such as the Firestick and Fire TV. Conveniently, ExpressVPN also offers dedicated apps for all of these devices.

All 4 can also be used with Chromecast, and on most set-top boxes, Smart TVs, and games consoles, most of which are also catered for by ExpressVPN too.

When is Derry Girls shown on TV?

The new series of Derry Girls begins on Tuesday 5th March. It will be broadcast on Channel 4 at 9.15 pm GMT and lasts for 30 minutes per episode. Subsequent episodes are likely to be on Tuesday’s at the same time.

New episodes will be streamed live on the All 4 website at the same time as they are broadcast on the television. They will also be made available for viewing on-demand shortly after the live broadcast has finished.

You can also find all the episodes of the first series of Derry Girls on All 4. It is also available on certain other platforms too, including Netflix.

Derry Girls is a sitcom set in Northern Ireland during the 1990s at the height of the troubles.

It follows the lives of a group of Northern Irish schoolgirls, and their English cousin who has become the only boy at their all-girls school over fears he would be bullied for being too English at the boys’ school.

If you want to enjoy the new series of Derry Girls from outside the UK, you can with a VPN. ExpressVPN is the best one for the job and in this article, we have provided a step-by-step guide on how to get everything set up and ready.

We have also furnished you with plenty of background information on the new series, so there are no excuses to miss the hotly anticipated second series of this cracking new sitcom.