Home » Entertainment » How to Watch British TV in Switzerland

How to Watch British TV in Switzerland 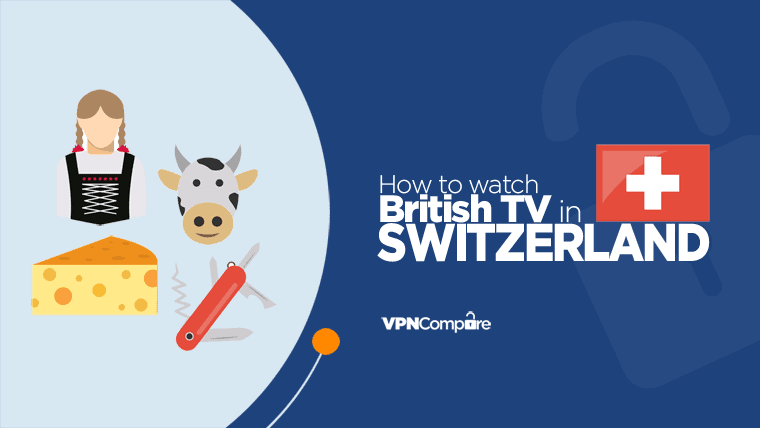 Switzerland is great right? Chocolates, the army knife, the Matterhorn and all those other wonderful Swiss clichés.

But whether you're living or travelling there, one thing Switzerland doesn't have in abundance is British TV.

If you're a fan, then you'll be left a little disappointed.

Whether you are a UK citizen who frequently travels to Switzerland or you managed to move there permanently, you may soon find yourself missing TV from home.

Usually, when this happens, you cannot really do anything about it. After all, the UK is quite well-known for keeping its content for itself and blocking outsiders from viewing it.

Unfortunately, while you are outside of the UK, you are considered an outsider too, simply because of your new location.

Thankfully it doesn't need to be like this and there's a simple solution that will allow you to binge-watch UK TV until your heart is content.

Keep scrolling to find out how.

Where to watch British TV?

If you want to deal with this issue in an old-school kind of way, you can always try to get a cable subscription in Switzerland with British TV.

However, doing so is not exactly easy, and apart from being bothersome, you also have a massively reduced selection.

A far better approach is to watch it via online streaming services, the type you might use in the UK when you've missed a show or need to watch live using an internet connection.

Sadly though, most services will not work in Switzerland, so you'll need an additional tool which comes in the form of an app called a VPN – below I'll explain more.

Simply put, you will need to get a VPN app.

VPN, or Virtual Private Network, is an app provided by a VPN service that allows you to achieve online semi-anonymity, privacy, and security.

While privacy and security are its main features, and indeed – the reason why they were invented, the increased amount of geo-restrictions over the last decade gave VPNs a new purpose.

In a nutshell, you can use a VPN app to alter your location.

The smart ones amongst you will have already realised that you can use that to give the impression you're in the UK, even though you're actually skiing down a mountain, eating Swiss cheese, yodelling or whatever else Swiss people do in their spare time.

The result is you can view UK TV in Switzerland.

There are plenty of VPN services out there each with their own apps.

After some extensive testing, we found ExpressVPN to be about the best. Not only are they straightforward to use, but there's also a 30-day money back guarantee.

There are other options though so if you want to check out some choices, then these are my top 3:

How to unblock UK TV: Step-by-step

The next thing that you will need to know is how to get a VPN and how to use it.

Now head over to your favourite online streaming service* and enjoy all the British TV you can cram in.

What can you watch?

With VPN services recommended above, you can access nearly any service in the United Kingdom.

That includes subscription-based, as well as free-to-air services. You can also use services like Netflix, which are available worldwide.

However, by connecting to the UK first, you can access any content on Netflix that is available in the UK.

As you may know, Netflix changes its content depending on the country you're in at any given time.

So while you are connected to the UK server, it will believe that you are in the UK, and present you with all the content available back home which will be different to the Swiss Netflix catalogue.

How to watch on a TV?

While using a VPN on your phone, tablet, or a computer is pretty straightforward, watching on TV is slightly different.

If you're like a lot of other people and me you prefer to watch your TV on an actual TV – and who can blame you?

One of the best ways to do this is to use an Amazon Fire TV / Fire TV Stick from the UK. You can install the VPN app from ExpressVPN directly onto it and then it plugs into the back of your TV.

You'll need a Fire TV Stick from Amazon (get one here) and an ExpressVPN subscription.

Alternatively, if your TV already has apps built in you can buy a VPN router like the Invizbox 2 which allows any device connected to it to appear like it's in the UK.

Travelling to Switzerland, or moving there from the UK can be difficult.

While the scenery is breathtaking, the pace of life more relaxing and a whole host of other benefits, there's no denying that a lack of British TV is a bit of a negative.

The easiest way to rectify this is by using a VPN and connecting to a UK-based server, which will grant you access to almost all of the UK content.

Sign up for ExpressVPN, grab their app, connect to the UK and that's it.

It will be as if you've never left the UK, which is a great way to enjoy some familiar home content while travelling or living abroad.

*A VPN service not intended to be used as a means of copyright circumvention. Please read the Terms of Service of the VPN service and the TV streaming service for more details.