How to watch Barcelona’s Barca TV in the UK

In this guide we'll show you how you can watch Barcelona TV in the UK which is otherwise known as Barca TV or in Spanish Barça TV.

Barcelona is one of the biggest football clubs in the world and because of this, there's a massive interested in watching not only the team's matches but also videos and news about Barcelona as a whole.

Barcelona FC has its own online streaming service simply known as Barca TV. It shows some select matches and other interesting Barcelona related shows.

Unfortunately though, Barca TV is restricted to watching from within Spain only but with an app called a VPN you can unblock Barca TV and watch in the UK. Or in fact, watch anywhere else in the world.

If you're in Spain you can simply head over to the Barca TV website which is part of Barcelona FC's main website. You're free to stream any of the content and watch live events shown there.

If you're outside Spain and you try to watch certain events you can be blocked from viewing. This is often the case if you're trying to watch live football such as Barca Women.

With an app called a VPN, you can make it look as if you are in Spain and so instead of being blocked you'll be able to watch all the action.

Follow the instructions below that show you where to get a VPN and how to use it to watch Barca TV in the UK or anywhere else in the world.

How to watch Barcelona's Barca TV in the UK: 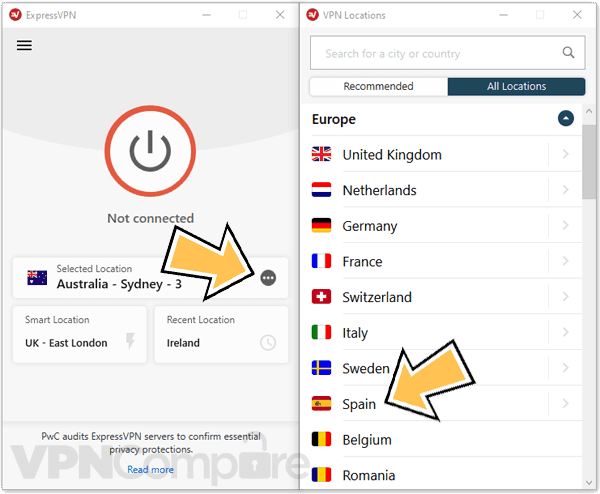 You're now able to watch any of the live or recorded shows on the Barca TV website.

When you've finished watching all you need to do is press Disconnect on the ExpressVPN app.

As long as you've got an active subscription to the ExpressVPN service you can reconnect as many times as you want whenever you want and use it to watch more content. There are no additional charges.

How does a VPN work for Barca TV?

A VPN works by passing your data to another location.

When you connect to Spain on the ExpressVPN app everything you do is first sent to Spain. For example, when you type in the Barca TV website it doesn't directly go and get this website.

Due to the ExpressVPN Spain ‘server' requesting the Barca TV website it thinks someone in Spain is requesting it and so instead of blocking you or not showing you the content it lets you watch.

VPN apps are completely legal tools to protect your online privacy and a feature of that is allowing you to disguise your online location to appear elsewhere.

Are there other VPN providers?

Yes, there are thousands of companies who offer VPN services, ExpressVPN is not the only one.

We recommend ExpressVPN because they're one of the fastest providers and they offer a Spanish ‘VPN server' which is essential for watching Barca TV.

However, we understand if you've got time on your hands you may want to shop about to check out the competition. It's worth remembering that not all VPN services are suitable for watching Barca TV because they don't support Spain.

Three providers that do if you want to check out alternatives are:

They all work exactly the same as ExpressVPN. The only difference is their apps will look a little different in their layout.

The process is exactly the same though. Simple install their app, login and then select Spain and Connect.

You can watch Barca TV in the UK or any other country. All you need is an app called a VPN which does the hard work for you.

You can get a VPN such as ExpressVPN by clicking the button below.

Once you've got the app, install it, connect to Spain and then head over to the Barca TV website where you can stream any content you want.

If you need more in-depth details you can read the more precise steps earlier in this guide.