It works just like a proper VPN but, as our review has found, it’s standards are some way short of those set by most significant VPN services these days.

VPNhub offers a free and a subscription service. As is always the case, the free VPN option comes with some significant restrictions.

In VPNhub’s case, there is no limit on bandwidth, which is unusual. However, users of the free service only have access to one US-based server, not the whole VPNhub network. The service is also only available on iOS and Android devices at the moment too, so if you want to use it on desktop devices, you are out of luck.

In our tests, we were using the VPNhub Premium service and this does come at a price, regardless of whether you are signing up for a month or a year: 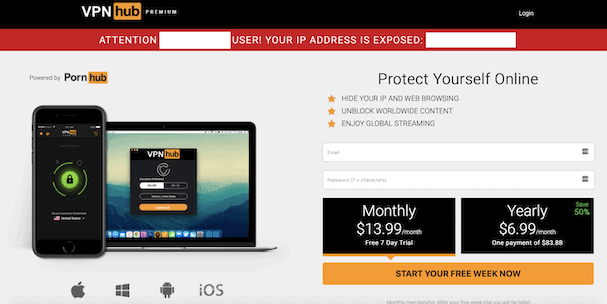 There is no avoiding the fact that these prices are much higher than the market average and as you will see in the rest of this review, there isn’t much justification for this.

The service costs more than IPVanish, whose network it piggybacks on, which does beg the question why you wouldn’t just sign up with IPVanish in the first place.

It appears that subscription prices vary depending on where in the world you look to sign up from too. Regional pricing is a very odd policy and one more likely to alienate customers than attract them.

There is a 7-day free trial available for anyone keen to try before they buy and we would certainly suggest you take advantage of this. However, there is no money-back policy that we could determine.

VPNhub offers OpenVPN as standard to all users. OpenVPN is the most robust VPN protocol around and therefore the right choice to make if you have to restrict users to just one.

It is tough to ascertain whether VPNhub logs user data or not, which is never a satisfactory situation.

They indeed claim to be a no logs VPN, but their privacy policy is about as vague as they come.

The privacy policy reveals that some user personal information is retained and makes it clear that VPNhub does not accept responsibility for any of your data that does leak. This caveat also doesn’t fill you with confidence.

Their relationship with IPVanish could also worry some people as IPVanish were found to have released user logs to US law enforcement agencies last year.

Put all this together and there is enough doubt about VPNhub’s logging policies to give cause for concern.

VPNhub has a total of 826 servers available to choose. This is a decent number of servers although other VPNs offer more. These are all borrowed from the IPVanish server network, although IPVanish itself provides a lot more too.

The VPNhub servers are only spread across 18 countries. These countries are Australia, Belgium, Brazil, Canada, Denmark, France, Germany, Hungary, Italy, Japan, Korea, Netherlands, Poland, Singapore, Spain, Sweden, the UK, and the US. 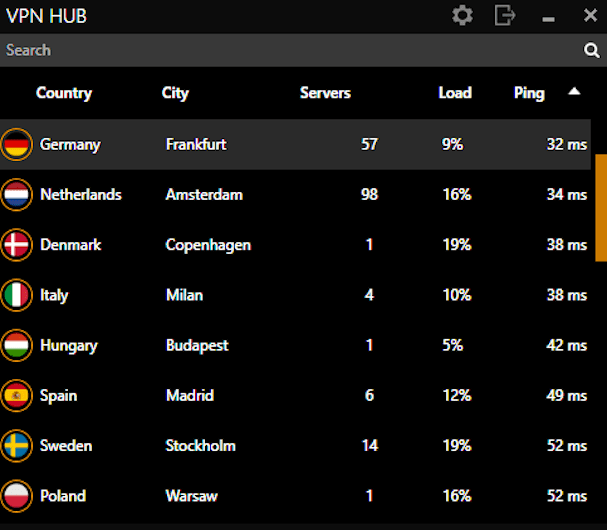 Some of VPNHub's server selection.

While Europe and North America are pretty well catered for, servers elsewhere in the world are in short supply.

Users should, however, note that these servers are only available to premium subscribers. If you opt for VPNhub’s free service, you will just have access to a single US-based server.

VPNhub’s website is extremely sparse, so tracking down information like how many simultaneous connections are available with their service is difficult.

However, we have done the grunt work for you and can reveal that if you sign up for their Premium package you can connect three devices simultaneously.

Three connections is considerably fewer than the market average. If you choose IPVanish for example, you can enjoy ten concurrent connections with every subscription.

If you opt for the free VPNhub package, you will only be able to connect one device at a time.

There is not much to report on this front either. Under the settings tab there is a kill switch feature available which seemed to work ok when we tested but some others have reported problems. Some say it didn’t work at all, which is worrying if true, but we didn’t experience this personally.

There is also the option to connect to the fastest available server. This is a pretty standard feature but the fact that you can tailor this for specific countries was a nice touch.

But as far as extra features are concerned, that is pretty much it.

VPNhub has mobile apps available for both Apple iOS and Android devices and we gave them a go on an iPhone XR.

From VPNhub’s website and other materials, you get the feeling that their focus is on providing a VPN service for mobile users. The fact that their free service is only available on their mobile apps only serves to reinforce this. 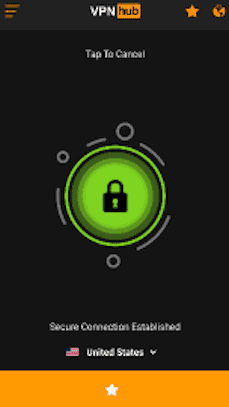 When you download the mobile app it will first pop up a GDPR disclaimer and a link to their privacy policy, about which more below. Accept this and after they try to push you to sign up for their premium service regardless of whether you have previously or not.

Once you turn down these various requests, you will then have to search in the menus to find the login menu, which seems a bit counter-intuitive to us.

When you finally get in, the mobile apps perform in much the same way as the desktop ones. They are clean and relatively simple to use, the settings menu could be designed a little more intuitively, and the map feature is conspicuous by its absence.

The overall impression we had was of a VPN app that was fine but could still be much improved.

VPNhub has apps available for both Windows and Mac desktops. We tested them out using their MacOS app and encountered immediate problems with both the download and login process.

The Mac app did not download and install itself properly onto our Mac. Rather than ending up in the Applications folder, it stayed stubbornly in the Downloads folder forcing us to move it across manually.

It also seemed very reluctant to log in at times. There were occasions when we had to enter the login and password details as many as ten times before it would log in, despite checking they were right and ensuring everything was installed ok.

When we did manage to log in, we were confronted with an app so similar in appearance to StrongVPN that we can only assume VPNhub have been permitted to build on top of their foundations.

The design is clean and straightforward enough, but we missed the homepage map which is such a prominent feature in many other VPNs. The settings menu is also a little hidden away in the top right of the screen too. But aside from that, the app did everything you would expect of it without ever really wowing us.

VPNhub has no other apps available. If you want to use them on things like Amazon devices, smart TVs or routers, move along. If you don’t have either an Android, iOS, Windows or Mac device, this is not the VPN for you.

VPNhub’s connection speeds were mediocre and in this day and age, we certainly hope for more.

VPNHub uses the IPVanish network and strangely they've always offered a reliable and robust service. Quite why the VPNHub speeds aren't up to par is anyone's guess.

We tested their service for a number of days on a regular UK household internet connection. To try and pin down what we were experiencing, we also downloaded a test file from different VPNhub servers.

Our regular connection speed at the time of these tests was 42.19 Mbps. The speeds we experienced with VPNhub were as follows:

As you can see there were some considerable drops in connection speeds especially if opting for a server located a long away from your actual location.

As we noted above, VPNhub offers OpenVPN as standard, but there are two protocols available. OpenVPN TCP and OpenVPN UDP. The basic difference is that TCP offers more stable connections but has slower connections as a result. UDP is faster, but the compromise is less reliable connections.

Both AES-256 bit and AES-128 bit encryption are therefore available. We would always advise people to go for 256-bit unless the slight speed difference is of fundamental importance to you. The increased security it offers is significant and it is usually our minimum recommendation.

VPNhub’s policies are problematic and this is not just because they are vaguely worded and seem at times completely irrelevant.

Their Terms of Service includes references to things like “in-game currency” which suggests they have been lifted from another online company which used them for a very different purpose.

Their privacy policy is quite long and very unclear. Frankly, it left us with far more questions than answers. We do know the company behind VPNhub are based in Cyprus, which is not the best country for privacy legislation but not the worst either.

Which jurisdiction VPNhub falls under and which areas of its service are governed by the privacy policy of which company is extremely unclear.

It is difficult to have too much faith in VPNhub to offer its users absolute privacy protection.

VPNhub has been set up in a hurry and it shows. They have borrowed much of their service from other companies which is never ideal and always leads to confused policies and puts users at risk.

There are some elements of the VPNhub service which are decent. Their 7-day free trial is welcome, their apps are quite well designed and relatively straightforward to use, their encryption is strong enough, and their server network is just about acceptable.

But there are too many causes for concern for us to be able to recommend readers give VPNhub a go.

Their privacy policy is vague and gives cause for enough concern that we would genuinely worry how safe your data would be. Also, connection speeds are mediocre at best, there are only three concurrent connections available and there is a minimal range of features.

Given the high prices charged for their premium service, VPNhub simply isn’t offering anything like the level of service customers will expect. The fact is there are much better VPNs out there and we would advise you to spend your money with them rather than VPNhub.

Check out these alternative VPN reviews