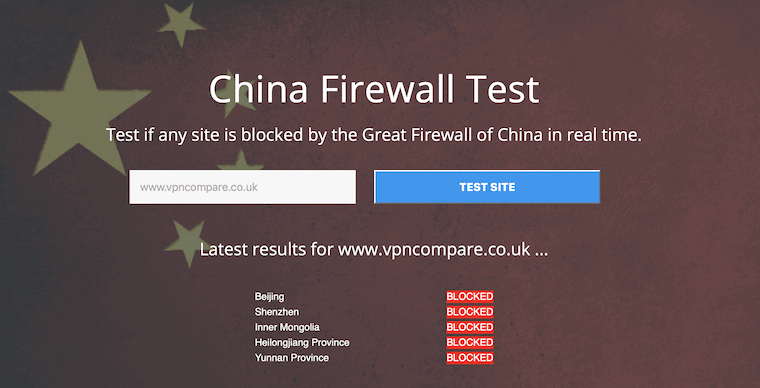 The sweeping internet censorship in Communist China is a regular theme on the news pages of this site and, more often than not, our articles advise Chinese internet users on how to get around their countries censorship by using a VPN.

However, until now, despite the nature of our site and the content we write about, our site has remained available behind China’s Great Firewall.

But that has all changed this week and it all seems to be down to an article we published about Hong Kong.

Last weekend, popular VPN provider Private Internet Access published a blog in which they announced that their service was being blocked in Hong Kong.

Along with a number of other sites, we published a news story reporting the block and making a few suggestions about what Private Internet Access users could do.

This proved to be one of the most widely-read news stories we have ever published and was picked up on by a number of influential people in Hong Kong.

One of those was Charles Mok, Hong Kong’s ICT Legislator and the founder of the Internet Society Hong Kong. He tweeted a link to our story along with a furious denial that any VPN was being blocked in Hong Kong.

As a member of legislature in Hong Kong, it is hardly surprising that Mok was keen to deny the story we were running. The fact that he felt the need to urge his colleagues in the Hong Kong legislature not to block VPNs in the future suggests that it is clearly something that they are considering.

A couple of days after our story, Private Internet Access published a new blog in which they announced that their service was now working in Hong Kong again. At the time of writing, this appears to still be the case.

They have provided no further information so, at this stage, we are unclear whether this is because it was unblocked, there was some technical issue which they resolved, or they found a work-around to the block.

Given the controversy around the story, our editor, conscious of the sensitive political situation, took the decision to take it down from the site and replace it with an explanatory statement. The last thing we want to do is fuel tensions between protestors and the Communist regime in any way.

We assumed that this would be the end of the matter, until yesterday, when we carried out a routine check to see if our site was available in China.

This is something that can be done easily through a number of different online tools. It is a process we carry out intermittently and, as recently as last week, the site was still fully available behind the Great Firewall.

However, that is no longer the case. Multiple DNS checkers confirm that VPNCompare is now being blocked by China’s Great Firewall and is unavailable inside China. We have also asked our contacts on the ground in China and they have confirmed this is the case.

This could be a coincidence. After all, we have written a lot about Communist China and how to use VPNs to protect yourself from their online censorship and surveillance.

But we have been doing this for a long time. Why have they suddenly decided to block us now? We can only assume that it is the Hong Kong Private Internet Access story which has proved the tipping point.

What will we do now?

The first thing to say is how this emphasises the very serious nature of the situation in Hong Kong and the possibility that the Chinese Communist regime will take action to block VPNs, encrypted messenger services, and even the whole internet if it feels it needs to quell the ongoing protests.

This is therefore as good a point as any to stress our total support for the people of Hong Kong in their struggle for freedom and democracy from the tyranny of the brutal Chinese Communist regime.

We would also like to stress that we will not kowtow to such actions by the Chinese Communist Party and its army of online hackers, trolls and online censors who make unilateral decisions over which websites the people of China should and shouldn’t see every day.

We strongly believe that all Chinese people have the right to a free and open internet and if we can contribute to their battle for these rights even in a small way, it is a stand we are willing to make.

We can, therefore, confirm that we will be putting an alternate URL in place for Chinese users in the coming days.

There is no country in the world where VPNs are more important than Communist China and we will continue to do what we can to ensure the people there can access the VPN information they need.