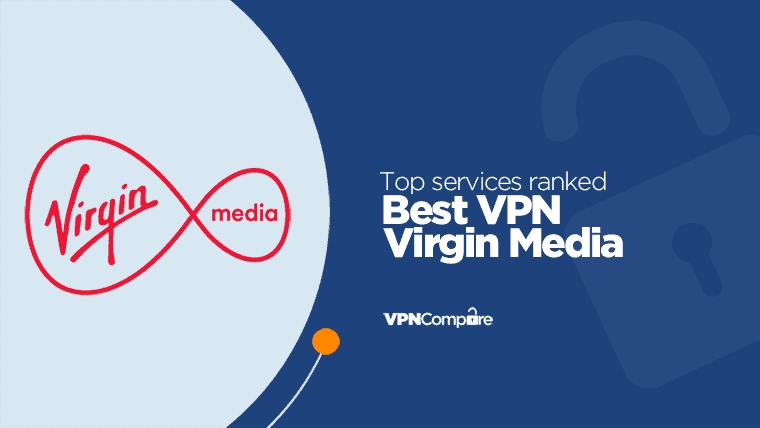 Virgin Media is one of the leading ISPs (Internet Service Providers) in the UK but finding the ideal VPN service to partner with your internet subscription is getting increasingly difficult.

Many VPN providers are slow and unreliable and others are geared directly towards US customers.

Add to the fact some just don't work well with Virgin Media and you've got a recipe for disaster.

Virgin Media blocks access to a lot of content that Virgin Media customers are interested in, such as streaming sites. So, you need the best VPN client that will let you establish a reliable VPN connection, secure your online data, and browse the internet risk-free.

Over the past few years I've been testing a range of VPN services with Virgin Media, mostly due to various Virgin Media blocks, and armed with this knowledge and feedback have concluded the seven leading options.

The seven providers I've selected below ultimately offered the best service at the best prices.

So, if you're a Virgin Media customer, keep scrolling to discover which should be top of your picks.

This is great if you want to watch streaming services like Netflix or BBC iPlayer from the US, SBS from Australia and a whole lot more.

If you find yourself with buffering when streaming video then the unlimited bandwidth and unlimited speeds allowed will come in handy.

A total of five simultaneous connections is allowed giving you the ability to protect your desktop, tablet and mobile in the home.

A massive 30-day money back guarantee is available allowing you to test the service with your Virgin Media subscription, and it has great security features, such as DNS leak protection. As far as VPNs for Virgin Media go, this is one of the best, if not the best in the industry.

It has over 3,000 private servers in over 94 countries, a kill switch, and all kinds of other protections that can shield you from malicious websites, protect you from bandwidth throttling, and if you ever have any issue, you can always turn to its live chat support.

IPVanish performed as one of the best VPNs for Virgin Media Internet Service Provider due to their unbeatable speeds.

Every VPN service will introduce some speed loss but this was minimal when connected to their UK VPN servers.

Torrent and P2P access is allowed on the service which is good news because Virgin Media aren't exactly torrent-friendly.

It also means you can avoid traffic shaping by Virgin Media which usually limits your speeds on Torrents and Usenet in peak hours allowing you to get your maximum internet speed.

Zero traffic logs are stored which means that neither Virgin, the UK government nor anyone else can snoop on what you're doing online.

You also can connect unlimited devices to the one package protecting your whole household.

If you're hugely concerned about your online privacy then it's best to deal with VPNs for Virgin Media that aren't one of the “Five-Eyes” countries.

Five-Eyes countries are the US, Canada, UK, Australia and New Zealand who share information amongst themselves.

NordVPN is registered in Panama which essentially makes them an “off-shore” provider who in theory don't have to play by the rules that “on-shore” providers may have to.

The service stores no logs of what you do while connected and they have “double-hop” servers that encrypt your data not just once but twice.

Naturally, it is an expert in unblocking streaming services, and that includes streaming Virgin Media via your Android TV, as well as all the services and sites blocked by Virgin Media.

VPN.ac are a provider you may not have heard of and you won't often find them listed at other “Comparison” websites.

The good news is they're actually one of the best providers and definitely deserve to be listed in the best VPNs for Virgin Media users.

Testing the service with our Virgin Media account using their UK and Netherlands VPN servers resulted in some of the best download speeds I've seen.

They're not quite as beginner friendly as some of the other services and are more geared towards strong encryption.

If you're a techie then you'll love their policies and encryption standards but if you're a beginner you should stick with ExpressVPN.

You can connect 6 different devices so most devices connected to your Superhub Wi-Fi or Wired connection can be protected with one account.

If you like to stream content from official TV services then a CyberGhost VPN subscription is definitely worth considering as one of the best VPNs for Virgin Media.

They have dedicated servers to unlock all the most popular streaming services and their download speeds are good enough to view in high-quality.

Of course you also get all the benefits of any VPN service too so if protecting your online privacy while connected to Virgin Media is top of your priority list then you're covered.

You can connect seven devices at the same time so if you want to protect your entire family then you're covered and they supply apps for all major devices.

There will be no bandwidth throttling with this premium VPN at your side, and all VPN users will be maximally protected.

It definitely deserves its place on the list of the best Virgin Media VPNs, and it is easily one of the best VPN services for any other purpose, as well.

Nearing the end of the list, we have a virtual private network known as Surfshark.

Like the others, this one offers everything you need to have in a reliable VPN, from DNS leak protection to the strict no-logs policy and safe internet traffic. It unblocks Virgin Media, of course, as well as anything else.

Streaming services like Amazon Prime Video, BBC iPlayer, but also Virgin TV, and even torrent sites can be accessed.

It can even unblock 30 regions of Netflix, and all the while keep your online activity confidential and protect you from malicious websites. Not to mention that it has military-grade encryption, a kill switch, it offers unlimited bandwidth, and, it is one of a rare few VPNs that offers unlimited simultaneous connections.

That means that you can use it to protect an unlimited number of devices simultaneously. Also, this is likely your best stealth VPN option.

It has a total of 3,200 servers around the world, located in 65 different countries, and you can connect to any one of them from anywhere in the world.

In the UK, Surfshark has servers in London, Manchester, and Glasgow.

One issue that you may encounter is that its system, which is meant to identify the fastest servers that can secure your online presence and increase your VPN speed to the maximum – does not always seem to work.

Other than that, it is a good VPN that can offer private internet access, hide your actual location, and protect your personal data during internet usage.

Lastly, we have Private Internet Access, or PIA, a US-based VPN that has been used for pretty much everything over the years from accessing any streaming service to using VPN apps to hide from your internet provider, employing IP leak protection, and, of course, it will serve you just as well for unblocking Virgin Media.

This is an old and reputable VPN even though it is located in a data-hungry country such as the US, which many already see as a major flaw.

Still, PIA went through audits that have proven that it is legitimate, so if you wish to access Virgin Media content, it can definitely deliver.

It has a kill switch to keep your identity safe, it can access and unblock almost any streaming service that you need, even if it is blocked by Virgin Media, and it has pretty fast connection speeds.

In terms of servers, PIA has them in 78 countries, and each subscription is accompanied with a 30-day money-back guarantee.

Also, you can protect and use up to 10 devices at once. So, if you need to unblock Virgin Media, this is definitely a VPN to consider.

As far as VPN websites go, it might work a bit more on its transparency, but other than that, it is considered one of the best VPN services around today.

How to choose a VPN for use with Virgin

Below we've listed a few benefits of using a VPN with Virgin Media.

Torrent use, Usenet and even some video streaming fall into traffic shaping.

When you use these services your speed is automatically reduced. Using a VPN allows you to disguise your traffic so they can't reduce your speed.

The UK has one of the most censored internet services in the developed world.

Many websites are blocked on the Virgin Media service for copyright reasons. Even if you don't download any files you can't access these websites.

A VPN allows you to access any website on your Virgin connection and avoid censorship. Remember that accessing copyrighted material is illegal so only stick to content that is legal in your location.

Websites from outside the UK that often show entertainment content such as SBS from Australia, CBC from Canada or Peacock from the United States are often restricted to viewing from within their country.

When using a VPN for Virgin Media from a provider such as ExpressVPN you can alter your virtual location and appear in another country allowing you to stream overseas content on Virgin.

New powers in the UK known as the IPBill allow the government to legally snoop on your Virgin Media internet connection.

Using a VPN encrypts your information as it passes over your Virgin Media connection so no one can read what you're doing and the websites you visit can't be logged.

How to enable a VPN on your Virgin Media Superhub

Before you get started you should consider which VPN protocol you want to use with Virgin.

There are three main protocols available.

With a VPN service such as ExpressVPN you can select the protocol you want to use in the Settings -> Connection area of their software.

We always recommend OpenVPN or Wireguard/Lightway because they are the most secure and when using them on ExpressVPN with Virgin Media the speeds are excellent.

OpenVPN and Wireguard/Lightway work out of the box on Virgin Media which makes them the easiest to use and they're also the most secure which is why it makes sense to select these.

If you need to use PPTP or L2TP for a specific reason you'll need to enable their use on your Superhub. You can find instructions on how to do this below. 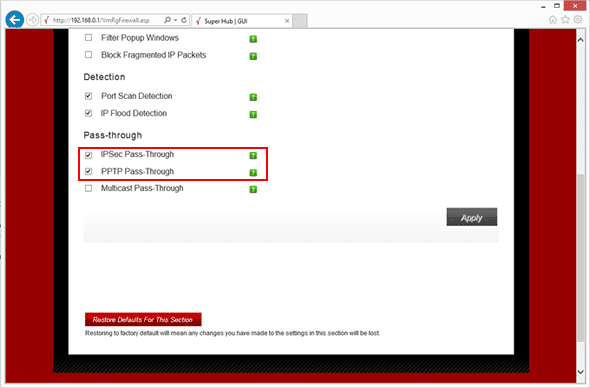 You will now be able to go back to the VPN software on your device and connect with both PPTP and L2TP protocols.

Remember though that you don't need to do this for OpenVPN or Wireguard/Lightway which will work out of the box.

Without a doubt, the best VPN for Virgin Media right now is ExpressVPN because you get more for your money.

You don't really need to overthink it though. If you're still confused simply choose any of the seven above as they're among the best VPNs to watch Virgin Media with, you really can't get it wrong.