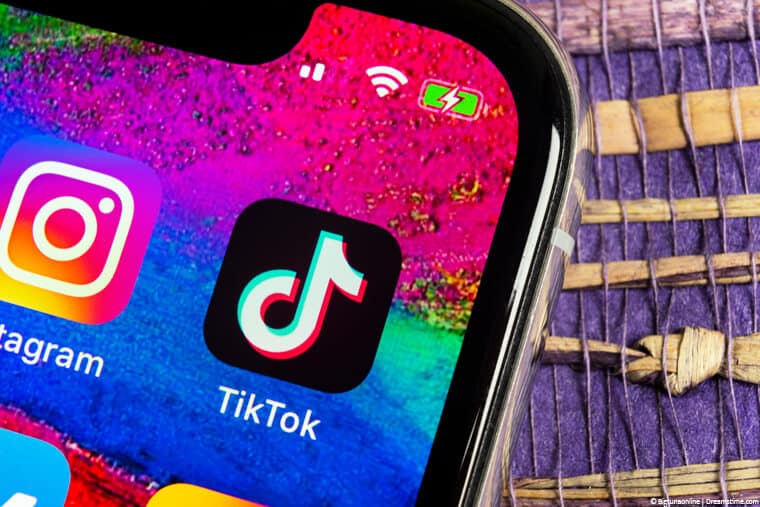 TikTok is the famous video platform that started conquering the world a few years ago, and after it became a trend – it never really backed down.

But is TikTok blocked in your country? Or at the very least your network, such as school, university or work?

This can be a real pain if you want to catch the latest short videos or meme.

As the app is so popular right now, it has millions of users, but that still doesn't mean that it is equally available to everyone.

As an entertaining platform that people like to visit, TikTok is, naturally, blocked by schools and universities on their local networks.

Not only that, but even entire countries block it due to fears of privacy.

Thankfully there's a super simple way to use TikTok in any country on any network.

All you need to do is keep scrolling down and I'll tell you exactly which VPN apps to use with TikTok to access it securely anywhere and why they're the best.

Next, we have CyberGhost – a service with a network that is almost equally as large as that of ExpressVPN, but with more than twice the number of servers.

CyberGhost covers around 90 countries, but it has 6,200 servers around the world, which makes its network one of the largest ones in the industry.

Whatever country you're in, you'll be able to connect locally to unblock and use TikTok privately.

It is also one of the top VPNs when it comes to security and privacy features, including the strongest encryption and protocols, a kill switch, as well a range of easy to use apps.

It can be used on all popular platforms, including Windows, Mac, iOS, Android, Linux, and more, so you can use it to watch TikTok at any time, place, and from any device.

CyberGhost also stands out for having one of the largest money-return guarantees in the industry – one that lasts as long as 45 days. Add excellent speeds, zero-logs policy, and affordable prices, and they make a compelling choice.

In the third spot, we have NordVPN – a Panama-based VPN service that has another rather impressive server network, which includes over 5,000 servers located in 59 countries around the world.

NordVPN is another VPN provider that is commonly used for unblocking all kinds of online services, websites, and alike, which means that it is certainly up to the task when it comes to unblocking TikTok.

The service is also known for its excellent security, although it did have a slight security blip in 2019 which you can read more about here.

Its prices are reasonable as well, and it also has a 30-day money-back guarantee. After the security incident, NordVPN recommitted itself to improving its security with a range of new features.

In the end, it all means that you don't have to worry about privacy, security, or anonymity when using TikTok.

Next, we have VyprVPN, which is yet another service trusted by millions of users for unblocking online content.

VyprVPN also has an advantage over other services which lies in the fact that it features servers in countries that not many other VPNs cover, such as Russia.

It also runs the majority of its network which VyprVPN themselves says gives them an added security advantage.

On top of that, VyprVPN features excellent speed and privacy features, as well as competitive prices. It will let you combat censorship and bypass geo-restrictions, network restrictions, and any other kind of online issues.

Also, it is worth noting that its server network spans throughout 70 countries, and it offers over 200,000 IP addresses. However, it does have fewer servers than some of the earlier listed providers standing at around 700.

Apps are available for all major devices and there's a 30-day money back guarantee available too.

Last but not least, we have Surfshark – another privacy-friendly VPN that will let you unblock TikTok in an instant wherever you happen to be.

It's an up and coming VPN that has been receiving high praise for the quality of their service.

Just like VyprVPN, Surfshark also has servers in many unlikely locations, which is not only useful for situations where you want to unblock content from such regions, but also for instances when these servers are the closest to you.

As you may know, closer servers indicate higher speeds – which Surfshark already offers by default.

Its server network is not as vast as some others on the list, but it is still pretty impressive, with over 1,040 servers in 61 countries at the time of writing.

Add secure encryption and privacy features, and you have one of the top VPNs in the industry at your disposal.

Best of all, it doesn't have a limit on the number of devices on which you can use it simultaneously, which is great for unblocking TikTok over many devices.

In the final place, we have IPVanish, a well-known and respected VPN services.

Apps are available for all the most popular devices so whether you use TikTok on an Android, iPhone or some other device you'll be covered.

We especially like their unlimited concurrent connection limit. This allows you to use one service on as many devices as you want. So not only can you access TikTok securely, but also secure all your other devices.

Servers are available in 75 different locations across the globe which encompasses some 50 countries. It's not the largest amount but it's certainly not the smallest either.

The service like most offers a 30-day money back guarantee so you've got plenty of time to test it and see how it works. If you find it's not for you, then you can get your money back.

Will a VPN unblock TikTok?

Yes, VPNs are capable of unblocking TikTok, as the service is not geo-restricted, but rather, only censored.

That means that you do not need servers in a specific location, nor do you need to make sure to use a VPN because of a block TikTok has imposed.

TikTok is available around the world, but you may find certain countries restrict access or on networks like your school, university or work it's unavailable.

This means that any VPN on the list is suitable for enabling access to TikTok. Choose a location nearby and skip past any restrictions against the app.

Better yet, if a local network only blocks it, you can connect to servers within your own country to ensure the best speeds, provided, of course, that your country doesn't prevent it.

Is using a VPN with TikTok safe?

If you have privacy concerns about using TikTok through a VPN, you can rest easy.

VPNs are safe enough that they can protect you even if you are using public hotspots that are filled with hackers.

With that in mind, using it for unblocking TikTok and hiding your sensitive data at the same time is a no-brainer.

The VPN's encryption will make your video watching and messaging entirely unreadable for others. At the same time security protocols will hide it from view by creating a secure tunnel around your app usage.

No matter what you do or watch with a VPN enabled, your privacy will be secured, and no one will know what you are doing apart from yourself.

TikTok is one of the most popular apps worldwide right now, but unfortunately, some countries are blocking it due to privacy concerns.

In addition, even if your country did not block it, it is possible that your school, university, workplace did, in an attempt to eliminate distractions and make you more productive.

In fact, even certain locations like cafes, libraries and others can put blocks on the usage of the app.

To avoid this, you'll need a VPN.

After testing plenty of different options, I settled on CyberGhost as the best to unblock TikTok and use it securely.

Not only is it quick to set up and straightforward to use, but you also get more for your money.

I would love to hear your thoughts. Did you use CyberGhost and agree? Or did you find another VPN that was even more suitable? Let me know in the comments section below.