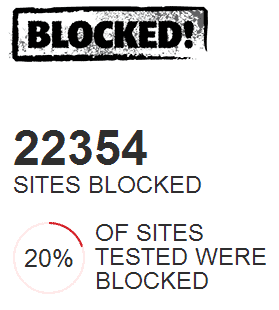 Although on the face of it a rather good idea I discussed at length the possible negative ramifications in August 2013 in my article, UK Web Filter, A Step Too Far?. It was also heavily criticised by anyone with half an ounce of technical know how and at the forefront of that voice was the Open Right Group.

Fast for forward to July 2014 and the launch of their new website Blocked.org.uk. As of the date of this article being published the site is reporting that 20% of 22354 sites already checked within less than a day of the site being launched are blocked by at least one of the ISP adult filters.

My personal view is that the adult filter while good in theory is wrong in implementation, I looked at such reasons in a working example titled, How to bypass BT family filter and why it is wrong in the first instance in which the simple act of using such a service like a VPN (or even proxy) can easily allow the filters to be bypassed and how adults may assume that due to the filter being in place their children are 100% secure online without their careful eye being needed any longer. If the filter can block sites that it shouldn’t be in 20% of cases then the possibility of it getting it wrong when it should be right may be an equally worrying amount.

Our privacy on the internet has become of paramount concern and VPN use is becoming a regular occurence. The Guardian newspaper reported in January 2014 that 28% of the online world use some sort of privacy tool. In the UK alone the reach was 17% which as a portion of all online users in the United Kingdom is quite impressive. So while privacy tools such as VPN use is nearly 1/5th of the online population in the UK and no doubt rising, it appears strange that through our own research we have discovered that 16 out of 22 of VPN providers websites listed on our site are blocked by at least 1 or more adult filter in the UK.

In fact only 6 are free from any blocks and include VyprVPN, VPN.ac, EarthVPN, StrongVPN, IVPN and ExpressVPN.

More shockingly the remaining 8 providers are blocked on as many as 4 to 6 filters and include PrivateInternetAccess, IPVanish, PureVPN, Overplay, CyberGhost, Proxy.sh, HideMyAss and IronSocket.

There are no clear ways to determine why some sites are blocked by more than others but the inclusion of certain keywords or terms may play a role in the filter decision. With such disparity between providers and their blocked status it only reaffirms the poor job that these filters are doing when all 22 sites are within the same industry and in general will mainly cover identical topics, words and phrases throughout their sites.

The upshot of these findings is not only that the UK adult filters are not working as they should but they are also potentially restricting access to signing up to services which protect your privacy and your safety online.