Malaysia, a place of beauty best known for its crystal clear waters, white sands, delicious cuisine and not forgetting the magnificent Kuala Lumpur with its sky-scraping twin towers.

While it has many things to offer to any budding tourists, one thing that lets it down is the government's censorship of the internet.

Not only do tourists struggle to access such sites while travelling, but locals have the same troubles too especially when it comes to trying to access popular films and TV shows, as Malaysia has a rather extensive list that is banned.

However, even with its stringent censorship, there are ways in which you can access such websites while keeping yourself and your data secure using a VPN.

But which VPN should you choose out of the vast sea of options?

In this guide you'll learn what your best options are, and where you can get them from.

When it comes to speed, ExpressVPN is the fastest around and it's ideal for streaming videos, browsing the web or playing the latest video games without a problem.

While it boasts the fastest speeds around, it's also known for its powerful 256-bit encryption that comes as standard. Plus it has over 3,000 VPN servers available from 160 locations all around the globe including in Malaysia itself and other local countries such as Thailand, South Korea, Vietnam and many other places.

With each subscription of Express VPN, you can connect five different devices at the same time, meaning that all of your data will be kept as anonymous as possible and safe from any government snooping that may be going on.

And best of all, no activity or connection logs are kept of their users, meaning that you and your information are safe in their hands.

CyberGhost VPN has one of the largest networks in the industry; you'll have access to over 5,700+ servers in 90 countries all around the world.

Ten of which are located in Malaysia, 19 in nearby Thailand and 10 in Vietnam, which means you won't have to worry about connection speeds. There are also plenty of other countries nearby and further afield for a variety of needs.

CyberGhost permits up to 7 different devices to be connected at once, which is ideal for households with multiple devices or if you're travelling with a lot of tech.

There are apps for most of the popular devices including Windows, Mac, iOS, Android and Linux.

It has an attractive price point and offers a 45-day money back guarantee, which is one of the best around.

Our 3rd place goes to NordVPN, which has grown to become one of the most popular VPNs on the planet that regularly has fantastic offers and a standard 30 day money back guarantee.

It has local servers in Malaysia that will keep your data secured, allowing you to browse the internet in safety while maintaining good speeds.

With NordVPN, you can connect six different devices at once and has apps for all popular devices and extensions for most popular browsers.

There is one downside to using Nord; they currently don't allow the use of Paypal for payments so you'll need to give them a miss if that's your only payment option.

Next up is Surfshark VPN that comes with some fantastic security features as well as a server size of over 1,040+ within 61 countries.

The biggest stand out feature from Surfshark is that it allows you to connect an unlimited amount of devices to your account, meaning you will never have to use an unsecured device ever again.

With dedicated apps that can be used on all popular devices that unlimited connection promise will come in handy if you're a heavy user of tech.

Prices are some of the cheapest around but you'll need to commit to their 24-month package to take advantage. Monthly prices are somewhat expensive but do mirror what many others charge for short periods.

In our 5th and final spot, we have VyprVPN.

With servers in Kuala Lumpur, you will get the best download speeds possible due to the local connection.

Their 256-bit security will keep your information safe while you are surfing the web. Vypr is known for their reliability and has been around for a good while meaning they know what they are doing when it comes to your security.

Plus they've had their service audited to confirm their no-log policy is watertight.

As mentioned with the other services, there is a 30-day money back guarantee, which is more than enough time for you to test the services on offer to decide if it's suitable for your needs.

How did we select our choices?

While there are some 500+ VPN services to choose from, not all are suitable for use in Malaysia.

Here are the factors we used when considering our choices:

When selecting a VPN, local connection points are vital as they will ensure that you get the fastest connection speeds.

Connecting too far away from Malaysia can lead to slow speeds and buffering, especially if you're somewhere remote with a poor internet connection.

Nowadays the majority of people surfing the web will be doing so from a phone, tablet or laptop, which is no different in Malaysia.

So we have ensured that all of our Top 5 have easily accessible apps that make using a VPN a user-friendly experience.

When it comes to price, everybody likes a bargain.

In Malaysia where salaries can be a lot lower than in the western world where VPN services are usually priced, our choices of VPN will be affordable even if you're a local or travelling on a budget.

Plus each of our selection offers money back guarantees which take away any doubts you might be having about investing in a VPN.

The priority when using a VPN is ensuring that your data is safe and secure, especially from government entities that could be snooping on your data.

So VPNs that don't store your information are all that we will ever recommend and are at the forefront when making our decision.

Some of these like ExpressVPN have had their claims audited which gives an added layer of trust.

Why you need a VPN for Malaysia

Everyone's use for a VPN will be different.

Whether you want to stay secure or simply stream the latest American Netflix movie. Below are some of the most common reasons:

In Malaysia numerous websites are currently being blocked such as pornography, political websites, gambling, fiction sites, religious and even some music sites. 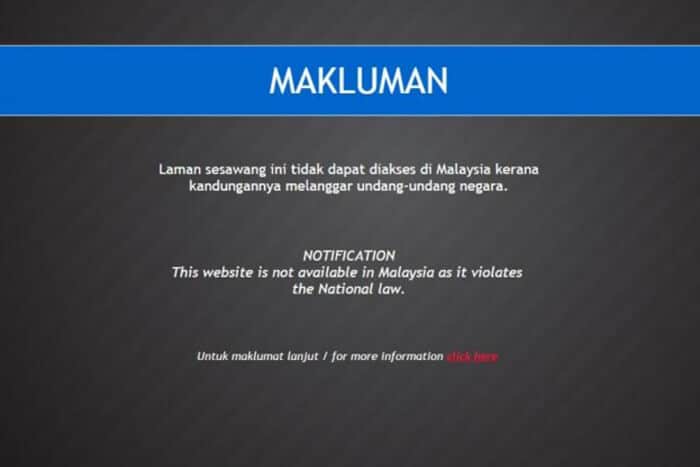 A typical block message in Malaysia.

Not to mention the large list of banned movies and TV shows that will not be accessible to the local population or visitors.

That is of course if you're not using a VPN.

Want access to your favourite Netflix TV shows while you're travelling? Or perhaps you are a Malaysian local who enjoys binge-watching the latest seasons of South Park.

If so, then you will need a VPN so you can access other regions Netflix libraries.

No longer will you only have access to one library of Netflix shows/movies, but you'll have any regions libraries right at your fingertips. Hours and hours of content that will keep you entertained for years to come.

In Malaysia there's quite a considerable freedom of speech issue and when a country has such a firm policy towards freedom of speech, controlling the internet and what people can see is common practice.

Due to this, there tends to be a high amount of government snooping going on and the monitoring of people's online activity.

As a result, everything you do online is logged and is accessible by the government.

This includes what websites you've visited, how long you where on the site for, your location, any downloads or uploads… the list goes on.

If they can monitor it, they will. A VPN will protect you against such snooping.

1) Is VPN use illegal in Malaysia?

No, there are no laws against VPNs being used in Malaysia.

In fact, not many countries restrict the use of VPN services because they're used by corporations to carry out business securely.

2) Is there a free VPN in Malaysia?

While there are some free VPNs available, we strongly recommend against them as they tend to be a lot less reliable and you never really know where your data is going which is a concern when it comes to online security.

There have been cases where companies offering free VPNs have been secretly collecting your data.

Another problem with these types of services is their tendency to use your internet connection to power the VPN for others.

This is extremely dangerous as any illegal activity done by others could be linked to your internet connection, which spells trouble for you.

As if the above wasn't enough to put you off, but a massive 38% of free VPN software has been found to contain malware and other damaging code that can track your data and sell it on to turn a profit.

3) Should I use a local Malaysian VPN service?

While using a local Malaysian VPN service might seem like a great idea, you might land yourself in a bit of trouble if you aren't careful.

Ever heard of a Honeypot?

Well, unfortunately, local governments of censored states are known to set up services that will lead you into a false sense of security before they come knocking on your door and show you all of the data they have been collecting on you.

Which could mean a hefty fine or at worst a prison sentence, not such a great idea now is it?

4) Which VPN works in Malaysia?

All of our top five VPNs work in Malaysia and they all have local servers that will ensure that you get the fastest speeds.

Using another VPN service that uses servers that are further away will mean that the internet speed will be less than optimal.

If you're like me, you hate slow internet speeds.

If you want to protect your data and personal information while residing in Malaysia or perhaps you just want to access websites and content from another country. Then you will need a VPN.

Remember, not just any VPN will suffice.

You need to make sure that it's reputable, reliable and doesn't store or share your data.

You'll want to make sure it has local connections available so that your internet speed isn't painfully slow.

Our recommendation is to use ExpressVPN, but any of the five above will do. All the recommendations offer a money back guarantee so if you sign up and find the service isn't suitable, you can get a full refund.