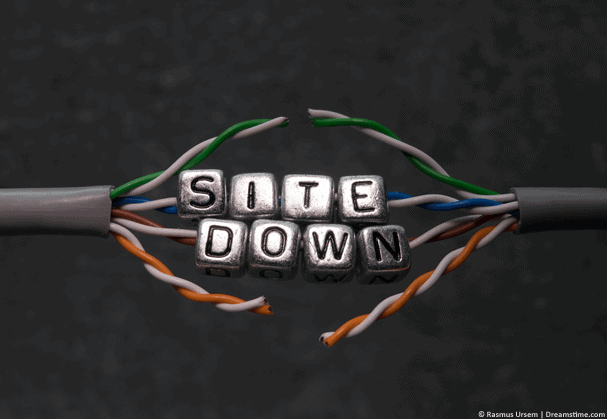 But one little-known fact is a VPN can also allow you to speed up website access and even fix issues with accessing sites or file downloads from websites.

One of the major factors of speed and the reliability of your access of websites comes down to the route your data takes to access that website.

This is mostly based on your internet provider but in between you and a website many different points are involved. A VPN can help you change the route your data takes and as a result, speed up or make your site access more reliable.

Slow and unavailable websites can be fixed

When you access a website your request is first passed to your ISP who then bounce it through a few different computers of their own known as “servers” before passing it to other servers owned by other companies.

In an ideal world, the request or “data” should be passed through the quickest route to the website you requested to access.

The website you’re requesting is also held on a computer somewhere also known as a “server” and your request jumps through different servers to get there, each jump is known as a “hop”.

Unfortunately the internet isn’t always ideal. Sometimes agreements between various providers of servers known as “networks” mean your request doesn’t always take the fastest route and while it still might be fast, it could be faster.

Another issue is sometimes servers on the route can have issues which slow down your requests or even blocks them entirely, this is what leads to inaccessible websites or slow access. A VPN can fix some of these issues.

How can a VPN speed up websites or make them work

A VPN works by first passing your data or request to your ISP and then on to the server of the VPN service.

This VPN server can be anywhere in the world and your data takes a different route to firstly arrive at the VPN server. From the VPN server it then takes the quickest route to reach the data you requested such as the website you want to access.

Using a VPN changes the route your data is taking and as such can allow you to bypass a slow route, problematic servers or other issues on the network which you may have hit accessing directly without a VPN.

Take for example the image below. 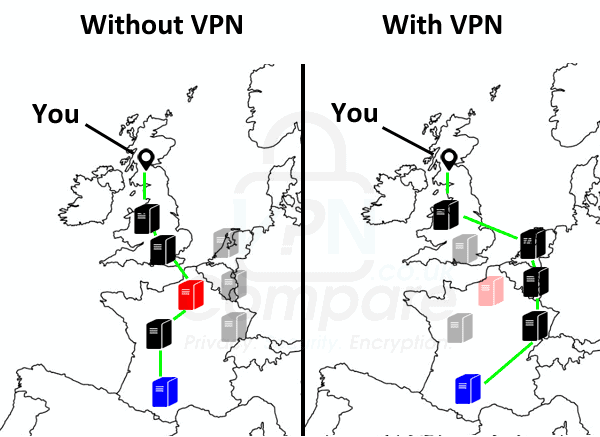 The above is not 100% accurate but is a representation for understanding the process.

In the first image a server represented by the Red Server icon is problematic and causing a slow connection.

In the second image your data is first passed to your ISP who then pass it via a different route to the VPN server. It will then take it’s own best route to reach the server holding the website you’re wanting to access.

Essentially this allows you to bypass the problematic server.

On many occasions websites are not accessible due to issues outside of your control but by using a VPN you can avoid those issues and so a website that is down may still be possible to be accessed using a VPN. It all comes down to the servers in the route your connection takes.

Of course nothing is 100% and if the server holding the actual website is down then there is not much you can do about that.

The whole network that makes up the internet often makes use of caching to speed up the access of websites. This is especially true if they’re in far flung corners of the world. It is this caching system that can result in a site showing as “down” when in fact it’s still accessible from other corners of the world.

A VPN allows you to re-route your connection so it takes another path or accesses the site in question from a different cache.

Another scenario is a website is delivered by a CDN network that holds the same website in different locations across the world and depending on where you are depends which CDN server serves up the site. If one of the servers in your local CDN is down, you could have trouble accessing a website. With a VPN you have the possibility of tapping into other regions to access the same site.

A VPN is not a magic bullet for accessing websites that are “down” or offline. It’s also not a fix-all solution for speeding up websites.

However, a VPN can in some instances allow you to access websites that appear down when connecting from your standard internet connection. It can also help you access websites faster in some but not all cases.

If you’re having trouble accessing certain groups of websites, your speeds are slow or you can’t download files from certain sites then a VPN may be the answer.

A few recommended VPN providers are IPVanish, NordVPN and ExpressVPN who offer some of the best services with good speeds. They also have money back guarantees so if they don’t help you access the sites you want or improve their access speed then you can simply get your money back.