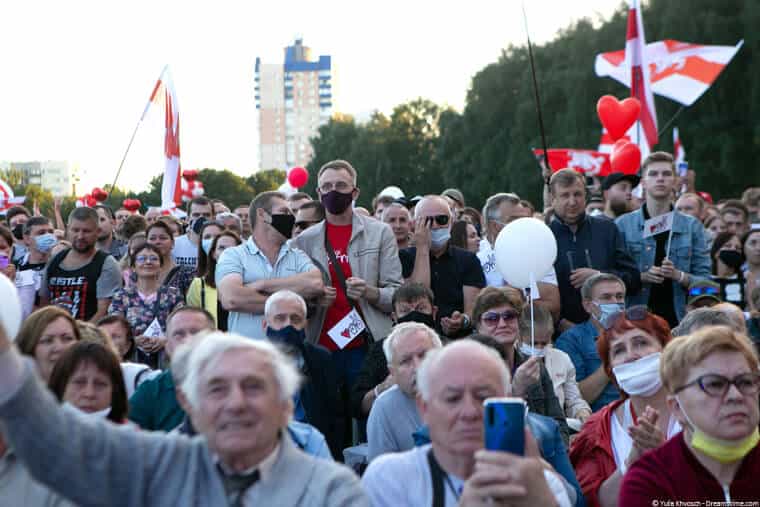 VPN technology has often been used in situations when people wanted to unblock geo-restricted or censored content.

However, their usage skyrockets whenever there are protests during which the governments attempted to limit the citizens' ways of communication.

The ability of VPNs to stabilise internet connections comes into play in such situations, showing just how much the people depend on the web to communicate and organise.

Belarus cuts off the web as protests continue

The most recent example of this, according to Coindesk, was seen in Belarus over the past several days.

The country recently held presidential elections, and the results of the vote appear to be contrary to what many have expected.

Namely, the elections were won by a 26-year incumbent Alexander Lukashenko, which caused many to believe that the results were rigged. Many among the Belarus citizens believe that the real winner is the opposing candidate, Svetlana Tikhanovskaya.

The election results sparked massive protests, where countless citizens took to the streets to show their displeasure. Meanwhile, some factory personnel also went on strike, uniting against the supposed injustice.

Coincidentally, at the same time, the entire country seems to have lost its internet access, although online payments continued to work without issue, according to local reports.

Lukashenko himself denied being responsible for the internet accessibility issues, while the country's primary internet provider, Beltelecom, explained that it was simply overwhelmed.

Meanwhile, on social networks, some people started sharing the estimated price of the total internet shutdown in the country, with assessments stating that it could be as expensive as $56.4 million, or around 115,093,381 Belarusian rubles, per day.

The cost of disconnecting the Internet in Belarus: 56 401 874 dollars per day.
?????@netblocks #Belarus #internet #blackout pic.twitter.com/3P36w1dfsP

Relying on VPN, proxy, and Telegram

The situation did not get better over time, and as the third day of protests kicked off, people started reporting problems with their mobile internet connections, as well. This indicated that cell phone services might be the next to be cut.

This is where VPN technology came into play, allowing people to stabilse their connections somewhat, and continue communicating, organising, and sharing updates. Another thing to note is that a popular messaging app, Telegram, also remained available.

Telegram has been crucial for communication during protests in countries around the world. Its CEO, Pavel Durov, has always been known as someone who despises censorship and the use of the internet against the people.

He commented on the events in Belarus, stating that the company enabled its anti-censorship tools in Belarus, and so Telegram managed to remain available for the majority of the people there.

He added that the connection remains extremely unstable and that internet access sometimes gets lost completely.

We enabled our anti-censorship tools in Belarus so that Telegram remained available for most users there. However, the connection is still very unstable as Internet is at times shut off completely in the country. https://t.co/eA4S6Zz36H

Even so, Telegram became a crucial tool for coordination, and the most popular channel that Belarus citizens are using seems to be NEXTA.

This is where all the updates regarding the protests are being posted, and where most go to learn about the current situation.

Anti-censorship tools usage spikes up over the weekend

Another tool that people have started using is a proxy service called Psiphon.

Psiphon is an open-source proxy server created by the University of Toronto and the Citizen Lab. It recently saw a massive spike in usage in Belarus. Only five days ago, before August 8th, the service saw zero connections from the country.

These days, over six million connections were established in Belarus, indicating that this is one of the main go-to services for the country's internet users.

This also made Belarus its largest user, followed by Iran, and Saudi Arabia, in the third place.

At the same time, educational content that explains how to use anti-censorship tools also spiked in Belarus. The country's people continue to test various solutions and then update the rest of the citizens on what may still be working.

At the same time, some premium VPNs started offering free services to Belarus users, such as TunnelBear and atlasVPN.

Blocking the internet has become a common strategy whenever governments of various countries saw significant protests.

In fact, this situation was even predicted by the Security Council of Belarus' secretary, Andrei Ravkov. He stated that internet access could be blocked if there were ‘provocations' during the elections.

With the country's internet connectivity depending only on a handful of providers, this would be rather easy for the authorities to do.

Many security experts, such as Alexey Lukatsky, noted that this is likely a deliberate decision from the authorities, rather than the infrastructure problem.

He also added that the country is still not wholly unplugged, otherwise even VPNs and proxies would not be able to help much.