Why using a VPN for cheap flights is bulls**t 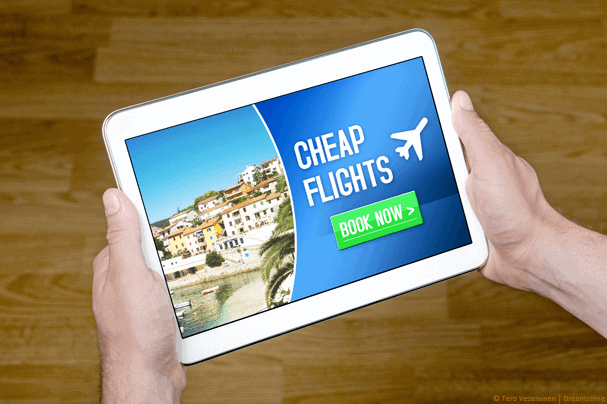 Buy a VPN – get yourself cheap flights!

It's what headlines claim but the reality is far different.

I'm a huge advocate of VPN use and the things they can do are vast. From protecting your online privacy to allowing you to access geo-restricted content from around the world and a whole host more.

A VPN is definitely something you should be using across your computer, mobile and tablet devices.

However, getting cheap flights isn't one of those reasons and it is that which I'm calling bullsh**t on.

Cheap flights using a VPN are far and few between

We would all love to spend a couple of pounds (or dollars) on a VPN service and save the $600-$800 on flights that some articles and even VPN providers claim is possible.

However, the reality is completely different and the bottom line is, these don't exist.

The whole cheap flight information came about 2-3 years ago and in all that time I've never actually managed to find a cheaper flight resulting solely by using a VPN.

Sure I've found cheaper flights by shopping around, opening my web browser in inprivate mode and a few other tricks but never has it been because of using a VPN connecting to some obscure location.

How a VPN finds “cheap” flights

If you've seen the claims and even the associated screenshots for “proof” then you've probably seen hundreds of pounds or dollars savings taking the same flight. All magically achieved by using a different VPN server.

What in reality is happening is a flight is a standard price in the UK or US and then the “research” involves changing to some obscure location around the world and searching again finding an incredibly inflated price.

Rather than the “research” base price being the already low price found on a UK or US site, the base price is then used from searching the price in the Ukraine, Zimbabwe, Timbuktu or…. you get the idea.

The claim is you can then switch to a US VPN server and make the saving.

Sure – that's great if you're in Timbuktu in the first place. If you're reading this site then you're probably already in the UK or US so a VPN can essentially make your flight more expensive by searching around.

There have been a handful of VPN providers and other related VPN websites that have made the same claims over the years.

Often it's just the same regurgitated information with little evidence. Someone said it, so someone else copied it as truth.

SaferVPN who are by no means alone in their claims posted an article as recently as August 2017 stating they saved $406 by using their VPN service to change servers. 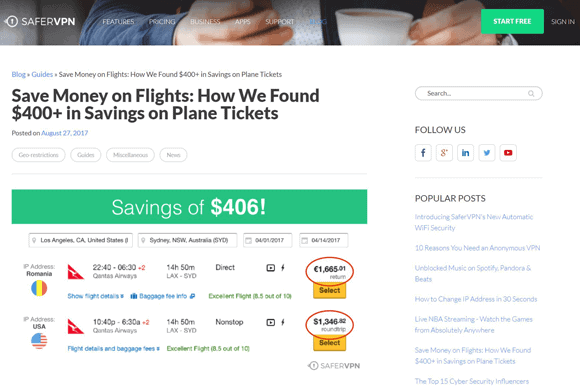 SaferVPN gives their contact address in New York, United States which means their original price search would have been the US one. So basically they've managed to increase their flight price by $406, all by using a VPN.

Bargains not available to you

It's true, flight prices, hotel rooms, tours and other travel related services are cheaper in different regions and very occasionally you can stumble across these when using a VPN.

However, the likelihood of these being available to you based on other factors is slim.

The difference was the site advertising it was one I had never heard of, the more expensive prices were all on the usual suspect websites, Expedia, Hotels.com, Booking.com etc.

After some initial scepticism and a lot of research to ensure the company was legitimate, I booked.

A few hours later I received an email to inform me that price was only available to Chinese citizens holding a mainland Chinese passport.

Even though nothing of the sort was mentioned on the booking site which was based in Singapore and who gladly took my payment from a UK registered debit card.

The result being that 2 days of correspondence took place which at first I was informed I would be charged a cancellation fee for a room I couldn't check into being a non-Chinese citizen. After some lengthy argument, they finally agreed to refund the original payment, cancellation fee free.

The likelihood is, by using a Hong Kong VPN server I was able to see deals restricted to viewing from that location.

Cheap flights and hotels using a VPN are bulls**t

The conclusion of finding cheap flights, hotels and other travel services is, it's generally bulls**t marketing.

While you may find some deals cheaper there is a good chance it wasn't intended for you in the first place and you'll have trouble availing such a deal even if you do manage to pay for it.

If you're in what is considered a “poorer” country where travel is less frequent then you may on very rare occasions find a cheaper deal, if you can book or make use of it is another question.

My total successful cheaper bookings using a VPN over the past 3 years since such information was made public, zero. The total time I've wasted changing servers and searching and searching in obscure locations is definitely in double digits.

How to find cheaper flights, hotels and more

You'll be much better searching for flights and hotels using the InPrivate or InCognito mode of your web-browser if you've previously searched for the same flights.

Searching three or four different comparison sites and then comparing the price on the hotel or airlines own website.

Contact local travel companies and agencies who can often offer prices not available online. Yes, I found a flight $40 cheaper at a local travel agent than the “cheapest” flight on well-known flight comparison site Skyscanner.

In all honesty, using a VPN is essential in today's insecure online world – however, just not for booking your flights!