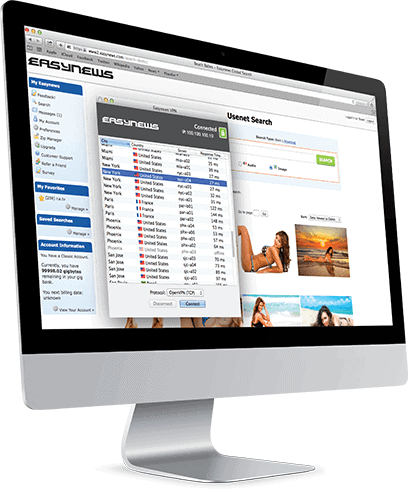 This week Easynews one of the largest providers of Usenet services announced they will be adding a VPN option to their service.

Long before torrents and P2P networks existed a system known as Usenet was the go-to place for both forum type discussion and over time, file sharing. Unlike P2P, Usenet distributes messages across the globe but not in a Peer-2-Peer manner. Due to the way Usenet works services like Easynews appeared to aid storing files for longer periods of time and easily index them in a better manner than was possible from places such as your ISP.

Usenet soon became the place to be for all your download requirements of both legal and otherwise software, games, movies, and music. The world has since moved on and while most people now share files via P2P networks Usenet providers like Easynews have found a special place in many users hearts who still flock to Usenet to download files.

With data breaches and WiFi security rather lacking Easynews have introduced a cheaply priced VPN service as an added extra on top of their NNTP and browser-based Usenet service.

The VPN service is available to both current customers and those looking to sign up. Easynews moved to offer an HTTPS connection some years ago but those worried about snooping from their government, ISP or others will now be able to rest assured that their whole connection including downloading will be protected and anonymous. The Easynews VPN will add protection to users who download via NNTP as previously data transferred via this protocol could, in theory, be spied upon.

Who is Easynews VPN for?

Easynews customers are able to trial the new Easynews VPN service until May 12th, 2015 after which it will be offered completely free to those with “Big Gig Plan” accounts and for just US$2.99 to those who have their “Classic Plan” or “Plus Plan” accounts. A basic Easynews account costs US$9.98 plus $2.99 for a full VPN service which makes their Usenet + VPN offering cheaper than some VPN providers alone.

Full benefits of the Easynews VPN service include :-

Those who don’t wish to take up the Usenet service can also access the Easynews VPN service as a stand-alone package for $11.99 although with an Easynews + VPN package costing $12.97 it will make sense to take both.

Usenet services from Easynews include the following as standard :-