How to unblock Wikipedia anywhere 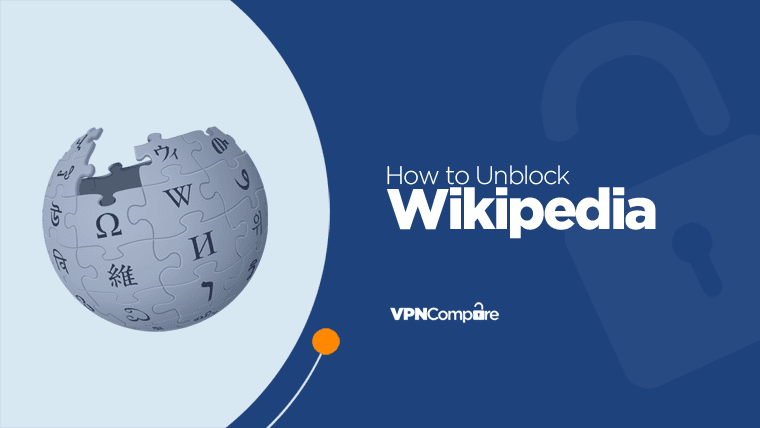 Is Wikipedia blocked where you are?

In this guide we'll be exploring the quick solution that will allow you to access it freely anywhere.

We often think that we know everything thanks to access to modern technology.

Every problem that we run across has a solution, everything we want to do has a tutorial somewhere online, and every question has an answer that can be reached by Google.

And, on top of all that, we have Wikipedia – the free online encyclopedia that has made every other reference feel incomplete.

Wikipedia is great because it is continually getting bigger, filled by passionate volunteers who wish to spread knowledge, although some do question the reliability.

But, what if you lost access to it? This is a problem that entire nations have to deal with.

I'll be showing you how you can keep accessing wherever you are, but more on that later.

Why is Wikipedia blocked?

First, let's examine why the service becomes blocked in the first place.

Wikipedia is a free encyclopedia, and as such, it offers knowledge without cost on nearly any topic.

Because volunteers deliver this knowledge, it is not considered 100% correct. However, it is still edited continuously, with fact-checking and other similar activities that are making it better all the time.

As it is home to the biggest open-source database on the planet, with over 40 million articles in more than 300 languages, it can be a dangerous tool to oppressive governments that wish to restrict access to free information.

With no way to manipulate it, these governments have done the second-best thing – they blocked it entirely. Often it's only one or two offending articles, but instead of restricting access to just those, they block the entire service.

Where is Wikipedia blocked?

While we may like to think that there is maybe one super-oppressive country that has blocked the most significant source of human knowledge on the internet, the reality is that there are quite a few nations that did so.

Wikipedia is blocked in China by the country's so-called “Great Firewall of China,” and the Turkish government blocked it in 2008, again preventing it in 2017 until early 2020, although we expect it to be blocked again in future.

France even partially blocked it, and the UK and some other countries that had it blocked in the past include Iran, Pakistan, Syria, Uzbekistan, Italy, Russia, Saudi Arabia, and Tunisia.

What can I do to unblock it?

There are several ways to access blocked content, but the fastest, most secure, and easiest by far is to use a VPN.

VPN, or Virtual Private Network, is an app that allows you to protect yourself from online dangers and bypass censorship, geo-restrictions, and similar problems.

It does this by combining various security, privacy, and anonymity features, such as encryption, security protocols, server networks, and more.

With it, you can protect your data from being intercepted by any type of online surveillance, and you can make your online actions completely private and partly-anonymous by hiding your location, as well as your internet activity.

Add the fact that all of your browsing data is disguised means you can skip past any blocking of Wikipedia or other services.

Which VPN should I use?

Indeed, there are countless VPN providers out there, and most of them look similar enough that you may think them identical if you don't know what to look for.

In truth, they are all different, with stronger or weaker security and privacy features, larger or smaller server networks, rich with features or only offering the essentials, and more.

This all makes it challenging to pick a good one, which is why we decided to help by testing the leading services and recommending our favourites:

With any of these, you can unblock most censored content (including Wikipedia), and use them privately without anyone knowing.

How to get and use a VPN?

Believe it or not, but picking a VPN is the hardest part.

Once you get that out of the way, all that remains is to set it up and start enjoying the free internet once more

Also, don't worry if you are not an expert when it comes to technology – if you know how to install any app, then you have it all covered.

Connect to a country where Wikipedia is not censored.

And that's all it takes.

With these few steps, you will be able to unblock anything, and it won't cost you more than just a few dollars per month.

How do website blocks work and why can VPN help?

If the government or your ISP (Internet Service Provider) decides that something is “offensive” or inappropriate in some other way, the ISP then blacklists it, preventing all users from access that resource on their network.

Most countries have just a few big internet providers, so it's relatively straightforward for a government to pass an order to restrict access to whatever content they choose.

It is as simple as that, and suddenly, the entire clientele of the internet provider loses access to that specific content.

Meanwhile, the VPN helps by providing you with its own servers located in other countries.

You would have to connect to another country to bypass such censorship. Still, in doing so, you would be assigned an IP address that is not prevented from accessing content such as Wikipedia.

Your connection is sent down a secure “encrypted” tunnel so it's impossible for your internet provider to know what services you're accessing.

Can I get in trouble for using a VPN?

In most countries, you don't have to worry about having legal issues when it comes to using a VPN.

This is not an illegal app, and so as long as you don't commit a crime online, using a VPN itself won't make you interesting to the authorities.

With that said, some countries are not VPN-friendly, primarily China and Russia.

Most countries do not openly ban VPNs as their own agencies need to use them, but these have found a way, especially China, which has prosecuted some of its citizens for using a VPN in the past.

The majority of the population still uses a VPN, but it might be something that you should know.

However, you can easily bypass any type of censorship that may be preventing you from accessing all that knowledge by using a VPN.

All that matters is that you use the right service, as not all of them are as good or as safe as the industry's leading services.

We recommend using ExpressVPN, or one of our tested services in our VPN Comparison Guide. You're free to choose and will then have access to an unrestricted internet.