How to unblock and watch iFollow matches in the UK

If you're a lower-league football fan looking to unblock iFollow matches in the UK then this is the guide for you.

In this guide I'm going to show you how you can bypass any restrictions on iFollow that stop you from watching certain matches.

iFollow is a great service to watch grassroots football. After all, the lower leagues are where some of the best action happens, not disturbed by eye-watering transfer fees and prima donna footballers.

However, if you're in the UK then not all matches are shown on iFollow which can mean you missing out on large numbers of games. Below I'm going to show you how to avoid this and keep up with all the action.

How to unblock and watch iFollow matches in the UK

To unblock iFollow matches in the UK that are restricted from viewing such as ‘3 pm kick-off' games you'll need to get a VPN service.

VPN services are offered by hundreds of companies. Type the term ‘VPN' into Google and you'll be left with a bewildering array of choice leaving you confused.

Not all VPN services are suitable for unblocking iFollow because they're just too slow for video.

My recommended VPN service is NordVPN. They've got a massive 30-day money back guarantee giving you plenty of time to see it working. If you can't get it working then just get a refund – risk free!

As using iFollow in the UK can be a little hit and miss I only recommend signing up for a 1-month at a time package. 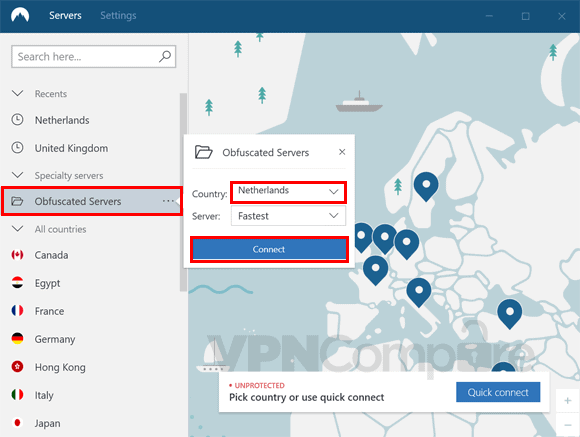 Once the NordVPN app has connected all you need to do is hop over to your iFollow account. Either visit the iFollow page of your football club or launch the app.

You'll now be able to watch any of the matches including ‘3 pm kick-off' matches, matches shown exclusively on Sky Sports or any of the others which are usually blocked.

*You may need to try a few different countries if the initial country you connect to doesn't work.

NordVPN isn't the only VPN provider available, in fact, there are hundreds.

It's important to remember that not all VPN services are created equal so not all will be suitable for unblocking iFollow matches. As a VPN passes your data through another location some are just too slow for video and will result in slow and buffering playback.

It's for this reason I recommend NordVPN because I've tried and tested them.

However, you may want to check out some of these although your mileage may vary when using them:

Simply click on one of the provider's names above to visit their site and sign up. The process is the same as the NordVPN instructions from earlier in this guide.

Why are iFollow matches blocked in the UK

iFollow was previously a service for fans abroad to keep up with their favourite team from the Championship and League One and Two.

For the first time ever starting from the 2018-19 season this has been extended to allow UK viewers to watch live streams of their favourite lower-league teams via the iFollow service. Unfortunately there's one major difference.

While overseas viewers will get access to nearly every match, UK viewers will be restricted from watching any games shown on Sky, any games that fall within the ‘3 pm kick-off' rules which includes all matches kicking off between 2:45 pm and 5:15 pm and any matches that fall on bank holiday or other public holiday days.

Thankfully with a VPN from NordVPN you don't need to miss a single game on iFollow.

Conclusion: How to unblock and watch iFollow

iFollow is quite possibly the best service to watch football from the lower leagues.

International viewers don't have the same issue as they're allowed to watch all games. By using a VPN app you can tap into those games and unblock all the blocked iFollow matches in the UK.

Get yourself a VPN from NordVPN by clicking the button below and sign up for their service.

Download their app and install it then connect to a country outside the UK such as the Netherlands -> Russia.

You'll now be able to watch all the matches that are usually blocked on iFollow in the UK such as ‘3 pm kick-off' matches, Sky Sports exclusive matches, public holiday matches and more.

Looking for similar articles, try these: