Home » Guides » How to unblock TextNow and use it from anywhere

How to unblock TextNow and use it from anywhere 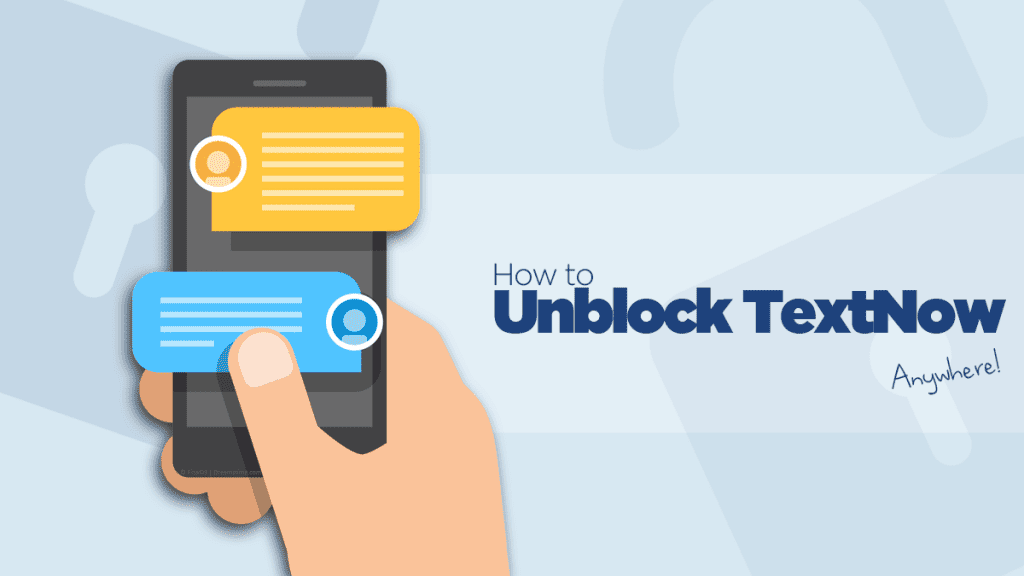 You may have heard about TextNow, a very popular texting service that allows you to call or text any number in the US, Canada or other locations.

Unfortunately, the app only works in some areas, so if you try to use it outside of the allowed countries or in countries where it's blocked, it will not work for you.

Thankfully, it doesn't need to be like that and there's a super-simple solution.

In this guide I'll be showing you that solution, all it takes is a ‘VPN app' which I'll explain more about further below.

So if you are an American or a Canadian travelling abroad, and you wish to use it to stay in touch with those back home or you want to contact someone there, then there are still ways you can do that.

Despite the geo-restriction, we have a way for you to unblock it anywhere in the world, and if you keep scrolling, I'll explain how.

Before we do that, however, let's make sure that we are all on the same page by covering the basics, such as – What is TextNow?

What you need to know is that this is a VoIP (Voice over Internet Protocol) app, which means that it uses the internet for communication.

It gives you a real phone number that you can use on a smartphone, tablet, laptop, or even desktop, as long as you have an internet connection.

In other words, the internet, and your IP address, especially, are crucial for it to work, but that's also what we will use to unblock it in any part of the world.

What do you need to unblock TextNow?

To unblock the app, you need to use a ‘VPN‘.

But, what is a VPN I hear you ask?

VPNs are specialised apps that allow you to protect yourself online.

They were initially created to increase users' privacy and security. However, with geo-restrictions and online censorship growing over the years, one of their significant uses became bypassing such problems.

They use a mix of various privacy and security features to do this, which is what makes them the ultimate privacy tools.

Best of all, they use a networks of computers known as ‘servers' to let you change your online location and appear to be located elsewhere, which is why they are useful for TextNow.

What's the best VPN for TextNow?

The first thing you should know is that there are hundreds of VPN services out there these days.

The second thing to note is that they all vary in quality from poor to excellent.

My favourite right now and the best for use with TextNow is ExpressVPN.

This is a great VPN for multiple uses, VoIP included.

Its high speeds allow you to talk to others via TextNow without being interrupted, and the fact that it has plenty of servers in the US and Canada means that you can easily connect to these locations from anywhere in the world.

Alternatively, you can use CyberGhost or NordVPN, both of which are also very competent and respected, with low prices, high-security standards, and many servers around the world.

You're free to pick and then find out how to use it below.

So, if you are interested in accessing TextNow from anywhere via a VPN, here is what you need to do.

You will have to enter some information, such as your email and payment details. You can also choose a payment plan.

After signing up, you will be presented with links for downloading the VPN app.

You can download the app from the website, or you can go to the app store if you prefer to use TextNow on a mobile device.

The next step is to install the app, open it, and log in with your account details that you created in Step 1.

After that, you need to locate a list of servers and connect to any server in the US, Canada or any other country where TextNow works.

And, that's pretty much it. You will now be able to use TextNow completely for free.

The app is very user-friendly, so you should have no trouble figuring it out.

Can I use TextNow without a VPN?

Of course, but only if it is not blocked in the country you live in, or are visiting.

Unfortunately, most countries in the world do not have access to it, which is why a VPN will most likely be crucial for you to use the app.

Keep in mind that you might have to use a VPN even if you are in the US or Canada if you connect to the internet over networks provided by schools or workplaces. They often limit access to such apps to increase workers' or students productivity.

TextNow is one of those very efficient and useful apps for chatting and talking through the use of the internet.

It is very popular in some regions of the world, where it is available.

Unfortunately, if you are not located in one such region, but you wish to talk to someone who is, you'll find you're blocked.

No need to worry, though.

By using ExpressVPN's simple app, you can bypass these restrictions and make use of TextNow wherever you are.