How to unblock and access Genius Kitchen in your country 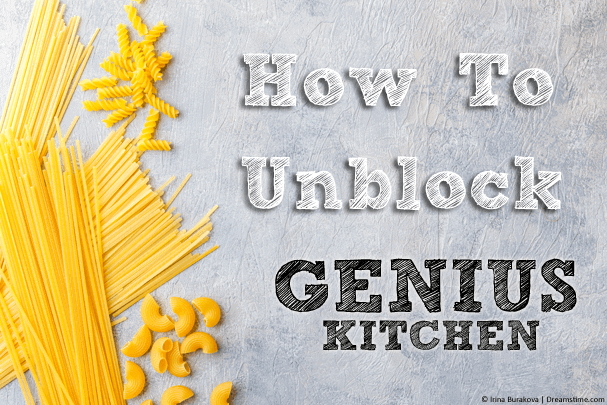 If you're looking for a quick and easy way to unblock and access Genius Kitchen then this is the guide you need. In this guide I'm going to show you how you can access the Genius Kitchen website with minimal fuss and effort.

If you're a cooking fan then Genius Kitchen is without a doubt one of the best online cooking sites with plenty of guides, help and ideas to help spruce up your culinary creations.

It's part of the bigger Food Network organisation which includes various websites and TV channels in more than just one country.

Genius Kitchen is a great website for cooking ideas, recipes and more but imagine my surprise when I tried to visit to grab a recipe for Weeping Tiger Thai Marinated Beef. Rather than get the recipe I was expecting I was hit with a message like this one:

Now I'm not 100% sure why Genius Kitchen is blocked in the UK but it also appears to be blocked across the EU too. My guess is they've blocked it because of recent EU GDPR rules regarding privacy-policy's.

I could be wrong, however, there are other sites from Food Network that work entirely fine, but perhaps they didn't want to adhere to such regulations with the Genius Kitchen site so decided simply to block it to all users from the EU, or indeed anyone outside the United States.

A simple cooking website should not be blocked from access for certain countries so I set about to find a way to access Genius Kitchen and finally get my Weeping Tiger Thai Marinated Beef recipe.

Thankfully there's an app called a VPN that allows you to change your online location to the United States which results in the Genius Kitchen website being ‘unblocked'. Find out how below.

To unblock the Genius Kitchen website in the UK or in your country you'll need to get yourself a VPN app. A VPN allows you to disguise your real location and make it look like you're somewhere else.

Hundreds of companies offer VPN services so it can be difficult to know which to choose. I've whittled the choices down to my 3 favourites, which are:

Simply select one of the three providers above and sign up for their service. I've been using ExpressVPN and below you can see the simple steps to unblocking Kitchen Genius anywhere.

Now you're connected to the VPN any websites you visit think you're in the United States.

When you visit Genius Kitchen rather than be blocked because you're not in the United States, the website thinks you are and so lets you access the entire site and all its content.

So by using a VPN I was able to get my Weeping Tiger Thai Marinated Beef recipe and while I haven't yet made it, it is on my to-do list for the future.

If you're looking for new cooking ideas then Genius Kitchen is a great site and now you can access it in your country using a VPN you'll be able to whip up some new and interesting dishes.

How does a VPN work and is it legal?

VPN services are completely legal in 99% of countries across the world. Apart from some repressive regimes like North Korea, you're free to use VPN apps without worry.

A VPN works by disguising your location and making it appear you're somewhere else. It does this by passing your data and request through a middle-man which is the VPN service.

When you try to visit the Genius Kitchen website normally your request goes from you via a route to Genius Kitchen. It's tagged with your location and so it's simple for them to block you.

When you visit using a VPN your request goes from you to the VPN company's large computer (known as a Server) located somewhere else. In this case located in the United States. It is then tagged with the VPN company's server location and sent on to Genius Kitchen.

Genius Kitchen only sees a request from someone in the United States (which is the VPN company's computer) and so send the site back. The VPN company's server then passes this on to you.

This is all done quickly through the VPN app, you won't even know it's happening. To you, it's just like browsing the internet as normal.

To unblock and access Genius Kitchen in your country you'll need to get yourself a VPN app.

A VPN allows you to disguise your real location so instead of being blocked you're able to access Genius Kitchen.

I recommend using ExpressVPN which you can get by clicking the button below. Once you've signed up download their app and connect to the United States.

All you need to do then is visit the Genius Kitchen website and enjoy the site.