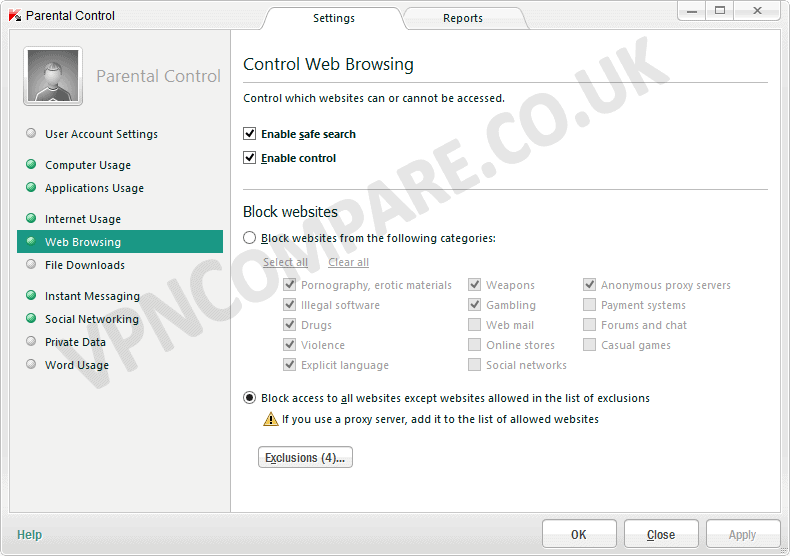 Open Rights Group has given examples of such filtering including pornography, violent material, terrorist material, alcohol and even web forums! (Source)

This is a rather large range of supposed filters and one has to wonder what the purpose of these filters may be. Of course the main given reason is to protect the innocence of children in the UK and while this is an admirable goal you have to wonder if this is the actual reason or is it a more Orwellian ideal in which it gives the government further power to snoop upon its citizens as recently published in the Edward Snowdown revelations.

The first question to ask is, while there is a huge range of security software out there already, many of which include parental filters, why do we need filtering to be done on an at source level? Any responsible parent should already have filtering software in place AND be allowing internet access only in rooms visible to themselves. Parents should be able to govern what is acceptable and age appropriate for their own children and as such be installing filtering software such as Kaspersky Internet Security 2013. (picture right)

So if the “innocence of children” is really at stake then perhaps the education of parents should be at the forefront. The internet has grown rapidly over the past 10 years and unfortunately the technically ability of people, especially parents has not kept pace. Although that said, we are now at a turning point where those born in to an age that has never not known the internet, these first time and new parents should be well versed on the internet and its many evils.

I for one do not wish to have my internet content filtered based on what the government claim is a valid reason, I have to question what further powers this may give and why they are continually eroding the very foundations of what the internet was built on. I am lucky enough to have used the internet for nearly 20 years and as such have seen the freedoms removed and restrictions appear over more recent years.

So my suggestion to citizens of the United Kingdom and other countries with similar filtering systems in place. Take a look at our VPN comparison chart, hunt out the best VPN provider for yourself and make use of a VPN outside of your country so your internet activity can no longer be filtered. Making use of a Virtual Private Network is one of the only ways to ensure that your internet content can not be filtered.

I may not wish to break the law, but if I want to visit The Pirate Bay or one of the many blocked internet sites in the UK then I should be free to do so. If I break the law at one of those sites then I expect to be punished for it, but by just visiting I am breaking no laws, so why should I be restricted in visiting in the first place?

The Open Rights Group has started a petition to block the default internet filter, please take the time to sign it, https://www.openrightsgroup.org/campaigns/cameron-stop-sleepwalking

After that, take a look at a decent VPN and free yourself of unnecessary filtering. Take a look at our earlier article to find out The Top Five Reasons To Use A VPN.