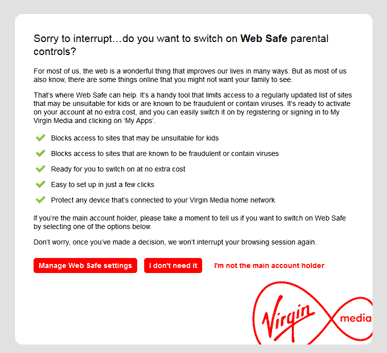 In 2013 the UK government announced a new requirement for Internet Service Providers (ISPs) to ask each and every subscriber if they wanted to enable “adult filters”, a basic way of asking if you want to access pornographic material or not. 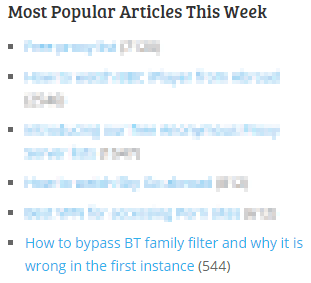 On the surface a very worthwhile cause with the aim to protect children from the murky world of the internet. In reality a poorly thought out and even more poorly implemented idea. One of the first ISPs to implement this was BT which I wrote about at the end of 2013, an article that has actually gone on to consistently be one of the top read on our site throughout the whole of 2014, just going to show what interest and concern in the UK there is surrounding this topic.

David Cameron the UK prime minister imposed a deadline of 2014 when all customers should of answered the question of if they want access to adult material or not, it would appear the majority of users have simply ignored the requests of past and so the ISPs in the UK have upped the ante.

Reports out yesterday from news site Arstechnica show that three of the major ISPs in the UK, BT, Sky and Virgin Media are using underhand tactics to hijack users browsing sessions and force them to make a decision about adult web filtering. While it is impossible for the ISPs to do this via an encrypted session, either by visiting a HTTPS site such as your bank or while using a Virtual Private Network (VPN) to surf the internet, they can do so when visiting none encrypted websites such as news or informational sites.

The worst offender is BT who are fully blocking users browser sessions unless they make a decision, so if you wish to give no answer or just ignore it, you can’t, unless you make use of a service such as a VPN to obfuscate your internet usage. Without one you’ll be stuck on an injected page that requires your answer. While you are not required to activate the filter, you are actively required to choose not to. Groups have called this an invasion of privacy as ISPs will have access to a list of subscribers who for all intents and purposes are classed as wanting to access “adult material” when this very well may not be the case.

Open Rights Group who hosted ORGCon14 in November 2014 and campaign for online rights have been a big opponent against the adult filters. Their site Blocked.org.uk shows that many non-adult related sites or sexual information sites are unfairly blocked. In response to the latest debacle Open Rights Group have stated that customers would be encouraged to trust web sessions that have been hijacked in this manner. This is poor security practise indeed.

Sky and Virgin Media have stated that their implementation, which although hijacks the browser session can be simply ignored. All new ISP customers have faced this question when signing up for an internet service but this is the first major push forward to require current subscribers to also answer a question which David Cameron claimed would be an “unavoidable decision”.

Many users will be quite happy to either opt in or opt out, but for users without families or children, having no opinion on the topic is also an option, the heavy handed tactics are in essence forcing people to agree to make a choice. Carriers of data such as Internet Service Providers are supposed to be impartial towards the types of data that travels over the network, what you use that network for is your own business and anything illegal you do should be a matter for law enforcement agencies. The adult filter is the first step in the direction of further restrictions and questions that require answers, who is to say where it will end?

For now the only options for UK users who wish to avoid answering the question, especially on the BT service is to sign up for a VPN and encrypt all of your network communications which will remove the ability for the ISP to hijack your browsing sessions. Users on the other networks should in theory be able to ignore the request, for now.