Is Twitch safe for kids? 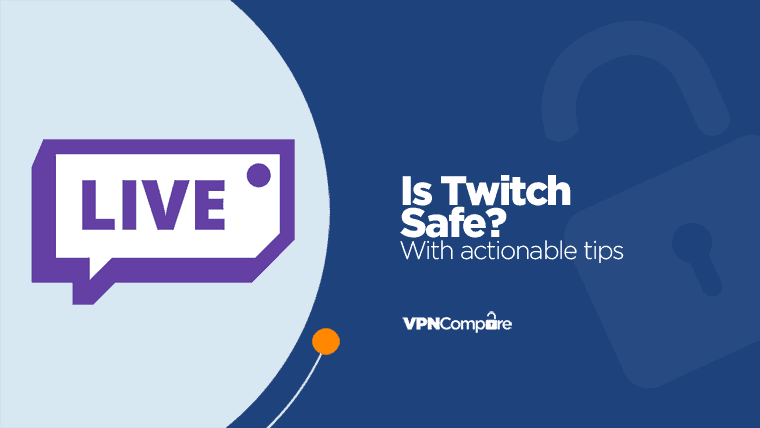 While you might assume that the world of computer gaming is relatively innocent and populated by people more interested in exploring artificial worlds or scoring pixilated goals, the reality can be a lot more sinister.

In this guide, we will tell you everything you need to know about Twitch, the potential risks it can pose, and the steps you can take to keep your kids safe online when using Twitch.

Twitch is a live streaming platform on which video game fans can stream their online video game playing live to fans worldwide.

Often, they will provide a commentary over the top of the gameplay and there are also forums where fans can share their thoughts on what is happening.

Anyone can create a free account and start streaming at any time.

In truth, Twitch can be about anything, from video gaming to live music, e-sports competitions, talk shows, live gameplay, live commentary, nerd culture, unboxing videos, and all kinds of other streamer and user activities.

Twitch is one of the many online businesses that has flourished as a result of the global COVID-19 lockdowns that have left millions of young people around the world trapped in their homes and desperately seeking out some form of entertainment.

Live streaming was one of the first options they turned to.

It was founded in 2011 but the fact that it has now been bought out by Amazon tells you everything you need to know about Twitch's popularity.

Twitch now averages more than 30 million daily viewers and in 2020, more than 1 trillion minutes of gameplay was watched.

That number is growing all the time.

What are the risks of Twitch?

Before we start answering the question of is Twitch safe for kids, it should be stressed early on that the vast majority of content on this streaming platform is perfectly innocent.

There is no real reason why you should stop your kids from enjoying live streaming.

But there are still a few risks around young people using Twitch which all parents should be aware of:

Twitch allows users to enjoy live feeds of video gaming and other activities, which is one of the big attractions to its users.

But there is a downside to this too.

Adult and sexually explicit language are commonplace in Twitch's chat function, and sometimes this can be extremely strong and sexual in nature depending on the stream being viewed, which doesn't exactly make Twitch safe for consumption.

Users can even contact each other directly through private chats, so while Twitch monitors what is going on on the platform and maintains internet safety, these private chats are not being protected.

But it gets worse. It is also possible to use Twitch to stream other content too and this can also include violent and sexual content.

Twitch requires users to follow strict rules meant to make Twitch safer, but it is not perfect, and all kinds of content can slip through.

Perhaps the most infamous example of this is from 2019 when a 35 minute live Twitch video was used to stream a terrorist attack on a Synagogue in the German city of Halle.

Around 2,200 people are thought to have watched the footage in which 2 people were killed.

Twitch apologized and insisted it has “a zero-tolerance policy against hateful conduct, and any act of violence is taken extremely seriously.”

However, it took well over half an hour to remove the video from its platform.

A popular feature of Twitch is the chat feature which runs alongside streams and allows viewers to share their thoughts.

This feature can be open to all users and that means your kids will have no idea who they are engaging with while watching their favorite streamers. 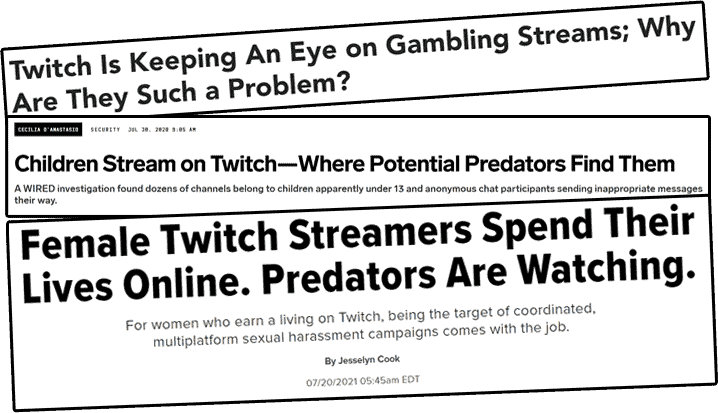 Twitch also offers a direct messages feature which is rather sinisterly referred to as “Whispers”.

This feature means your kid could receive unsolicited messages from other users and this opens up a clear risk of them being exposed to possible predators and potentially groomed.

As well as predators, the social side of Twitch can also expose users to cyberbullying, harassment, hate speech, and abuse.

This has been a particular problem for female users of Twitch with many reporting instances of sexual harassment, especially when it comes to bigger channels and more popular streams. However, other channels are not safe from it either.

The same is true for other viewers, not just the streamers themselves.

One infamous example involved the Twitch user Samantha Wong. Her reports of sexual harassment went right to the company CEO, but still, no action was taken.

To their credit, Twitch has now taken steps to try and deal with this issue, including removing people permanently from the platform.

But there is no denying that the issue still exists and there is little to stop excluded users from starting a new account.

The Twitch gaming community is built on a platform of subscriptions and donations and quite a few Twitch streamers make a handsome income just from streaming their gameplay.

But users can end up spending large sums in subscribing, which requires a monthly fee, to follow and view streams.

How to keep your kids safe on Twitch

With these risks in mind, you might be tempted to try and keep your kids off Twitch altogether.

That is likely to lead to huge arguments and some illicit Twitch use. A far better approach is to engage with your kids about their Twitch use and ensure they are using the platform safely.

Here are a few of the keys ways you can do that:

While Twitch doesn't offer parental controls as such, there are a number of settings that you can adjust to help keep younger users safe on the platform.

Examples of the steps you can take include: 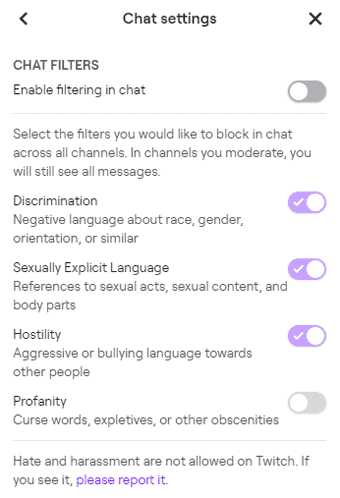 But parents beware. A lot of these functions are easy to undo if your child is so inclined, so it is worth checking their settings intermittently to make sure they are still on.

Make sure that when your child sets up their Twitch account, they input an age that is lower than 18 years old.

This will help to ensure that most adult and inappropriate or harmful content is flagged. Users under 18 will get an inappropriate content warning if they try to access channels that are unsuitable for them.

This allows for informed choices about the type of content they are likely to be watching on Twitch. Seek out similar settings on other platforms.

They are there for parental supervision, so you should make sure to use all the means at your disposal.

3. Don't give kids your bank details

You might choose to allow your kids a small allowance to use on Twitch if they so wish.

You might even let them spend their own money on the site, supporting their favorite streamers, who are likely to be young gamers themselves, just trying to get by and create their own content.

But whatever you do, don't connect their Twitch account to your bank account. This is asking for trouble.

Some kids won't know how much they are spending. With easy access to your money, others won't care.

Either way, if you want to avoid the risk of running up significant debts through Twitch, just make sure you aren't even open to the possibility.

4. Use Twitch in a communal place

Make sure your kids are using Twitch in a communal place where you can keep an eye on them and make sure they aren't accessing inappropriate content or talking to people they shouldn't be.

It is a good idea to ensure that your kids are on a computer in the living space whenever they go online but it is particularly important with sites like Twitch.

This doesn't mean you have to keep watching over their shoulder all the time or introduce screen time limits. They won't like that any more than you do. But it means you can check in at your leisure and ensure they are safe.

5. Engage with your kids about Twitch

Be sure to communicate with your kids about Twitch. Talk to them about what they do on the site, why they like it, and what makes it fun for them.

Show an interest and perhaps even join them for a few sessions, and check out a few other gamers together.

This way, if something bad does happen on the site, they are far more likely to tell you about it and put you in a position to be able to sort it out.

Much of the above advice is aimed at younger users who are on Twitch to stream other video gamers and engage with fellow online gaming fans.

But what about if your kids want to stream their own gameplay on the site? In all honesty, much of the advice will remain the same.

Be sure to use the settings available to limit the exposure your kid has to potential predators, make sure they are not in a position to spend masses of your money and keep an eye on what they are doing online.

Follow Twitch's community guidelines, set chat filters and make sure that the stream is friendly for younger audiences.

Burnout can also be an issue. Only recently streamer Sooshi highlighted the issue of long hours and social anxiety as a result of streaming on Twitch for too long.

Block discrimination of any kind, modify your own channel and do whatever you can to make sure that the live stream or live streams on your kids' channel(s) are appropriate for younger kids.

This should be your primary focus to ensure that your channel is kid-appropriate for your kids and others.

Streamers might have an increased risk of facing abuse and harassment on the site because they are putting their own game-playing out there for others to view and comment on.

You therefore might also want to speak with them about how to handle negative comments and what responses (if any) they should make.

So, is Twitch safe for kids?

Generally speaking, Twitch is a safe platform, but there is no denying that there are risks out there for younger Twitch users. The main ones include:

But there are ways to mitigate these risks and ensure that you and your kids can feel comfortable when they are on this site, as well as other live streaming platforms.

Use the settings to minimize adult content, create an under-18 account, no bank details, keep Twitch use in a communal area and engage with your kids over their Twitch habit.

With these precautions, Twitch can be a fulfilling and safe pastime for them and you.