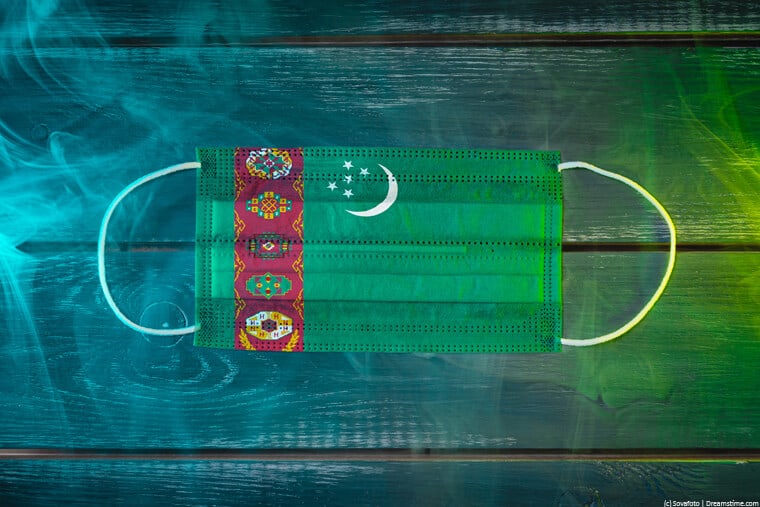 It might seem remarkable to us here in the UK, where the coronavirus pandemic has rarely been out of the news over the past year, but in some countries, governments are doing their utmost to hide the fact that COVID-19 is ravaging the population.

You might have read some stuff about Communist China covering both the scale of their outbreak and the origins of the pandemic, but they are far from the only totalitarian regime that has been hiding the truth.

Turkmenistan is officially a miraculous state since the government data records that there have been zero cases of COVID-19 in the country so far.

As with China, the official data has no bearing on reality but the government is determined to pretend all is well. The media in Turkmenistan is all state-controlled and rarely makes any mention of the pandemic.

There are certain health-related restrictions in place across the country but the authorities are far more concerned with preventing people from knowing the truth than protecting them from the virus.

Radio Free Europe is just one western media outlet that has sources in Turkmenistan updating them about the situation in local hospitals. And they have recently reported an increasing crackdown against hospital officials and young people across the country.

They report that their sources have seen a significant increase in authorities demanding to search people's phones, both in hospitals and certain cities.

According to their source, health workers in the eastern city of Turkmenabad have had their phones searched in an attempt to find out who from the city has been talking to western media about the COVID-19 outbreak there.

These sources have reported a rising number of COVID-19 cases, growing deaths, and a health system being stretched to breaking point.

This doesn’t fit with the regime's narrative and they are far more concerned with keeping the population on-message than tackling the public health crisis.

Meanwhile, in the southern city of Mary, the number of young people being stopped on the streets and having their phone searched for VPN apps has also increased significantly.

Suspects are being detained and if found to have a VPN, they can face as much as 15 days in jail.

This is not the first time we have reported on a crackdown on VPNs in Turkmenistan. Back in October 2019, the authorities again attempted to ban the use of VPNs after President Gurbanguly Berdimuhamedov signed into force a new “Law on Cybersecurity”.

This resulted in the Google Play store being blocked across the country to try and stop VPN apps from being downloaded. Inevitably, it also led to a big spike in downloads of VPN apps across Turkmenistan.

Turkmenistan's attempt to ban VPNs failed. They lack the resources and technical capabilities to put such a ban in place and even if they didn't, VPN providers would find a way.

So, instead, they have taken to searching people's phones, echoing recent events in Kashmir and punishing them accordingly.

But with a collapsing economy, a growing COVID-19 crisis, and a growing protest movement across the country, this clampdown is getting tougher and tougher.

VPN's still offer the best solution to allow the people of Turkmenistan to access the internet without restrictions and to share the truth about what is happening in their country, with both the COVID-19 pandemic and other issues, with the world. But they should be aware of the possible consequences if they are caught.

If you do choose to use a VPN in Turkmenistan, you can find our list of recommended best VPNs for Turkmenistan here.

If you do download a VPN, it is a good idea to carry another phone with you to show to the authorities if you are stopped. This is a strategy used in other authoritarian dictatorships like China.

There is some good news coming out of Turkmenistan. Despite officially having no COVID-19 cases, there is now a vaccine programme being rolled out.

The bad news is that they are using the Russian Sputnik V vaccine and there has been no official programme of vaccinations rolled out yet.

That suggests that things are going to get worse before they get better. And if the people of Turkmenistan want to share the truth about their situation with the world, they need to take a risk and use a VPN to do it.