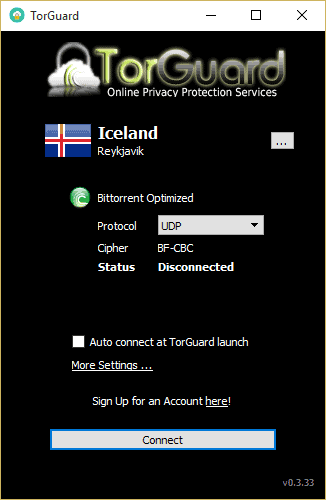 I last looked at the TorGuard service back at the start of 2014. As things move quickly in the VPN industry and companies expand to include extra features it was about time I cast my eye over them again to see how or if they’ve progressed.

I previously found the service to be fast and robust so if you’re wondering if they’ve managed to keep that up and improve then keep reading in this TorGuard Review for 2015.

TorGuard although being a VPN provider also offer a few other services such as an Anonymous Proxy, Private Email and a more comprehensive Privacy Bundle. These features may be of interest to some users but are outside the scope of this review so I will be concentrating solely on their VPN Pro Service.

The VPN Pro Service contains the full feature set from TorGuard and sign-up options are available based on the period of time you wish to take the service. The following service lengths and prices are available.

The lower length packages work out more expensive with bigger savings had the longer you subscribe. However, these savings stop after the 6-Month package and the monthly prices then work out at the cheapest possible across the 6, 12 and 24 month accounts.

The same goes with Viscosity licenses, you get 1 license with your account. You’re able to add these at $1 extra each if you want to make use of the VPN client Viscosity although this isn’t necessary as TorGuard provide their own custom client too.

Like other providers there have been many changes at TorGuard since I last reviewed them which shows they’re ever expanding and keeping pace with other services.

One difference with the TorGuard service over most other providers is the range of VPN protocols on offer. While they do offer the standard PPTP, L2TP and OpenVPN VPN protocols they also include the addition of SSTP and IKEv2 plus what they call “StealthVPN”.

TorGuard has custom software for Windows, Mac, Android, iOS and Ubuntu. There are also extensive set-up guides and configuration files available for other systems.

The custom software for Windows and Mac has been completely overhauled since my last review to include a better looking and more user-friendly interface with extended features that include:

As well as the above the usual plethora of auto-connect, launch on boot, start minimised etc. options are available.

If you love Viscosity, TorGuard has you covered!

TorGuard also allows you the opportunity to make use of the Viscosity VPN software which is a well loved and more advanced VPN connection software with expandable options via the scripting feature. I’m not personally a massive fan of Viscosity but it does have a large following and the standard TorGuard service price comes with one license for the software with the option of buying additional licenses for $1 extra each per month.

Currently only select servers allow using higher encryption but I’ve been informed that within the next week they’re releasing an updated client that allows you to select your encryption type. By the time you read this review, it’s likely that is already in place.

For the time being though it’s possible to get configuration files with higher encryption to use in software such as Viscosity or OpenVPN directly which should tide you over until the impending updated custom software release.

The Android app has also been updated and now has a similar layout to the desktop client making connection on all devices a seamless affair.

When I last looked at TorGuard they had 30 different countries available to connect to. This has expanded to over 43 countries available and with 1250+ servers across their network the choice of available connection points has continued to grow over the past few years.

TorGuard boast servers in all major continents with the following covered:

Each continent has at least a server in one country but in most cases many more countries are available.

The size of the network now makes TorGuard one of the bigger players on the market and this makes the service suitable for travellers or those living in most continents. If your own country isn’t covered then you can be pretty sure there is a close neighbour who does have a server available.

Many VPN providers have started to move to offering their own private DNS servers. TorGuard does not via its custom software and even with the “Prevent DNS Leak” option selected they use public DNS services such as Google and OpenDNS. While good that they ensure your local ISP DNS servers are not used it would be nice to see them offer a private DNS service run by themselves.

As with many other VPN services the UK’s BBC iPlayer has started to be blocked. Unfortunately, TorGuard is one such provider and so if you’re planning on watching BBC iPlayer while connected to their service it won’t work. It does however work with the other UK streaming services such as ITV Player, Sky Go and more. It is also suitable for watching blocked content from other countries like the US and Australia.

The speeds from TorGuard last time I tested their service back in early 2014 were somewhat hit and miss. While local servers such as the UK hit nearly my max internet speed others like Sweden were disappointingly slow.

The results from TorGuard in my latest speed test are more consistent across the board although I’m a little bit disappointed with the maximum speeds achieved. While the speeds across the board will be suitable for many internet connections worldwide those that have connections at the higher end of the scale won’t be able to make use of them with the TorGuard service.

While speeds may not be at the top end of the scale their reliability and consistency when browsing the internet doing regular tasks was top notch and only those that do heavy downloading or require top speeds will notice the lack of top tier speed.

As part of our review process all testing was carried out from within the UK and so any speeds achieved by yourself to the tested servers may be greater or lesser. A 10 GB test file was downloaded using a Download Manager while using the TorGuard custom software. The UDP protocol was used and the standard encryption at the time of BF-CBC via OpenVPN.

My connection speed without VPN at the time of testing was 191.83 Mbps.

The servers tested in order were as follows.

TorGuard offers a range of encryption options, especially via OpenVPN.

In the meantime it is possible to download configuration files to make use of AES with third party clients such as OpenVPN GUI and Viscosity.

TorGuard uses a 2048 bit RSA key for authentication that is the same that was available back at the start of 2014 when I first reviewed their service.

A unique option of Stealth mode is available on the service that allows users to connect to an OpenVPN server through an encrypted Socks 5 proxy tunnel. This adds a second AES-256-CFB layer of encryption to the session. This mode is useful and popular with Chinese users who look to avoid the great firewall of China’s deep packet inspection.

The policies are generally standard regarding use of the service and don’t detail too much about their ethos. However, their Privacy Policy does state that they do not log or store any traffic use from their VPN or Proxy networks. While it doesn’t elaborate then we can only assume this includes connection logs and data transfer etc.

As would be expected TorGuard do collect personal information when signing up to aid with the billing process and like all companies this will be stored for billing reasons.

One of the best features of TorGuard that isn’t available from all providers is they offer 24 hours per day, 7 days per week live support. This means you can get almost all questions answered without the need to wait for a response from a support ticket.

I made use of the live support on numerous occasions and wasn’t left waiting more than a few minutes each time. Strangely I got “Martin” on every occasion and wonder if he works 24 hours per day every day of the week!

Joking aside, live support was helpful and knowledgeable and it is a real asset to the service especially if you’re a beginner who may get stuck.

TorGuard does also have a ticket support system so if you prefer to contact them that way then the option is always there.

TorGuard is a large and popular VPN provider. Their prices are certainly competitive with most other providers, especially when taking service lengths of 6 months or longer. Working out at just under US$5 per month they do fall into the cheaper bracket.

TorGuard excel at the range of VPN protocols on offer and you would be hard pressed to find another provider that offers the full and extensive range that can be found here. While OpenVPN is recommended and one of the most popular VPN protocols if you have a need to use others such as SSTP or IKEv2 then you’re certainly covered.

TorGuard support all other major systems such as Windows, Mac, Android, and iOS and surprisingly they even have software for Ubuntu. Their newly redesigned software since my last review is easy to use and has some of the more advanced options for VPN protection built in saving you from the likes of the WebRTC issue and others such as DNS leaks.

The mobile solution for Android is a seamless transition from the desktop client and layout and design are similar making it easy for all experience levels to make use of. 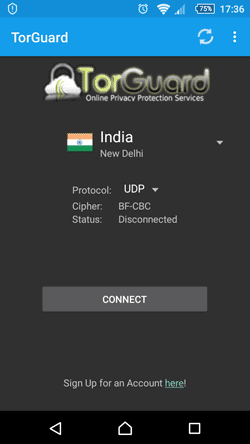 TorGuard offers a massive 43 country availability which makes their service not only good for tourists and travellers but also suitable for most users in a range of countries. Every major continent is covered and if there isn’t a server in your actual country then there is likely to be one close by.

Unfortunately the speed of the service wasn’t as high as I would have hoped. While it is perfect for everyday browsing and watching videos, the top tier speeds just weren’t available. If you do everyday tasks then the reliability of the service and smoothness of connection will be ideal for you but if you have an extremely fast internet connection then it’s unlikely you’ll be able to use that to its full potential for downloading at maximum speeds.

Overall TorGuard is an all round good service and will be suitable for a multitude of needs from protecting your privacy on desktop or mobile to accessing content that is geo-restricted. If the speeds available were a little higher then scores would have been much higher. Saying that if you can cope with average speeds then I wouldn’t hesitate in recommending TorGuard as a great choice for a VPN provider.