Tor vs. VPN What’s the difference

Tor (The Onion Router) and a VPN (Virtual Private Network) are the best options for the Internet users who want to be anonymous while using the Web and be secure. Both of them can protect you against unwanted trackers, and your Internet activity remains anonymous. Both of them also give you the benefit to overcome geo-restricted websites so you can gain access to any blocked or restricted website if you make use of one of these services.

These useful services are very similar in terms of their function, but is there a difference between them? In order to understand the real difference, it is essential to know how each service works and what they offer to their clients. Today, we will have a detailed look at both services and what kind of benefits they offer.

Tor vs. VPN: How Tor Works?

The best thing about Tor is that the service is free to use. Tor, in other words “The Onion Router” hides your IP address and makes your connection appear anonymous. If you are using it, your Internet activity is almost impossible to track so you can continue your activity safely.

Tor relies pretty much on thousands of volunteer servers throughout the world. Your data is encrypted when it enters the Tor network. When the traffic passes down the relays, the encryption process continues for multiple times until it reaches the last computer in the Tor network aka “the exit node”. 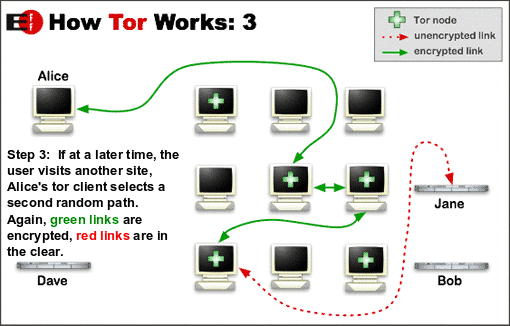 One other thing that is nice about Tor is that it distributes the transactions over several places so your location cannot be identified. It is almost like changing your path if somebody is following you, but you go back to your destination after you guarantee that nobody is following you. So it is ideal to conceal your IP address and you will be completely anonymous to the websites that you visit.

Tor has a dynamic infrastructure, in other words, if there are more volunteers, the network security of Tor becomes stronger. It is a really common tool for journalists and people in countries where freedom of speech is not allowed. People around the world also use it to connect to blocked websites.

Tor vs. VPN: How VPN Works?

A VPN service is similar to Tor. It tunnels your IP address and offers you full encryption. A VPN works rather differently in the sense that it acts as a proxy and VPN providers have their own servers. So whenever you connect to a VPN server, another website cannot see your IP address but that of the VPN server.

Since your VPN server is visible and nothing else, your information cannot be tracked, including identity stealers who cannot access your fully encrypted data.

Now that we know the basics of both services, it is time to move on and talk about their advantages and disadvantages.

Advantages and Disadvantages of Using Tor

For all the reasons listed above, Tor users are recommended to be careful with the data they send out and use secure websites.

Advantages and Disadvantages of Using VPN

There is only a single disadvantage about VPNs, which is the money that you pay. However, usually you end up paying $40-100 dollars per year and VPN services offer affordable pricing options. Considering the service you get, a VPN is worth the money you pay. Some of the best VPN providers such as VyprVPN and IPVanish offer yearly accounts for under $100 with plenty more available in the VPN Comparison Guide.

In conclusion, we see that having a VPN has a lot more benefits than using Tor. Tor is surely a good service with its disadvantages but if you want ultimate security and speed, a VPN is a better fit for you. We recommend you to have a look at the VPN services that are compared on our website and go with the best choice for you! As you know: “safety first!”