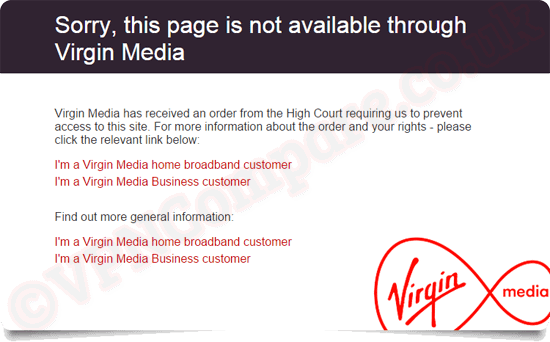 In recent years the requirement via court order for the largest ISPs in the UK to block sites has been growing steadily. Now that the precedent has been set for sites to be blocked in the UK, it seems ever easier for industries such as the movie and music industries to request court orders to block sites that they claim infringe copyright.

While copyright is a legitimate fact of life, the way in which sites are blocked leaves me a little concerned about the direction the UK internet is heading. A site may certainly infringe on copyright, but that does not necessarily mean that if I visit it that I must infringe copyright laws or even break any laws, the simple act of visiting a website as long as no copyrighted material is in view on the main page does not make me a criminal, nor does it mean that I must be downloading copyrighted material.

I see it as my right to visit any website I choose, if there is copyrighted or illegal material on the very first page then fine, I can leave, it is only if my intention is to infringe on a companies copyright should I then be guilt of a crime. What if I want to research the site, or take a screenshot of the front page, perhaps I am a university student writing about sites infringing copyright, how can I visit it if the courts of the UK feel it suitable to completely block sites that “infringe on copyright”

The internet is rather vast and this silly cat and mouse game chasing websites to be blocked is just that, silly. A domain can pop up within seconds, be hosted anywhere in the world and be spread quickly and easily, if it gets blocked, a new domain appears, the situation in the UK is ridiculous because the court order blocking of sites will never work, the list will grow ever bigger but it will solve nothing. The reasons behind this is as I stated, new domains can be registered quickly, easily and cheaply and secondly, if you want to access a website that is blocked in the UK then just using a simple tool such as a Virtual Private Network will allow you to access any blocked sites.

This week, the website Torrentfreak, a site that reports on torrent orientated news reported that a site that was originally blocked via a court order in the UK has now been unblocked after apparently going legitimate and removing all copyrighted material. This is the first such site to be removed from the UK block list and likely the first blocked site that has moved from what could be classed a pirate business model, to one that is now seen as legitimate.

While this has not been well received to the previous user base of the site, it will no doubt please the music industry.

Although one site was unblocked this month for changing their business model, another 53 websites were blocked in the UK over October and November 2014 bringing the grand total to a little over 100 sites blocked.

It has now become commonplace for websites that infringe copyright to appear on the blocked list, however in a more interesting development it appears the website blocking floodgates are beginning to open with the recent additions of websites that sold counterfeit goods. 7 such sites are now being blocked across the UK that had been deemed to be selling counterfeit Cartier International, Montblanc & Richemont watch products and other related paraphernalia.

So while one site has been removed, many more have been added and it appears with the recent bulk of blocks that the speed at which sites are being added to the list is ever increasing. I fear for the UK internet, how this will transpire and ultimately where site blocking via court order will end. Sadly, blocking sites using such a method does not mean they stay blocked, from proxy type sites to VPN use, any site is accessible with little know how and a few dollars a month. More worrying is how the freedom of the internet in the UK is being restricted and it takes a third party VPN provider to access a free and open internet.