The Top 3 Best VPN for Europe 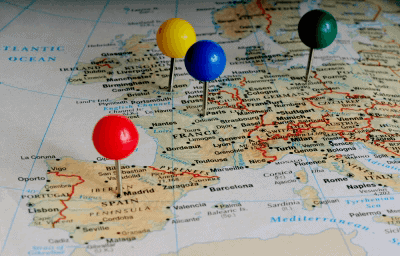 If you’re looking for the Best VPN for Europe then you’ve come to the right place. In this guide I’ll show you the essential VPN providers that are the best for Europe. So if you’re travelling to Europe or you live in a European country then this guide will inform you of the best VPN solution.

Europe is unique made up of around 50 different countries and a whole host of languages. As a European myself one of the things I love about Europe is how compact it is compared to other places in the world in terms of differences and culture.

Hop on a short 1-2 hour plane journey and you can be in a completely different country with different languages, currencies, customs, food and more. There are just so many great countries in Europe from East to West, North to South.

Europe is wide and varied.

If you’re planning on travelling to Europe from somewhere else in the world then having a VPN is essential especially if you intend on using public wi-fi in hotels, hostels, cafes or public spaces.

If you live in Europe then the requirement to use a VPN is ever growing as websites become more restricted, especially services like torrents and with governments (mainly my own!) snooping more on our online lives than ever before.

IPVanish is the number one service I turn to when travelling through Europe. In fact, it’s the service I also use on a regular basis here in the UK but comes into its own no matter where I travel to in Europe.

The reason? IPVanish boasts over 87 different servers in Europe with 36 countries covered. That’s pretty much every corner of Europe covered with actual servers in the country and those that don’t yet have a server are more than likely to have one in a neighbouring country.

It’s not just your usual run of the mill western European countries either, their coverage extends from cooling Scandinavia to the heat of the Mediterranean, from the bustle of London to the beauty of the Ukraine. The Baltic’s, the Balkans and even the mainland of the Balearic’s are covered by IPVanish.

So if you’re travelling to a European country or hopping between countries you’re more than covered for the whole of Europe. If you live in Europe then most major locations are covered with in-country servers. Those countries that aren’t covered often have servers in bordering countries so speed will not be an issue.

With apps for Android and iOS and software for Windows and Mac IPVanish have you covered regardless of what device you’re using.

At the time of writing IPVanish currently have European servers in the following locations :-

For an up to date list see our IPVanish information page our read or IPVanish review for more details.

VyprVPN is another large provider that have Europe well covered. With servers in 23 countries spanning the whole continent of Europe their service is suitable for both citizens and travellers alike.

While VyprVPN don’t have as many countries covered as the above provider they are spread strategically across the whole region in countries that serve all areas. Due to this there is no fear that you’ll be in a region that isn’t served either directly in the country you’re in or by a nearby neighbour.

VyprVPN is unique in that they own and operate the whole infrastructure of their network meaning they don’t rent servers from 3rd parties. For those who are interested in protecting their privacy this is a huge plus.

Their service is available on all major devices including PC, Mac, Android and iOS and with simple and attractive software getting connected is a breeze.

A 3 day trial is available which makes VyprVPN stand out from the crowd. This gives you enough time to test out the service before deciding whether to keep it or not. You do have to enter your payment details first but you won’t be charged until the 3 days have elapsed. If you find the service isn’t suitable then cancelling is made easy and you won’t be charged.

However with their extensive network and quality service I’m rather sure you won’t be cancelling.

At the time of writing VyprVPN currently have European servers in the following locations :-

For an up to date list see our VyprVPN Information page our read our VyprVPN review for more details.

ExpressVPN is the big one when it comes to European Countries. With 43 of the 50-something total, they have every area covered and more!

With so many countries covered it isn’t even a case of choosing a server in a nearby country for most cases, they basically have the whole European map marked down with flags for locations they have servers.

If you live in Europe then you’re likely to find a server in your country and if you’re travelling through Europe extensively then you’ll more than likely meet a server location at every country you visit.

As with the other providers on the off chance you arrive in a country that isn’t covered you can be sure that ExpressVPN will have a server in a neighbouring country.

ExpressVPN has a 30 day money back guarantee to give you time to test the service and see if it really meets your needs. So if you live or are travelling in Europe then you really get to give it a good test before deciding if it is doing the job you need it to.

Software and apps are available for Windows, Mac, Android and iOS so you can get connected regardless of if you’re at home or on the move.

At the time of writing ExpressVPN currently have European servers in the following locations :-

Image courtesy of Gualberto107 at FreeDigitalPhotos.net