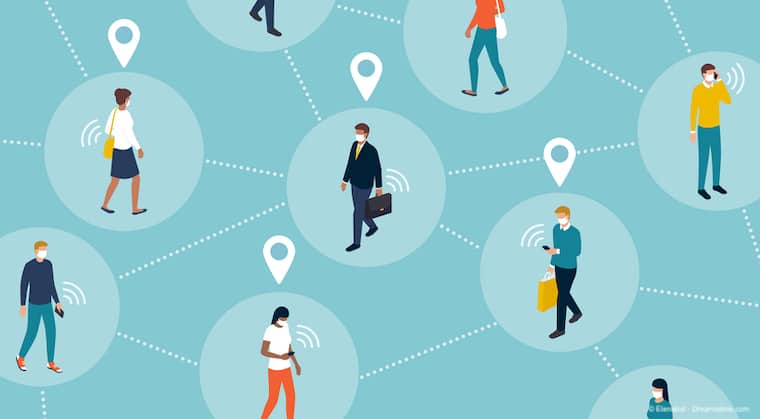 Concerns about the privacy implications of some of the technological solutions to the coronavirus crisis continue to grow both in the UK and USA.

In the UK, plans to roll out an app which will warn people if they come into contact with someone who tests positive have led to calls for transparency and openness about how such an app would work from none other than a former head of MI5.

According to City AM, Lord Evans, who used to run Britain’s foremost spy agency, has cautioned that the app would be a “severe intrusion into personal privacy” and said the government risks losing the support of the public unless it is completely clear about how the app works and places time restrictions on its deployment.

There is yet to be a formal confirmation from the UK government that they are working on such an app, but similar projects have been rolled out in other countries around the world. Earlier this month we reported on the significant privacy concerns that have been raised about a very similar app in Singapore.

Like the Singapore app, the UK app is expected to use Bluetooth signal to recognize and store the details of nearby phones. When a person tests positive for coronavirus, this will be recorded on the app and anyone who has been in close contact with them over the past fourteen days will be warned.

The UK is expected to leave a delay between contact and the warning to ensure that the identity of the individual with the virus is not revealed.

According to City AM, the app is expected to be a core part of the UK’s strategy for lifting the nationwide lockdown that is now entering its fourth week. However, there is still debate about how to persuade people to download the app, not least because it needs at least 50% of the entire country’s population to download if it is going to be effective.

Lord Evans warns that such an app needs to be based on a “transparent legal basis” and there must be appropriate legal redress for anyone who feels it has breached their privacy.

“People may consider the kind of surveillance needed to keep COVID-19 at bay a price worth paying, but public confidence will only be retained in the longer term if the right controls and accountability are in place,” he wrote.

We heartily concur with his sentiments. If technological solutions can help the battle against coronavirus then, of course, that option must be explored. But people’s privacy must not be sacrificed unless it is absolutely necessary, and even then safeguards and time-limits must be in place to ensure emergency changes don’t become the norm.

In the USA, coronavirus privacy concerns are currently centred on the son-in-law of President Donald Trump, Jared Kushner.

Kushner is believed to be leading a White House taskforce which has reached out to a number of major US healthcare companies to explore the possibility of creating a national coronavirus surveillance system.

According to the Politico website, the system would give the US government a near real-time view of where patients are seeking treatment and for what, and whether hospitals can accommodate them.

The idea is that such a system would help the government know where the virus was worse and target resources accordingly, as well as determine where in the country stronger lockdown powers are needed. On the face of it is a good idea.

But the system would also involve a significant increase in government use of patient data. US health laws already have built-in exceptions when national security issues are at stake.

But there are significant worries that this plan will go even further with some even equating it to the widely derided Patriot Act that came into law in the wake of the 9/11 terrorist attacks.

The US government has already eased the rules around the sharing of healthcare data and told healthcare companies they will not face penalties if they share information with state and federal officials.

Few people would argue with greater national use of patient data if it can help the US government to get the coronavirus under control and save lives. But as with the proposed tracker app in the UK, any impact this might have on individual rights and privacy must be for a strictly limited period.

As Jessica Rich, a former director of the Federal Trade Commission’s consumer protection bureau told Politico, “This is a genuine crisis — we have to work through it and do our best to protect people’s health. But doing that doesn’t mean we have to destroy privacy.”

She is absolutely right and given the Trump administration’s flagrant disregard for individual rights and privacy in much of its prior legislation, this is a genuine concern.

Indeed, some experts have already asked whether the additional powers Kushner is reportedly discussing are really necessary at all. The US already has a system called the National Syndromic Surveillance Program which is based in the Centers for Disease Control and Prevention and has been used to handle previous epidemics.

Former CDC Director Tom Frieden is just one person who has argued that scaling up this system would be faster, more effective, and have fewer long-term implications than creating a whole new system from scratch.

Given the current global crisis and the panic that it has created, we should be reassured that in both the UK and the USA, privacy concerns are still being heard as governments seek innovative ways to get the coronavirus pandemic under control.

But it is vital that those voices are loud enough to have an effect and that any solutions that affect individual privacy are strictly controlled, safeguarded, and time-limited to ensure that they do not linger once the virus is under control.