Does Surfshark work with Netflix? 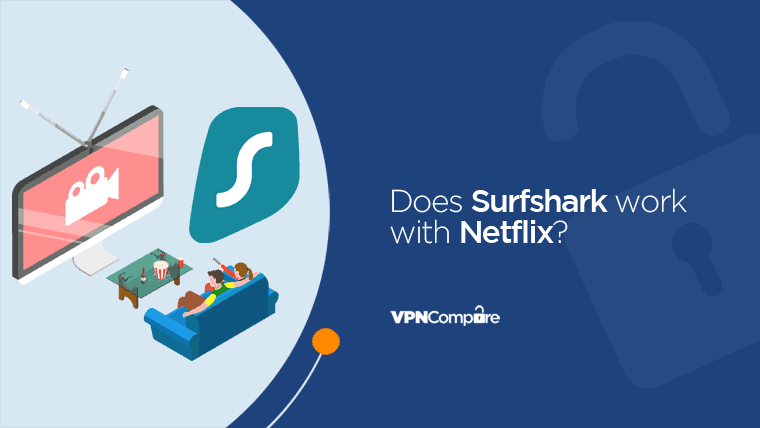 Netflix is the online streaming service that, more than any other, has revolutionised the way we watch TV shows and movies.

But even Netflix is far from perfect. How often have you read about a great show or film and gone to watch it on Netflix only to find that it isn't available in your Netflix library?

Netflix's expansion into a global streaming service has created as many problems for users as it has solutions. And it is one of the main reasons why Netflix users are increasingly turning to VPNs like Surfshark.

But, can you use Netflix with Surfshark?

In this guide, we are going to look in more detail at using Surfshark for Netflix and explain to you how the combination of Netflix with Surfshark could well be your ideal entertainment solution.

We will tell you everything you need to know about their service and why it works for Netflix as well, if not better than every other VPN on the market right now. We will look at the features that make Surfshark ideal for Netflix and the other great features it offers too.

We will even offer some troubleshooting advice should you run into problems when trying to use Surfshark with Netflix.

Can you use Surfshark with Netflix?

The short answer to this question is Yes… but…

Don't let that ‘but' put you off, though. Surfshark for Netflix is still one of the best combinations around.

The reason we have added that ‘but' is that Netflix has a total of 190+ different services. It is available in just about every county in the world, apart from Communist China, North Korea, and Syria.

It blocks VPNs for all of them and it is a big job for VPN providers like Surfshark to get their VPN services working on just one of those local services to let you watch Netflix anywhere.

That's why Surfshark has focused its efforts on just those countries and regions where there is significant user demand.

For a lot of VPNs, this has meant settling for just the US and the United Kingdom. But Surfshark has gone much further and unblocks Netflix in no fewer than 16 different countries.

Which Netflix services does Surfshark work with?

The countries libraries which you can use Surfshark VPN to unblock Netflix are:

How to use Surfshark to unblock Netflix

Once you have chosen to unblock Netflix with Surfshark, getting everything set up is actually surprisingly simple.

All you need to do is follow these few simple steps: 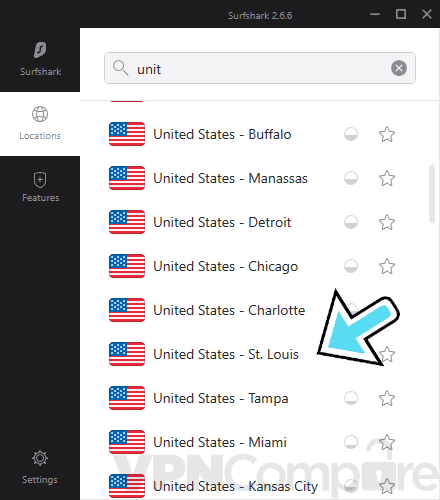 You should now automatically be connected to the Netflix library of the country whose server you connected to.

If you have any problems and are still seeing a proxy error, contact the Surfshark customer support team. They are available around the clock and always willing to offer a helpful and constructive customer service.

Why you need a VPN with Netflix

In common with most other streaming platforms, Netflix sources the bulk of its content from other content producers. It pays for the rights to stream these shows and movies, but those rights are sold by country and Netflix is not always the highest bidder.

As a result, every Netflix content library is different. If you are a Netflix UK subscriber, you will get access to a selection of TV shows and movies. But if you subscribe to American Netflix, you will be able to watch a completely different range of content.

This is great if everything you want to watch is available in your local Netflix library. But the reality is that this is very rarely the case, which is why so many Netflix users are turning to a Virtual Private Network (VPN) like Surfshark.

A VPN lets you redirect your internet connection through an overseas VPN server. When your data passes though that server, one of the things that happen to it is that the IP Address that it is tagged with is changed.

What is an IP Address?

IP Addresses are small bits of code that act like your internet address. Your IP Address indicates precisely where you are connecting to the internet from.

By looking at your IP Address, Netflix can see where in the world you are located and determine which of their content libraries you should have access to.

Netflix looks at the IP Addresses of all its customers routinely and uses them to determine which library they can watch. It then blocks access to all its other content libraries.

This is where a VPN like Surfshark comes in.

By connecting to a VPN server in a different country, it is possible to fool Netflix into thinking you are located elsewhere. This in turn lets you open the Netflix content library from that country and watch any TV show or movie you want from that country too.

Take a quick look around our website, or any VPN-related site for that matter and you will see that there are hundreds of different VPNs on the market.

Narrow that down to the Premium VPNs and there are still dozens to choose from.

So, why opt for Surfshark VPN in particular?

The answer is that out of all the other VPN service providers out there, Surfshark offers the best feature combinations to get a VPN working with Netflix. All VPNs provide different features, but if you want to be able to access Netflix libraries from overseas, Surfshark offers everything you need, including:

Surfshark's speeds are up there with the quickest of any VPN we have tested.

Crucially, these speeds are consistent, too, which makes them ideal to stream Netflix from a location outside your home country. If you want to enjoy Netflix TV shows and movies, server speeds matter and Surfshark can deliver the best connection speed around.

All VPNs shout from the rooftop about their servers. They will tell you they have many thousands of servers and their servers are located in all these far-flung countries across the world.

But if you want to stream Netflix US or another Netflix library, you need servers in that country. Surfshark's server network is a large one, but it also features multiple servers in all the most popular locations.

These are the servers you need when streaming content Netflix and Surfshark delivers.

You can install the app onto a desktop device such as a Windows, macOS, or Linux computer and an Android or iOS mobile device too. The app has a standard design across all platforms which is great if you are using it on multiple devices.

As VPN apps go, Surfshark's is up there with the best and if you want to stream Netflix on any device, it can do the job.

If you have connected to Surfshark and are still seeing a proxy error, there are a few things you can try before reaching out to customer support.

A server glitch could be the problem. Switch to a different server and try again. This will usually fix the problem.

Some browsers are more temperamental than others. If you are having problems, try a different browser and log-in again. This can be a quick and effective fix.

Use a wired connection

Your problem could be caused by a Wi-Fi issue. Try connecting to your Wi-Fi router directly and see if this helps.

If your Wi-Fi is the problem, restarting your router could solve the problem. This can work with VPN services and all sorts of other software issues too.

Other reasons to choose Surfshark

Using Surfshark for Netflix is a big selling point, but we know that accessing streaming services is not the only reason people sign up for a VPN service.

The good news is that this is not the only reason to choose Surfshark over other VPN services either. There are lots of other features that you can benefit from beyond those we have already mentioned. These features include:

This helps to ensure Surfshark works with Netflix but there are a number of other privacy benefits from websites and streaming platforms not being able to see your IP Address too.

Surfshark logs a little more data than we would like, but it is still preferential to the privacy risks you are undertaking when going online without a VPN connection.

Being headquartered in the British Virgin Islands also means they are not subject to intrusive local data retention laws too.

Oh, OK, we know unblocking American Netflix and other Netflix libraries matters and Surfshark for Netflix is the ideal VPN for the job.

The good news is that Surfshark works on other streaming sites too. So if you want to unblock things like Amazon Prime Video, BBC iPlayer, Peacock and Disney Plus, Surfshark can do the job for you too.

Is using Surfshark with Netflix legal?

Surfshark and all VPN services are all perfectly legal to use in all but a handful of countries around the world.

Using Surfshark for Netflix libraries outside your own countries, including American Netflix is therefore not a crime. But it might be a breach of your Netflix agreement and there is a chance that they could suspend or cancel your Netflix account if you are caught.

However, there are no known reports of this ever happening.

When you connect to a VPN, just ensure that you enable the kill switch. That way, if your VPN server connection goes down, Surfshark will cut your connection.

Can I use a free VPN instead?

Not really. The problems with free VPNs are plentiful, but when it comes to using them for streaming on Netflix or accessing Netflix libraries such as Netflix US when you are not in that country, there are some specific issues.

Firstly, a free VPN will have a very limited VPN server offering.

This means that even if there is a server available in the regions you need (say the US), the chances are that it is being heavily over-used. Therefore, the speeds will be insufficient for streaming TV shows or anything.

A lot of providers also have data caps or throttle speeds to stop people using their US server to access US Netflix, for example. They won't say this on their site when you are checking them out, but try and watch TV when connected to them and you will soon find out.

We won't even get into the privacy and security concerns that come with a free VPN but suffice to say, it isn't good and you don't want to take the risk.

If you want to access a Netflix library from a country other than your own, Surfshark is an excellent VPN for the job.

It is able to unblock 16 different Netflix libraries, including the US version. It has the speeds and usability you need to enjoy your favourite TVs shows and movies, and it offers a great all-round service.

There are plenty of other providers that offer a good VPN service and some that can beat Surfshark in certain areas. But when it comes to streaming Netflix, Surfshark is as good as it gets.

Looking for other VPN services that work with Netflix? Check out our Best VPN for Netflix guide.