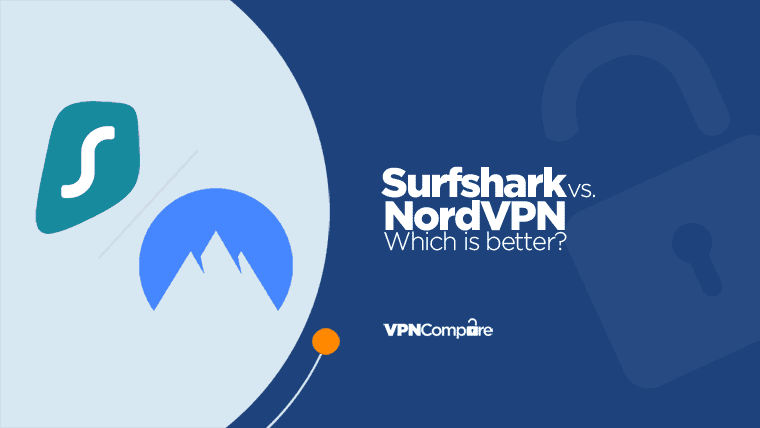 Deciding between NordVPN and Surfshark is incredibly tricky. In this article we'll be contrasting their features to help you choose.

By using comparisons, it's the easiest way for you to determine the features that matter most for your use.

With that in mind, we'll be comparing both NordVPN and Surfshark. A historic industry giant versus the hottest up and coming VPN star.

The two services are very similar in a lot of aspects. In fact, they are so identical that discovering which one is better is a challenging task.

It's a task we're ready to take on, keep scrolling to find out which is better. (Oh, if you're itching to see the winner you can skip right to the results).

Let's start with the logging policy of the two services.

NordVPN has been known as one of the best services to use from a privacy perspective for years, now. It keeps no logs of your browsing behaviour or access logs of your connection.

It only keeps the data that you provide during registration, which is the necessary minimum for it to provide services to you in the first place.

Other than that, everything else is done through automatic processes that do not require user data.

The service is also based in privacy-friendly Panama, so it is outside of the 14 Eyes' jurisdiction, and it cannot be ordered to start recording user data.

NordVPN has had its service independently audited by PricewaterhouseCoopers AG, Zurich, Switzerland to confirm this.

Then, we have Surfshark – a relatively new VPN that has been in business since around 2018.

However, the service surged through the ranks and it managed to beat all competition thanks to its excellent features, with a zero-logs policy being among the very strictest.

To start, let us note that this VPN is based in the British Virgin Islands, which is another excellent location from a privacy standpoint.

As for the data that the VPN logs, its privacy policy says that it doesn't include anything that could ever be used for identifying the user or what they may be doing online.

Once again, the only info that they are collecting is users' email and encrypted password, plus the billing info and order history. This is the data provided during registration, just like what we have seen at NordVPN, and it is necessary for the VPN to provide service.

Lastly, the service collects data of its app's behaviour to discover potential bugs and issues, but that's it. 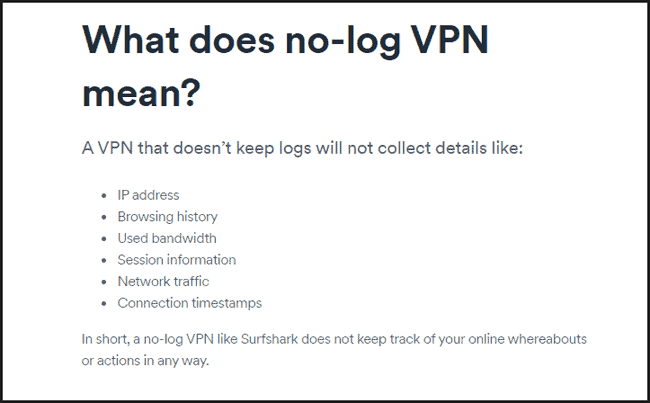 Surfshark lists all the things they don't keep.

Surfshark also claims to have been audited but this has been called into question by security researcher Connor “PWire” who said of the auditor report that “we can see that the scope was so little that it is more of a PR stunt than it is guarantees of security” (Source).

From the logging claims, both NordVPN and Surfshark are excellent.

Neither collects anything more than what is necessary, and they are both safe from being forced to collect user data due to the privacy-friendly jurisdictions in which they operate.

However, with NordVPN's service being audited more thoroughly and by a higher authority, the first point goes their way.

Streaming is one of the most common use cases for a VPN these days, especially when it comes to overseas content. Due to legal and other reasons, streaming services are often limiting their services to only a few regions.

With NordVPN, you can easily connect to those regions and unblock nearly any streaming service out there. It works with Netflix, Hulu, HBO, and even BBC iPlayer.

Meanwhile, it is fast enough for you to enjoy all the content offered by these services without experiencing buffering.

You can stream HD videos just as easily as you would without a VPN. Meanwhile, its 5,800 servers located in 59 different countries will pretty much guarantee an entirely open internet.

When it comes to Surfshark, the service offers a significantly lower number of servers – 1,700.

However, you would likely agree that this is by no means terrible. If NordVPN wasn't such a giant in the industry, this would have been rather impressive.

One detail that does impress is that Surfshark covers more countries than NordVPN – 63 of them. At the same time, it is also able to unblock Netflix in multiple countries, and it even includes some countries that NordVPN doesn't, such as Russia.

If you're a Netflix fiend then you'll appreciate the vast 16 regions that the service unlocks, more than any other VPN service.

In fact, Surfshark is a commonly recommended service for unblocking almost all the most popular streaming services, including the likes of Disney+. They even manage to unblock some of the more obscure services from Japan, Korea, Malaysia and elsewhere.

Both VPNs are excellent when it comes to streaming, but we have to side with a Surfshark on this one, just because of the massive number of services it unblocks.

While NordVPN is excellent at unblocking too, we can't argue with the vast amount of Netflix regions that Surfshark works with.

It's a close call on this one.

To make the most out of using a VPN, you need a service that supports as many platforms as possible, and with as many simultaneous connections as possible.

NordVPN understands this, as we live in a world where every person has at least one device that can connect to the web and that needs VPN protection to be safe.

This is why the service offers protection for 6 devices at the same time. With it, you can protect all of your devices if you happen to use multiple simultaneously.

It is also great for protecting an entire small family at the same time, all with a single licence.

On the other hand, we have Surfshark, which offers unlimited connections per license. A single license obtained at an even lower price, as we will discuss further down will protect as many devices as you or your entire family own.

There is nothing much else to say, except for the fact that Surfshark definitely wins in this category.

As stated, Surfshark is a clear winner. Despite NordVPN's pretty good 6 simultaneous connections, it cannot compare to the younger competitor's unlimited coverage.

With all of those simultaneous connections possible, you might want to know which platforms you can use NordVPN on.

The number of devices and systems that NordVPN covers is more than decent, and it includes all popular ones. With it, you can protect:

Thanks to the two browser extensions, you can use NordVPN on pretty much any device that can use at least one of the two browsers. That gives you nearly an unlimited number of devices to protect with NordVPN today.

The app itself is very user-friendly, presenting you with the map of the world which shows all of its server locations. All you need to do is click on the location of your choice, and you will connect to it. 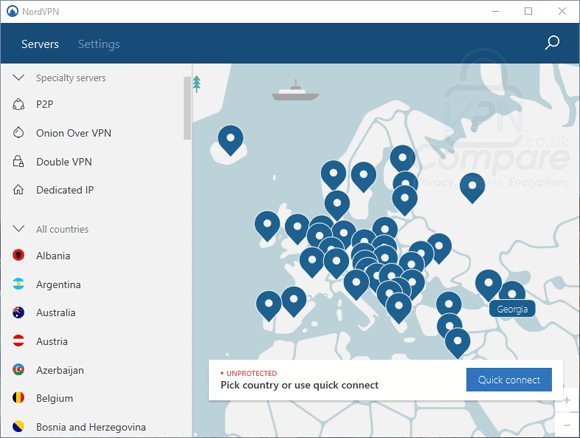 When it comes to Surfshark, once again, it rises to the challenge of a much older service. It already beats NordVPN by serving unlimited devices.

As for which devices you can use it on, the list looks somewhat similar to the one we have seen above, and it includes:

As you can see, just like NordVPN, Surfshark also offers Chrome and Firefox extensions, so it also covers as many devices as can run one or both of the browsers

Furthermore, Surfshark also covers gaming platforms like PS and Xbox, which were clearly left out by NordVPN.

Surdshark's app is also straightforward to use, with a clean interface and simple navigation which makes it very user-friendly. 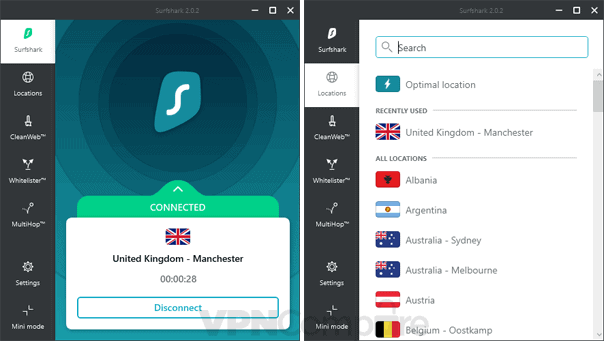 Although Surfshark appears to cover more devices, these don't have dedicated apps and would require manual set-up. The same could be said for NordVPN.

For us, it came down to interface. We like the clear lines of the NordVPN app and the ability to connect both using a world map view and simple country listing.

Again, another close call but NordVPN takes this one.

Lastly, let's talk about prices. NordVPN offers relatively standard prices for its plans, and it has four different plans for you to choose from.

As we are about to see, this is a VPN whose plans are focused on long-term dedication, which could be good or bad, depending on what you need.

As you can see, the service offers rather low prices due to massive discounts, but it also wants you to commit to it and use it for years.

This is not necessarily a bad thing, provided that you are happy to stick with the same service for the foreseeable future.

If you simply want protection, it is an excellent choice.

Only note that you need to pay long-term plans at once instead of monthly. Other than that, we should also note that NordVPN offers a 30-day money-back guarantee for all of the plans, so you have a month to change your mind if you commit.

Now let's see how Surfshark compares. This service offers only three plans, meaning one fewer than NordVPN. The plans themselves are similar in terms of length, and they look like this:

It is immediately apparent that this VPN also offers only a monthly plan and then jumps straight to the yearly one.

However, other than that, you will quickly notice that its monthly price is identical, but its discounts for long-term plans are more significant. It offers a 50% discount for a yearly plan, whereas NordVPN offers 41%.

In other words, Surfshark's 2-year plan is cheaper than NordVPN's 2-year or even its 3-year plan, so from the pricing standpoint, Surfshark is a preferable option.

Like with NordVPN, you get a 30-day money-back guarantee with each of the plans.

Interestingly enough, the supposed underdog wins again, this time due to higher discounts on its long-term plans.

The plans are of mostly the same length, although NordVPN does have a fourth plan that would protect you an entire year longer than Surfshark. But, even that 3-year plan is still more expensive monthly than Surfshark's 24-month plan, so we have to give a point to the younger service.

Surprisingly enough, it seems that the underdog Surfshark won the battle, at least when it comes to these aspects.

The fact NordVPN's logging policy has been audited fully by a higher-authority saw it take this category.

NordVPN wins in terms of server coverage, even though it covers fewer countries. It has several thousands of servers more than Surfshark at this time, which gave it a substantial edge. But, on all other aspects, Surfshark managed to beat the other service, despite its great offering.

Surfshark covers a lot of different devices, as does NordVPN but we felt the interface of NordVPN's offerings slightly surpassed the competition.

Finally, Surfshark offers lower prices, although its longest plan is still a year shorter than that of NordVPN. But, even as such, it ended up being cheaper than NordVPN's longest, due to a larger discount.

In the end, neither of the two services is bad. Surfshark simply offers a slightly better deal, although it is easy to see why. The service is young, as mentioned, and it entered the VPN industry only two years ago.

At the time, NordVPN already dominated the sector as one of the best in the industry, and Surfshark, as a newcomer, had to offer better features even to be considered. So, it did what it could to provide a better deal, and it paid off.

Now, it is up to you to decide whether lower prices and unlimited concurrent connections can beat a greater number of servers. But, no matter which VPN you choose, the most crucial part is that you will be well-protected and safe.

Both are excellent services. It's just this time, Surfshark took the top prize.

Why not check out ExpressVPN vs PureVPN or PureVPN vs NordVPN for more comparisons.