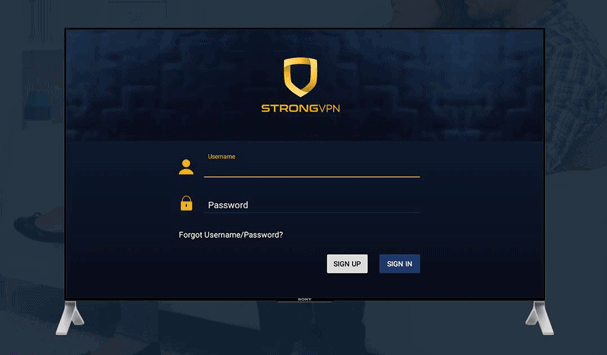 StrongVPN one of the longest-running and most popular VPN services has unveiled their brand new app for Amazon Fire TV and Fire Stick devices.

The Fire TV and Fire Stick have become two of the most popular TV streaming devices across countries where Amazon is available. The tiny plug-in and play devices offer access to a range of local and international entertainment services.

Privacy issues and geo-restrictions are two areas that don’t escape either the Fire TV or Fire Stick and as they require an internet connection to power the content, your privacy can be at risk.

Enter the brand new dedicated VPN app from StrongVPN which has been custom created to work natively on both the Fire TV and Fire Stick Generation 2 (The one with Alexa voice remote).

Unlike traditional devices such as tablets, phones and computers there are very few native VPN apps for the Amazon devices. While it’s possible to “sideload” some Android apps they don’t always function well, if at all when used on the Amazon devices.

StrongVPN’s dedicated app means that’s a thing of the past and you can now protect the privacy of what you’re watching or doing on your Fire TV or Fire Stick and unlock extra content.

How to get the new StrongVPN Amazon app

You’ll need either a Fire TV or Fire Stick Gen 2. If you don’t have one yet, you can get one here. You then need to create an account with StrongVPN if you don’t already have one.

Just follow the steps below to create an account and to get the new StrongVPN Amazon app on your Fire Stick or Fire TV device.

You can now use the Amazon StrongVPN app as if you would on any other type of device. Simply select a country to connect to and enjoy peace of mind.

Geo-blocking a thing of the past with StrongVPN

The Amazon Fire TV and Fire Stick work like any Android-based device allowing you to install additional apps. Many are for TV services such as BBC iPlayer and ITV Player.

Like all systems, these apps use geo-blocking to region restrict the content on them from being played outside their intended country, in this case, the United Kingdom.

By using the new Amazon app from StrongVPN you can unblock these apps allowing you to watch them anywhere in the world. So if you’re a Brit travelling abroad or you just love British TV you can now watch all your favourite services in any country.

Just pop your Fire Stick or Fire TV with StrongVPN installed in your bag when you’re next off on holiday and watch from anywhere in the world.

What is the Fire TV and Fire Stick?

The Fire TV and the smaller brother Fire Stick are multimedia streaming devices created by Amazon.

The devices plug into the HDMI port of your TV and enable access to a range of streaming services including everything from Amazon Prime to Netflix.

You can also install additional apps similar to an Android or Apple iOS phone and add services such as BBC iPlayer, ITV Player and other localised TV services depending on the country you live in.

If you don’t want to be locked into an expensive cable subscription then the Amazon Fire TV and Fire Stick can open up a whole world of entertainment possibility.

For those who use Kodi on the Fire TV or Fire Stick the new StrongVPN app can enable you to watch in private and access content that was previously restricted.

The new StrongVPN Amazon app is available now to all current subscribers and any that subscribe in the future. It is compatible with all Fire TV devices and Generation 2 Fire Stick devices (the one with Alexa voice remote).

After signing up for a StrongVPN service you can simply download the app from the Amazon store directly onto your Fire device at no additional cost.