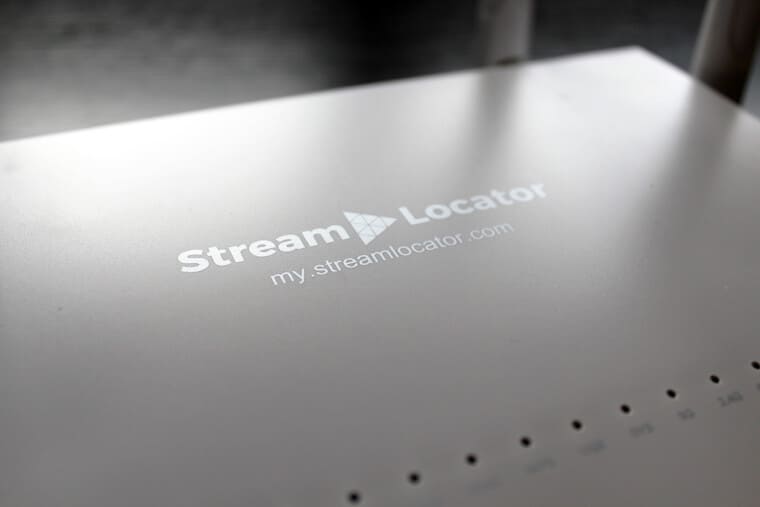 We've been testing and reviewing VPN services for eight years and over this time it has become clear that a large portion of users simply wants to unblock TV that is geo-restricted.

Everything from Netflix to BBC iPlayer, Disney+ to ESPN and more are sought after to be accessed in countries where they *ahem* aren't intended to be.

If this is you, this is where the StreamLocator router steps in.

It's not just another VPN router, in fact, it doesn't make use of VPN technology at all, but it does answer the problem of unblocking streaming services from across the world.

We've been testing the device for the past month to see if it is actually any good. Here are our findings.

What's inside the box? 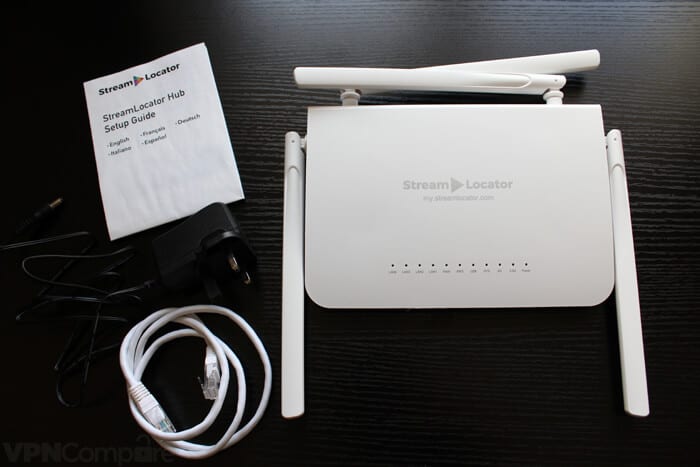 The StreamLocator router is actually relatively low profile but does span quite a large surface area.

Overall it's smaller than many home routers which come bundled with the average internet provider but again, the footprint is quite large.

At the back of the StreamLocator are two large antennas, with another on either side of the device towards the rear.

If you're hoping to make this device blend in with your living room surreptitiously, you'll be sorely disappointed and it's more suited to being hidden away.

On the back of the device are sockets for a Power Connector, 1 WAN and 4 LAN connection ports and a USB port.

There's also a reset button and a WPS button for connecting devices without entering the password. 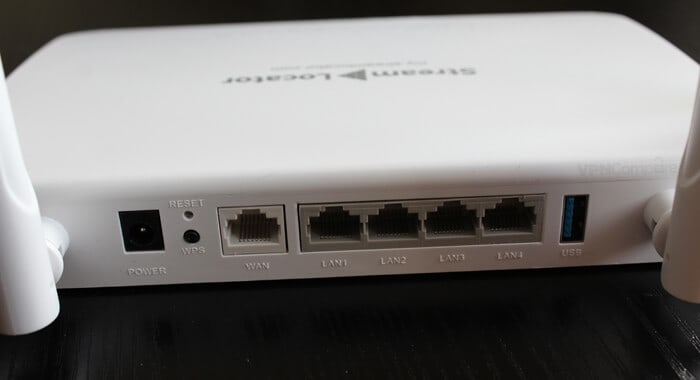 StreamLocator comes in white and there are no options for other colours.

On top of the device is the StreamLocator logo and a large set of lights, most of which you will ignore but are useful to check every connection type is active and functioning.

Over the course of the month, I used StreamLocator to access a variety of services and I'm definitely impressed.

No fuss of connecting to a VPN or messing around changing countries or servers.

Once it's set up, it's simply a case of visiting the streaming service of your choice and watching.

It really is that easy.

I mostly used it for US Netflix, Peacock, NBC Sports, BBC iPlayer and US Amazon Prime but there are a whole host of other services available via the device and I gave many of them a try.

There were no issues when watching for long periods. For example, streaming a full Premier League football match on a paid subscription of Peacock worked well as did it with NBC Sports.

Movies and series also worked well on both Netflix and Peacock with the Goonies and the new Saved by the Bell series playing fine with no issue.

I used StreamLocator on a Windows laptop, Amazon Fire TV Stick and via a Smart TV's built-in apps and all functioned well.

I did once see a drop in quality on a live football match but this was brief and didn't reoccur so is likely to be a temporary issue and possibly not one that was even related to the StreamLocator, it's difficult to tell.

The device's beauty is it uses the DNS system, which is often referred to as “SmartDNS”. This means there is no speed loss which you would usually get from the encryption used on VPN services.

It also allows you to get maximum speeds which is essential when streaming content from large distances.

This also means you could connect to the StreamLocator on any device even ones you don't intend to stream from because for all intents and purposes it's like using your regular internet connection.

Most websites and services you use will see your regular IP Address as the magic of unblocking is handled all behind the scenes by StreamLocator themselves. 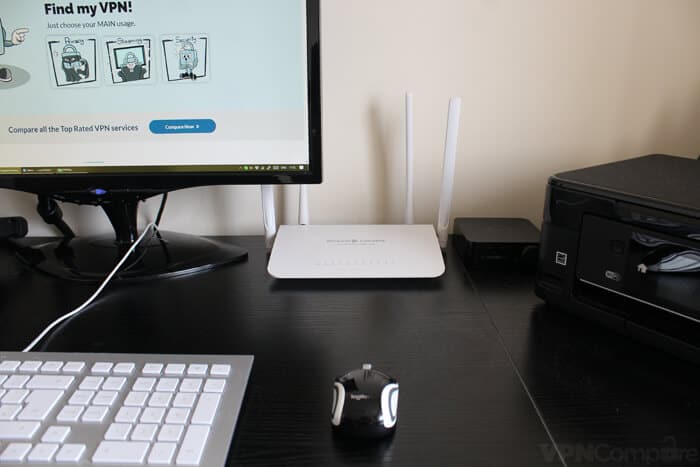 A device like StreamLocator is only as good as the services it unblocks.

If you're after accessing US or UK content, then you're in for a real treat. Almost every major streaming service is available and able to be accessed regardless of where you are in the world.

There are a handful of other services from other countries, but most of these concentrate on that particular Netflix region.

Sadly, if you're after accessing services from a wide range of countries, you currently won't be provided for.

For example, there are no Australian services available, even though there's a wealth of excellent content available there, much of which is free from services like TenPlay and 7Plus.

Not forgetting the big paid services like Stan, Kayo Sports and others, all which aren't supported.

In fact, outside of the US, Canada, UK, Germany, Italy and Switzerland there are no other country's services covered.

StreamLocator can, however, unblock Netflix from the US, Canada, UK, Germany, France, Brazil, South Korea and Mexico.

However, if you're after accessing content from the big media countries then you're well covered. I would, however, love to see some expansion in the future.

To their credit, StreamLocator does have a ‘Request a service' feature but quite what their threshold is for introducing a particular service is left to be seen.

Where one service has multiple countries available you'll need to manually set which region you want to access in the web-based control panel.

Thankfully this is extremely easy to do.

After logging into the web-based control panel, a simple dropdown menu allows you to select the region of the service you want to access. If you want to change that region, you can do so at any time and there are no limitations. 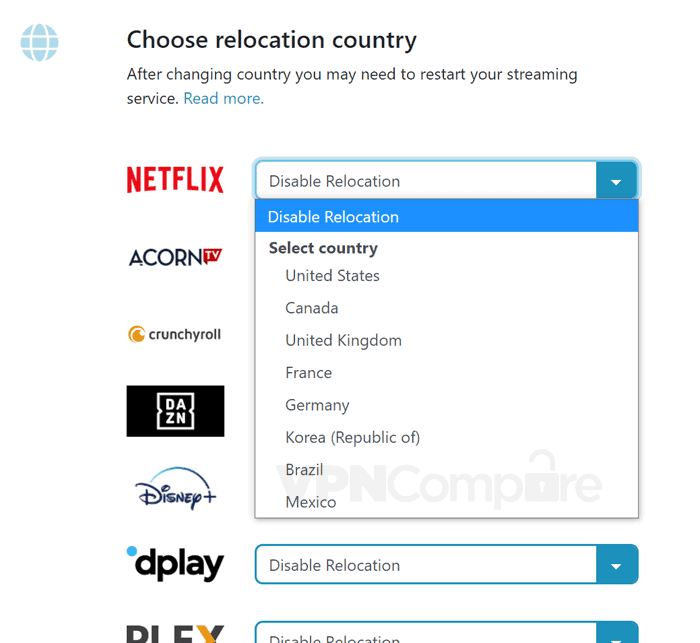 While you can use the StreamLocator wired, thanks to its four ethernet ports, many of you will likely use it via Wi-Fi to devices around your house, especially the likes of TVs and Amazon Fire TV devices.

In testing I found the Wi-Fi signal even using the 5GHz band to be excellent.

There was no trouble streaming across a standard UK house. With the StreamLocator positioned upstairs in the far corner of the house to its opposite side on the lower floor, there were no noticeable issues.

Even when watching in Ultra HD, I could skip back and forth with no more delay than using my regular connection.

Alongside the dedicated StreamLocator service, subscribers also get access to StreamLocator's own VPN service. Apps for this are available for Android and the Amazon Fire TV devices.

While it's not a requirement that you make use of this, it is a bonus if you require.

After unpacking the device and associated pieces, set-up is actually rather straightforward, although a little different to other routers you may have set up in the past.

The four antennas are already connected to the device so just need positioning. After which connect the supplied ethernet cable from the LAN port on your regular home router to the WAN port on the StreamLocator.

Next, connect the power cable to your power outlet.

StreamLocator advises switching off your home router and turning it back on, then waiting 5 minutes for reconnection. In reality, this is much quicker, but you're free to go make a cup of tea and it'll be ready once you're back.

The next step was a little confusing. You would expect to now connect to the newly created ‘StreamLocator' hotspot but this isn't the case.

Connecting to your regular Wi-Fi or wired internet connection you'll need to head over to the StreamLocator website, specifically ‘go.streamlocator.com'.

From here everything is straightforward and you simply need to follow the onscreen instructions over the four quick steps. 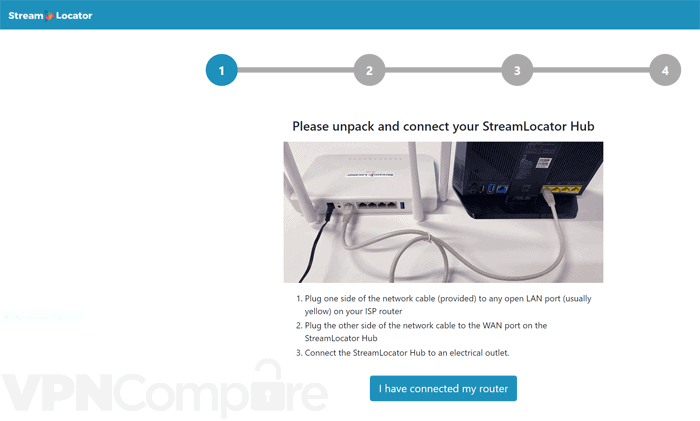 It's worth noting that your device's router name (SSID) and password are set (and stored) via the online panel.

The issue I have with this is if the website of StreamLocator were to go down, you would be locked out of changing your Wi-Fi name and password.

However, there is an upside to this meaning you can control all of this and more via any network, you don't have to connect to the StreamLocator connection to do it specifically.

There is nothing more to do apart from connect the devices you want to stream on to your new StreamLocator Wi-Fi connection or if you prefer via a wired connection.

You can stream on all the supported sites without doing anything else. No connection, disconnection, swapping servers – it just works!

The StreamLocator comes with two costs.

The initial purchase of the SteamLocator router and an on-going subscription.

Thankfully the initial purchase comes with 12-months of service. Buying the StreamLocator router costs US$83.88 or £62.09.

The ongoing service after the initial 12-months costs $6.99 per month.

The price of buying the StreamLocator is fair and while the monthly on-going cost isn't expensive, it could be seen as comparably.

You can buy a VPN service much cheaper than $6.99 p/m. For example, committing to longer periods with a provider like NordVPN costs just $3.71 per month or with Surfshark as low as $2.49.

This isn't always the case with VPN providers as it's not the purpose of their original sale.

Paying a small premium for that may certainly be worth it for you. 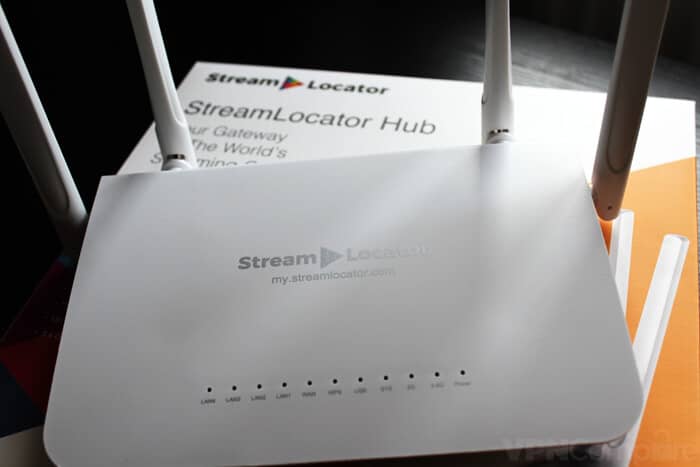 I love the StreamLocator. Let's just start saying that.

It just works and that's often a rarity these days.

Opening the box and setting up StreamLocator is effortless. This is a massive bonus because if you're not very good with technology or, for example, you've got ageing parents who just want to stream overseas, the system is accessible.

With a quick 4-step setup process, there is very little that can go wrong.

Once it is set up, you can connect any device, even those that don't traditionally support VPN or SmartDNS services and start accessing your favourite content from around the globe.

While I love the device, there are one or two negatives.

Content available covers all the most popular services and countries like the US and UK are well catered for. Outside of that, it is very sparse. If you want to unlock content from most other countries, then you'll be out of luck.

StreamLocator is a relatively new device so I would hope to see that change in the coming months and if there's a service you're after you can request it and hope they get enough other requests that they follow up on it.

The StreamLocator router's price is fair and comes with 12-months service, which makes it even more of a bargain. However, the on-going monthly cost after the initial year is ever so slightly on the higher end.

As I said earlier in this review though, you're paying a small premium for StreamLocator taking the work out of it for you.

All you do is sit back and stream your favourite channels, networks and shows. It really is that simple.

If you're after unlocking content and the popular services like Netflix, Amazon Prime and Disney+ are what you're after then you should definitely consider getting a StreamLocator – you won't be disappointed.

Overall it's an excellent system and I just hope they add more services soon.

StreamLocator can be purchased cheapest directly from the manufacturer, alternatively it's available on Amazon.