Spies, Secrets and Lies an Index on Censorship event 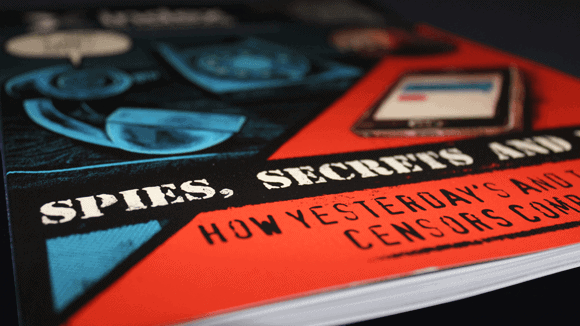 I was recently invited by leading VPN provider IPVanish to attend an event hosted by the organisation Index on Censorship.

Spies, Secrets and Lies took place at The Frontline Club in central London not far from Paddington tube station on 13th October, 2015 and was attended by around 250 guests made up of journalists and other interested members of the public.

The event that was free to attend sold out extremely quickly showing the level of interest in censorship and privacy topics in the UK.

Index on Censorship magazine that accompanied the event.

The New Spymasters author Stephen Grey kicked off the evening. Starting by recounting his first dealing with Index on Censorship in which at the time he was making a documentary with Wikileaks founder Julian Assange and used the organisation to invite Assange to the UK for a debate on censorship. The plan was to avoid the UK authorities blocking his arrival. Grey quipped it worked and perhaps a little too well as Assange finds himself still in the UK.

Grey touched upon how there are conflicting views surrounding how releases such as Wikileaks and more recently the Edward Snowden affair about if releasing huge caches of documents are beneficial.

Grey's presentation carried a theme of how censorship has changed and moved into the digital world and he pointed out users themselves are putting their every thought and sometimes every movement on public platforms and because of social media the battlefield has changed, “states are struggling desperately to catch up” he said. Summarising how past atrocities and events had been possible to be covered up yet now almost impossible with the freedom social media brings.

Continuing his opening speech Grey emphasised that while states don't have the capacity or even the want to listen to every individual phone call that if you do happen to be caught in the spotlight then “it's quite chilling to know the amount of information that can be unearthed about you and not just you but all your friends and contacts”.

Has censorship, spying and subterfuge changed over the years?

Journalist Ismail Einashe answered the question pointing out that countries such as Ethiopia have always had a poor human rights record and jailed journalists and how in modern times this has moved to jailing bloggers. With more freedom has also come more censorship.

Associate Editor of the Observer newspaper Robert McCrum explained, “the big difference between then and now, it was simple. With the cold war, you knew who the enemy was and you knew what the enemy did” and continued to state “the big change is in my mind is this extraordinary explosion in global consciousness”. The world knows now more than ever what is going on on a global scale.

Who do technological advances give the power to?

Chinese writer Xiaolu Guo expressed that on the internet in China state surveillance and censorship is a daily occurrence that ordinary citizens live with, she stated however “the internet has created a great advantage as well because it has decentralised power, there is no one boss in the internet world.” going on to say that “since the internet started in China 20 years ago it created great freedom, much greater than before”.

Stephen Grey brought consideration to the discussion of how governments are using social media to aid propaganda but how this has always existed in ways before the online revolution and how governments are petrified about not being about to control the mass regardless of how good the boffins at GCHQ and other spy agencies are. 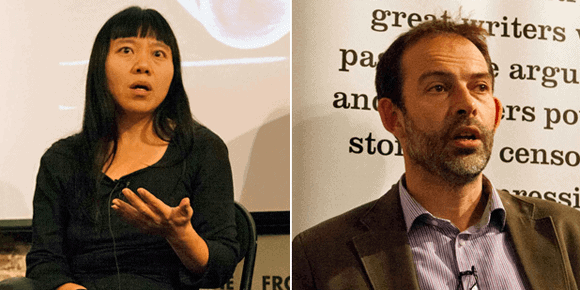 How do we deal with censorship and who controls it?

The debate took a twist and threw up the question of censorship and should we have it and if so who decides the limits of what is allowable or not. Xiaolu Guo from a Chinese perspective felt that being brought up in China she felt strongly that censorship should exist in some form to deal with the inherent nasties that small sections of society often put onto the internet.

Robert McCrum questioned his own beliefs as while he is against paedophiles and terrorists he made an excellent point about freedom and how you can't be a little bit free and often with freedom you come across views you don't actually like very much.

The internet in the western world has brought about self-censorship Ismail Einashe pointed out who touched upon the fact users often now think before they write or publish thoughts onto the internet for fear of the masses disagreeing.

So what did I take away from the event?

There are many groups like Index On Censorship championing similar causes and events such as this are growing in popularity.

Although censorship still exists it has now moved online but with this online censorship we also have the tools to combat it and examples have so often been seen where the mass can access impartial information by using tools such as Tor, a VPN a provider like IPVanish or other encryption products.

However, while bypassing censorship is available to dissidents and everyday citizens it is impossible to contain that and as such those tools are also available to wider society in factions that are not agreeable with general public consensus. When you enable encryption, the ability to bypass censorship and increased privacy you do so for the good and bad of the world and this cannot be defended against.

The impending years will be a continued battle between governments to impose censorship and those within the cryptography industry to find ways around it.

It is clear from the panel that wherever you are in the world censorship is to be found in every corner on a differing scale and perhaps the answer is not to seek a world without censorship but to find a middle ground that won't force self-censorship or push individuals to seek answers from select sources that reaffirm their beliefs without a rounded view.