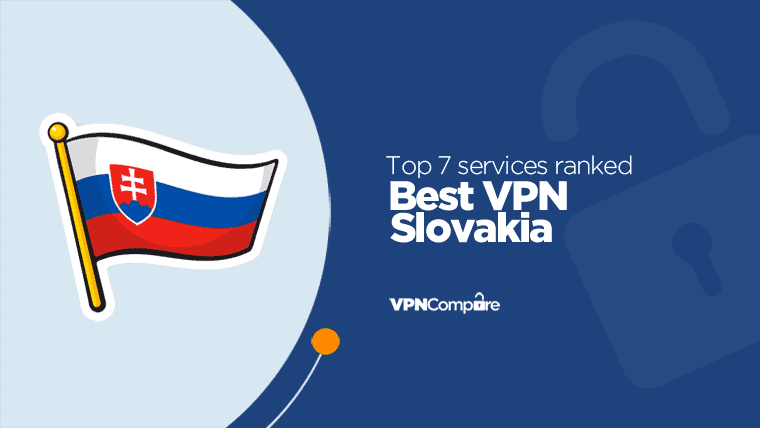 Slovakia is a country with decent internet freedom, but things can always be better and using a VPN is recommended.

If you plan to travel there, move there, or even if you're a local who lives there, you should consider using a VPN.

VPN technology comes with some great benefits, and it can not only ensure your online security, but it also brings some perks that make it worth having even when security is not among your primary concerns.

But, before we get to that, let us first see which VPNs are the best for internet users in Slovakia.

The first on our list is NordVPN a service from Panama, which is considered to be one of the best VPNs around the globe.

It has a massive server network, offering 5446 VPN servers in 59 different countries.

Slovakia is, of course, one of them, and NordVPN has as many as 18 servers in the country. With so many local servers, everyone who wishes to connect to the web from Slovakia will be able to do so, and not have their internet speed suffer due to overcrowded servers.

Furthermore, the service has a strict no-logs policy, which was proven by audits from third parties so should be trusted.

NordVPN is also an excellent choice when it comes to security and privacy on the internet, with robust security protocols like OpenVPN, and top-notch encryption, such as 256-bit AES.

Lastly, it features a 30-day money-back guarantee, in case it doesn't work well for you, and you decide that you want your money back.

Our #1 VPN for Slovakia

Next up, we have CyberGhost, a VPN from Romania that has been servicing users worldwide for over 15 years.

This VPN can help you do anything, including access blocked sites, unblock streaming services, play region-locked games, torrent in a safe way, and more. It has all the best security and privacy features that will prevent leaks and keep you semi-anonymous and secure.

CyberGhost also has a long, 45-day money-back guarantee, so you have a month and a half to check it out.

As for its server network, it has 6175 servers in 111 locations, covering around 90 countries in total. It has a strong presence in Europe, covering most of its countries. It even has ten servers in Slovakia, so you can access not only local content but also achieve excellent download speeds.

ExpressVPN is a service from the British Virgin Islands, and according to many, one of the top VPN servers around the globe.

It offers more than 3,000 servers in over 94 countries, which makes its network one of the largest in the industry. As expected, Slovakia is on the list of supported nations, alongside the majority of Europe.

In our tests, we found ExpressVPN to be one of the fastest which makes them ideal for downloading and for streaming.

Naturally, it is also great at bypassing geo-restrictions, it has top-notch security features, and it doesn't keep logs, which has been confirmed by third-party audits.

It even offers a 30-day money-back guarantee, no questions asked.

VPN.ac is a smaller VPN service than the industry giants mentioned previously, but don't let that fool you. It is just as capable as any of them when it comes to keeping you safe.

But, it is true that its server network is smaller, only covering slightly more than 20 countries right now. Still, its servers are strategically placed in all the most popular locations.

Unfortunately, Slovakia is not on the list, but there are plenty of servers in surrounding nations, such as Switzerland, Italy, Romania, Germany, the Netherlands, France, and more.

VPN.ac also features low prices, and you can protect up to 6 devices at once.

It keeps no logs, and it supports the new WireGuard security protocol, which connects faster and is claimed to be more secure.

Next up, there is Surfshark, a VPN from the British Virgin Islands that has managed to rise through the ranks and rub shoulders with the best of them, despite its young age.

Surfshark's biggest advantage over others is that it lets you use it on an unlimited number of devices at the same time. You can protect every device that you and your entire family have with one license.

Meanwhile, the service offers top-quality security, excellent speeds, support for many devices and systems, and a significant server network that has 1700+ servers in 63 countries. Slovakia is included on the list, which means that you can use Surfshark to browse local content and enjoy top connection speeds safely.

In the sixth spot, we have IPVanish, another excellent VPN service that is rated highly by its users.

IPVanish has a lot of advantages which it proudly displays, such as very low prices, a 30-day money-back guarantee, strong security capabilities, and alike.

It does offer servers in Slovakia, as well, with 4 of them based in the capital of Bratislava.

And, of course, the majority of other European countries are covered as well, so you have a large selection of connection points.

Lastly, we have Private Internet Access, or PIA, for short.

PIA is a VPN that is strict about its no-logs policy, and while it hasn't been audited to prove its authenticity, it has had it tested in multiple court cases.

This has turned it into one of the most trusted VPNs out there. It has strong security features, and it claims to be the world's leading VPN with one of the largest networks in the industry.

KAPE, owners of CyberGhost VPN recently bought out the service.

Its network has 12,249 servers in 74 countries. Slovakia is, of course, on the list, alongside the rest of Europe.

Not only that, but PIA offers some of the lowest prices among major VPN providers and it lets you pay anonymously using gift cards. As such, it is extremely privacy-friendly and an excellent choice for anyone who wishes to erase their online traces.

Why do I need a VPN for Slovakia?

You have probably asked this question already, and if so, here are some primary concerns that VPNs can resolve.

We mentioned this earlier, but Slovakia is actually in a pretty good place when it comes to online freedoms.

There were some concerns regarding the possibility of censorship in the past. Still, for the most part, if you encounter troubles in reaching specific websites, they are more likely to be the result of geo-restrictions, rather than censorship from the country itself.

You might have difficulty reaching websites that are only available in certain regions that don't cover Slovakia, such as US news sites, foreign gambling sites, and alike.

But, a VPN will definitely help you reach those in no time.

Once again, Slovakia is a very good country when it comes to privacy, also.

The country's government is not conducting a massive online surveillance operation. However, a VPN is still necessary because your online privacy will always be in danger from other entities.

While the government might not be tracking your every move, foreign companies, advertisers, and hackers will most certainly try.

Such information has a high value in their circles, so it is up to you to protect yourself.

Make no mistake in thinking that you won't be interesting to them – anyone's data is valuable to someone, so ensure you protect yourself when going online.

Streaming is bigger than ever these days, especially when it comes to services like Netflix.

But, if you didn't know, Netflix has different libraries for different countries. So, if you wish to watch a show or a movie and you can't find it on Netflix, the chances are that it is simply not available in Slovakia and that you need a VPN to access it.

The same goes for entire streaming services, such as the UK's BBC iPlayer, Hulu, Disney+, and others, all of which are highly sought-after, but not available in most countries.

Lastly, you should also keep your online security in mind, especially if you tend to move about a lot, and have to depend on public Wi-Fi.

Free internet is always great, but it is also quite dangerous in most cases. Since you have no way of knowing who else is connected, you might fall victim to hackers.

Fortunately, with a VPN on, you can use public Wi-Fi without such fears, as these services protect your connection and encrypt it completely.

Is using a VPN in Slovakia illegal?

Fortunately, not at all.

VPNs are restricted in only a few countries around the entire world, and Slovakia is most certainly not one of them.

As such, it allows you to use any privacy tech to protect yourself, no questions asked. Of course, VPN tech does bring some extra perks, such as accessing sites that you shouldn't or unlocking new content on sites like Netflix.

However, none of that is strictly illegal, although it might be against the terms of a specific site or service.

Keep in mind that even torrenting with a VPN isn't illegal, unless you download copyrighted materials. In that case, you are breaking the law, which could get you in trouble.

How to get a Slovakian IP address?

If you happen to be in Slovakia and you wish to browse local content safely, or you want to connect to the country from abroad, all you need to do is get a Slovakian IP address.

Doing so is simple, but it will require one of the listed VPNs that we mentioned having servers inside the country.

Once you decide which one to use, follow these steps: 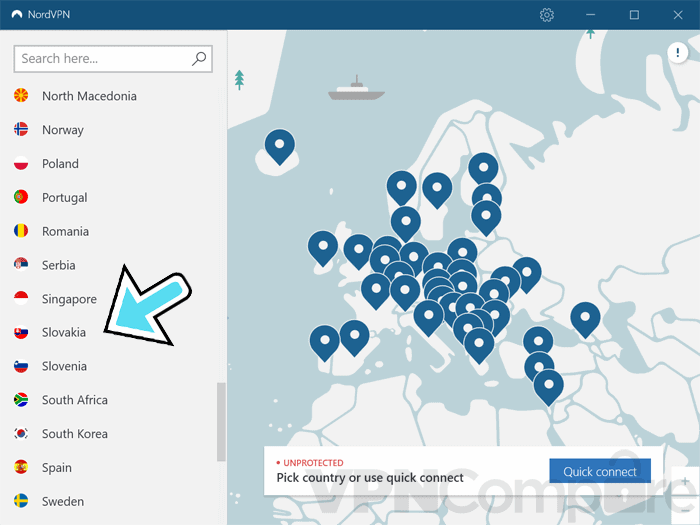 And, that's it. You will now have a Slovakian IP address and can browse the internet like a local.

Is there a free VPN for Slovakia?

When it comes to free VPNs, there certainly are some.

However, using them can go from disappointing to quite dangerous. As a result, you should probably try to avoid them if possible, otherwise, they might do more damage than harm.

What do we mean by that?

Well, it is all a result of a chain reaction that starts with the fact that you don't pay for their service. That means that they have to get the money in some other way, often obtaining it by logging and selling your data, or bombarding you with ads, or both.

Doing so will earn them a small amount of money, which will result in the app offering poor security features, and only a few servers.

With a low number of servers and plenty of people wanting a free VPN, servers do get overcrowded and slow, so you can forget about demanding tasks like streaming. And, thanks to inadequate security, you can also forget about safety.

Also, this is the best-case scenario. It would be far worse if a hacker or malicious actor operates a free VPN. In that case, you can even have your identity or money stolen.

Slovakia is a privacy-friendly country where you don't have to worry about online surveillance by the government or censorship.

However, the rest of the world is still a threat to you, so you should take steps to protect yourself, even though the government itself is not intrusive.

We've discovered NordVPN to be the best service for use in Slovakia but there are six other reputable services listed above, so the choice is yours.

I would love to know which VPN you signed up for and how you found them so let me know in the comments section below.

Get our Recommended Slovakian VPN service!