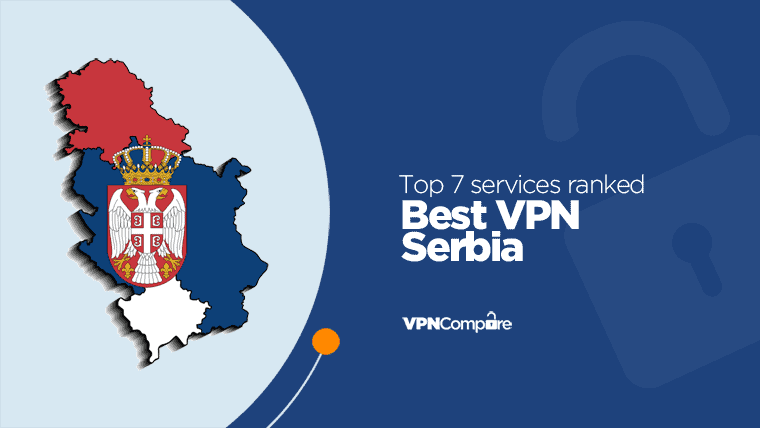 Serbia is a country that in recent years has suffered a creeping online censorship issue and a VPN is an excellent way of limiting the impact.

But with so many options, which VPN should you choose? It's what I'll be answering below.

The government has been gradually tightening its grip on the internet, with people losing their jobs over blog posts and even being questioned by the police for posting on social media.

In this article, I will be discussing the best VPN for Serbia. Whether you are a Serbian national or travelling through the country, you will want to ensure you and your data is fully secure by using a VPN.

ExpressVPN is my number 1 recommendation of VPN for Serbia, with over 3000 VPN servers for you to connect to worldwide. They also offer servers located in Belgrade with multiple IP addresses that you can assume letting you keep your data secure.

With nearby servers in Romania, Hungary, Croatia, and Greece you'll be able to hop outside the Serbian jurisdiction while retaining top speeds.

They have a strict no-log policy that has been audited by a third party meaning that even if the Serbian government requests your browsing data, ExpressVPN won't be able to hand it over as they don't keep logs.

The above will come in handy when you want to view restricted content such as banned news websites, which we will discuss later in the article.

One of ExpressVPNs strongest points is their vast selection of apps that cover most popular devices such as iOS, Android, Mac, Windows, Linux, and others.

They also offer a 30-day money-back guarantee that removes all of the risk from you, if you aren't happy with the service, you can get your money back.

Get the #1 VPN for Serbia

CyberGhost has 8 servers located in Belgrade, meaning you will be able to find a secure Serbian IP address with ease. This makes surfing the web while sitting in a Uzitak coffee shop a safer experience.

With an inbuilt feature that automatically selects the best server for you to connect to, you will never have to put up with a poor connection again.

You can connect up to 7 devices to your VPN simultaneously, securing all of your devices, and CyberGhost's HTTPS Redirect mode will connect you to the most secure version of any site you visit.

A 45 day money-back guarantee means you can fully explore the VPN before you are committed to your purchase.

With over 1500 servers worldwide, 3 of which are located in Belgrade you will be able to find both a local IP address and connections all around the world.

IPVanish offers a built-in secure 250GB cloud storage known as SugarSync that will encrypt and back up your files, so you will have peace of mind knowing your personal files are safe, secure, and most of all, private.

A 24/7 customer support and a 30-day money-back guarantee will ensure you are satisfied with their service. 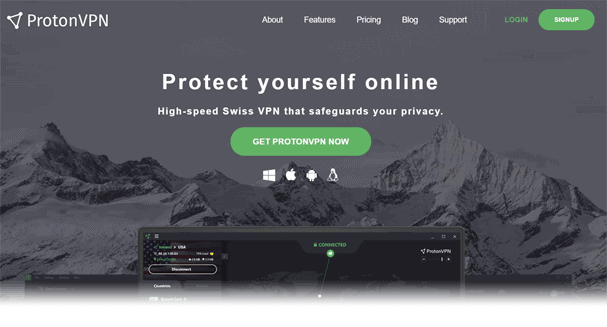 ProtonVPN is has a strict no-log policy that has been proven to be true by third-party audits.

The service is based in Switzerland outside of the 14 eyes jurisdictions which, in theory, should add an extra layer of privacy.

ProtonVPN offers what they call ‘Secure Core' that reroutes all of your traffic via multiple servers in Sweden, Switzerland, and Iceland before leaving their servers ensuring your activity is protected by those countries strong privacy laws.

With 8 servers located in Serbia, you can quickly get access to a secure Serbian IP address and browse the net with semi-anonymity.

The ability to connect 10 devices at once is a large allowance allowing you to protect your entire family.

With servers located in Belgrade, Surfshark is perfect for unlocking Serbian TV channels while you are abroad such as RTS 1 and Studio 8, both of which require a Serbian IP address to view.

You will have the ability to connect an unlimited number of devices to your VPN and with Surfshark's incredibly low prices, they won't break the bank either.

They have a built-in adblocker that will stop adverts and malware before they even load, adding some extra security to your device.

A stand out feature is their Camouflage mode which hides your VPN usage from your ISP, so nobody will know you are using a VPN.

If you want a fast, secure VPN that prides itself on its fully audited no logs policy, then VyprVPN is for you.

Discover how some weaker providers have confusing logging policies.

With 5 Serbian servers and over 700 servers located all over the world, you will have access to secure internet connections both within Serbia and internationally.

Their built-in Chameleon technology fights back against censorship and will help you unblock websites that have been blocked by the Serbian government while maintaining your privacy.

If you don't like their service, you have 30 days to ask for your money back.

PrivateInternetAccess (PIA) has a whopping 12 servers located in Serbia in the capital city of Belgrade and approximately 2000 servers in total. With over 40 countries covered your choice of connection point is wide and varied.

With your subscription to them, you will have the ability to connect up to 10 devices simultaneously to your VPN. So all of your devices can make use of their no log VPN service.

Something that really makes PrivateInternetAccess stand out from the crowd is their option to pay with gift cards allowing you to pay without revealing any payment data.

Why do I need a VPN for Serbia?

A VPN is a requirement for most countries these days, especially if you value your privacy or wish to unlock a more generous selection of entertainment content.

Below I've listed some of the main reasons why you should be considering using one in Serbia.

Freedom of speech has been on the decline in Serbia.

In 2014 after severe flooding that killed over 50 Serbian nationals, many websites that posted any articles that criticised the government and their actions during the event were hacked and mysteriously taken offline.

Dunja Mijatović, the OSCE Representative on Freedom of the Media stated “I am deeply concerned about allegations that websites and online content are being blocked. This is a clear violation of the right to free expression”. (Source: OSCE)

As if that wasn't worrying enough, many of Serbia's citizens were questioned by the police for their social media posts which were deemed as criticising the government, or satirical in nature.

A news editor lost her job when she debunked a video of the Serbian Prime Minister saving children went viral. After her article appeared online, she was swiftly removed from her editorial position. (Source: IPSNews).

VPNs were designed to keep your online data private and out of the hands of anyone who happens to be snooping around the internet looking to steal your information.

As I mentioned earlier in the article, the Serbian government has been cracking down on your freedom of speech. Not only that, but they have been restricting your access to certain news sites, controlling what you can and can't see.

By using a VPN, you will bypass any restrictions that have been imposed by your ISP, giving you access to restricted websites.

It will also prevent your ISP from tracking your usage, so they won't be able to share your activity with the government.

As well as avoiding ISP and government tracking, you will be able to prevent international companies from tracking you too, such as marketing businesses.

When it comes to unlocking new Netflix content, a VPN is all you need.

With a VPN, you will be able to connect to servers in other countries such as the US, gaining access to their huge Netflix library.

You will also be able to access regionally blocked websites such as the UK's BBC iPlayer which offers some fantastic shows.

Other services such as Disney+ aren't currently available in Serbia, but with a VPN you will be able to access the streaming site and enjoy all of the movies and TV shows it has to offer you.

To put it simply, a VPN will supercharge your device into the ultimate streaming system.

Why are they blocked?

So to stop some betting sites from operating in their region, they have blocked them.

It's not just gambling websites either as there is a range of inaccessible sites and services.

Is there a free VPN for Serbia?

There are free VPNs in Serbia, but I strongly recommend against using them.

The bottom line is they cannot be trusted.

There are numerous cases where so-called “free” VPN services have been leaking data all over the internet.

This makes their VPN redundant as the whole idea of the service is to keep your data safe and secure.

Another factor to consider is that free services are well known for installing malicious malware onto your device for the purpose of mining your information which will no doubt be used to turn a profit somewhere down the line.

This was proven to be the case with 38% of “free” VPNs that were tested.

If that wasn't enough to put you off, free VPNs have speeds that make a snail look fast.

With data leaks, the risk of malware being installed, and poor connections, free VPNs just aren't worth the risk, in my opinion.

Is using a VPN in Serbia legal?

Fortunately, VPNs are legal in Serbia.

In general, VPNs are legal in most countries, they are classed as privacy apps designed to do keep the user (you) safe from anyone looking to spy on your activity and steal your information.

By connecting to the internet using your VPN, you will be able to surf the internet more safely knowing that your activity is encrypted and kept safely out of the hands of hackers, marketing companies, and even the government's watchful eyes.

How to get a Serbian IP Address

Getting a Serbian IP Address is relatively quick and easy. Let me show you how. 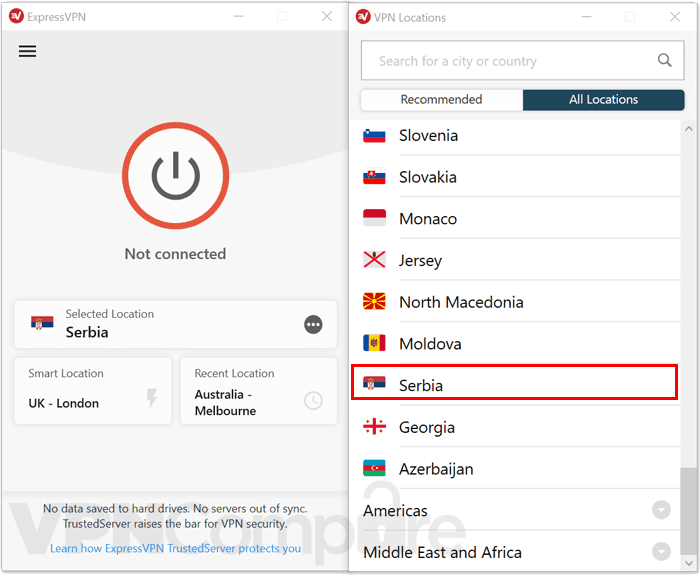 Discover the benefits of randomising your IP Address.

With the Serbian government cracking down on freedom of speech by taking down websites, restricting citizens just like you from accessing the internet freely, and having the authorities look at what you post on your social media, you really should look at using a VPN.

My number 1 recommendation of VPN for Serbia is ExpressVPN.

With servers located in Belgrade, and in nearby countries such as Romania, Hungary, and Greece, you'll find a fast, safe, and secure connection with ease.

Make sure you protect your data from government intervention and remain off of their radar by using a VPN.

Get yours now and remain safe in the knowledge that you are protected from any snooping.

Which VPN did you choose for use in Serbia? I would love you hear your experiences so drop me a comment below.

Get our Recommended Serbian VPN service!