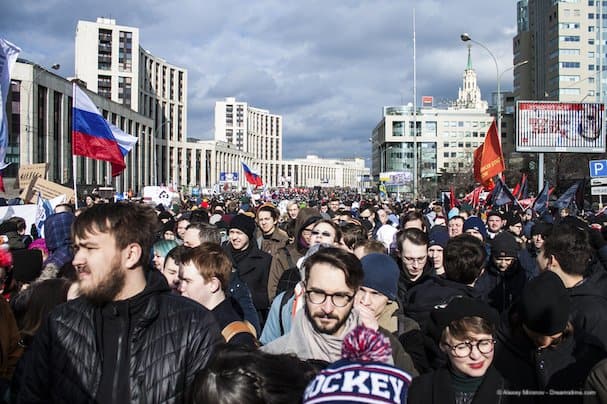 Public protests in Russia are extremely rare, primarily because the consequences of objecting to the regime of Vladimir Putin are usually pretty dire.

So, when thousands of people take to the streets of Moscow, and two other major Russian cities, as happened on Sunday, you know something pretty bad must be going on.

They were protesting against Russia’s bizarre new cyber-security bill which plans to isolate the Russian internet from the rest of the world. The justification for this move is, you guessed it, national security.

In the name of national security, Russia is planning to make some sweeping and draconian changes to their internet.

The end result is likely to be a system much like that suffered by people in Communist China, with an internet which is effectively cut off from the rest of the world by a combination of extreme censorship and online surveillance.

In February, the new bill passed the first of three readings in the Duma, the lower of Russia’s legislative assemblies. The most troubling of its many clauses is one which requires all internet traffic to be routed through access points controlled by the Russian state.

This would in effect give the Russian state access to all data from Russian internet users as well as handing them the power to block any content or websites they like.

The bill also includes proposals to build a national domain name system. Put together these two things would even give the Government the power to cut Russia off from the wider internet completely, but still retain a working domestic internet service.

The Putin regime says this is necessary for cyber-security reasons. Opposition leaders and most commentators agree that it is a flagrant attempt to control online content and stifle dissent.

Given that Russia’s Parliamentary system is weighted heavily in favour of the Putin regime, it seems highly unlikely that the bill will undergo any substantive changes before it is passed into law. When the Kremlin proposes legislation, it almost always gets what it wants.

This means the people had no choice but to take to the streets to voice their anger. They did so in large numbers too, especially when you consider the risks of opposing the Putin regime in Russia.

According to White Counter, an NGO that counts participants at rallies, there were around 15,300 people at the main protest in Moscow. Local police claimed there were just 6,000 people there.

That protest was authorised by the authorities as were those held in the southern city of Voronezh and the far eastern city of Khabarovsk. A number of people also took part in an unofficial protest in St Petersburg.

Opposition people say that around 15 protestors were arrested in Prospekt Sakharova in Moscow as protestors brandished banners and chanted slogans such as “hands off the internet” and “no to isolation, stop breaking the Russian internet”. One AFP reporter said he saw at least one protestor being dragged away by his arms and legs.

Some protestors were even brave enough to speak to reporters about the issue. “If we do nothing it will get worse,” one anonymous protester said to Reuters news agency. “The authorities will keep following their own way and the point of no return will be passed.”

Another, who identified himself as Sergei Boiko, told the AFP agency that “the government is battling freedom… I can tell you this as somebody who spent a month in jail for a tweet.”

What can the Russian people do?

For the time being, Russian people can still get around the country’s existing online censorship by using a VPN. Despite VPNs being officially banned in Russia, they are still widely available.

By using a VPN such as ExpressVPN or IPVanish, you can still connect to a server outside Russia and so access various online sites and services that are not available in Russia. These VPNs can also help you to post content and comment online without fear of state reprisals.

However, if the Russian state is able to implement the new system outlined in this draft bill, that could all change. Forcing content to pass through state-controlled data points could make using a VPN in Russia much harder.

There is much debate as to whether Russia has either the resources or the technical know-how to build such a system. But if they do, the onus will then fall on VPN providers to find a way around it.

They have a good track record in this regard, so it is by no means beyond them. But for Russian internet users, it remains a deeply troubling time.