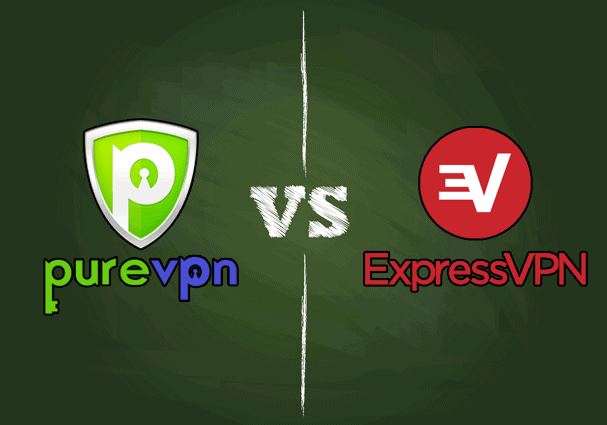 Two of the biggest and well known names in the VPN industry, but who to choose?

Both PureVPN and ExpressVPN are names you can’t avoid and if you’ve been looking for a VPN service then these two have probably crept up many times.

Choosing between the two is incredibly difficult though. With both positive and negative user reviews and a similar level of service, how can you pick one over the other?

To help you make a decision we’ve taken the most important categories to consider when choosing a VPN provider and taken a look at each of them in a head-to-head comparison between PureVPN and ExpressVPN.

PureVPN is without a doubt one of the biggest names in the VPN industry but with a mixed bag of reviews it’s difficult to know what is true and what is false marketing or false negatives.

They’re certainly popular with a large user base and offering one of the largest VPN networks available they make a definite contender for your consideration.

Some of the standout features of the service are:

A couple of negatives are:

ExpressVPN is another one of the biggest names in the VPN industry but the positive reviews for this service far outweigh the negatives.

Registered in the British Virgin Islands they’re an off-shore VPN provider that falls outside five-eyes, 9-eyes, 14-eyes and even 41-eyes spying nations, read here for more info on that.

If you’re concerned about government snooping then it’s definitely one of the biggest positives of the service.

A few of the other positives are:

A few negatives are:

Let’s face it, price is a consideration for most of us.

While a VPN service is never going to break the bank it’s always wise to choose carefully. A low price can often mean a bad service but paying a high price does not guarantee a good service either.

As a VPN is necessary these days it’s a service you’re likely to need well into the future so getting a good price is critical.

ExpressVPN does have a 30-day money back guarantee versus the 7-day one from PureVPN but overall PureVPN is cheaper so on price alone they reign supreme in this category.

Both services offer up to 256-bit encryption on the most popular protocol, OpenVPN.

While more protocols are available from PureVPN they won’t all be used by the majority and while it’s difficult to pick a winner in this category the higher handshaking encryption from ExpressVPN must be the winner.

ExpressVPN has more than 1500 VPN servers in 145 locations in 94 different countries.

PureVPN, on the other hand, has fewer servers totalling just over 750 but spread over a wider range of countries. 180 different locations are available in 141 countries.

While ExpressVPN has more overall servers in the locations they provide, PureVPN have more locations.

For you as the user you should consider if it’s locations you need or resources. Again it’s difficult to pick a winner in this category so it’s a draw.

PureVPN support all major devices. Software is available for Windows and Mac desktop and laptop systems.

They also have apps for Android and iOS devices so your tablet and phone is covered. A new web based proxy has also been released for Google Chrome.

ExpressVPN also supports desktop and laptop systems running Windows or Mac OS and they have apps for Android and iOS devices.

The advantage to ExpressVPN is they also offer a custom Linux client which is extremely rare and while PureVPN does have the Chrome extension the added OS choice from ExpressVPN clearly takes this category.

Both ExpressVPN and PureVPN have access to live help.

This isn’t that common across the industry so it’s a real bonus that both providers offer this option.

On top of the live help, there is also support via support ticket.

It’s very difficult to select between both providers in this area because they offer exactly the same contact methods.

For that reason alone it’s another draw.

PureVPN and ExpressVPN are too extremely similar providers and the results of this comparison prove this.

While there are subtle differences between the two when it’s broken down into key areas there are many matching features.

Overall ExpressVPN just pips PureVPN to the winning post. I’m a little disturbed by the number of negatives reviews across the web for PureVPN but based purely on their features they do offer a similar service to ExpressVPN.

ExpressVPN recently scored a high score in our own testing scoring 4.1 out of 5 which reaffirms the quality of their service.

If you’re trying to decide between PureVPN and ExpressVPN without a doubt you should choose ExpressVPN.