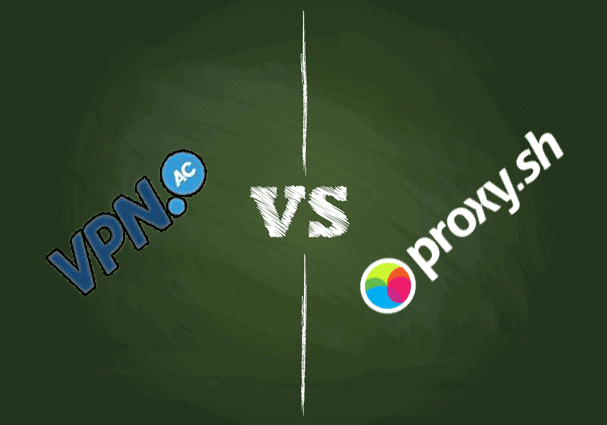 If you’re even just slightly interested in your online privacy then you’re likely to have heard of both VPN.ac and Proxy.sh.

They’re two of the most discussed companies when it comes to people who are serious about their online privacy.

As far back as 2014 security conscious users have been discussing the benefits and pitfalls of both services on sites such as Reddit.

We thought it was time to put the question to bed once and for all, who is better? VPN.ac or Proxy.sh? Read on to find out.

Proxy.sh burst onto the scene back in 2013 and has been silently improving ever since.

This shadowy company based in the Seychelles keeps their cards somewhat close to their chest with very little known about who is behind the service.

For some this is a good thing, for others it may be slightly questionable.

In the 4 years that Proxy.sh have been in operation there has been no news of any wrongdoings.

In fact, via their Warrant Canary they have even warned users that something might not be right with one of their servers suggesting it was compromised by a law enforcement agency.

Some of the best features of the service are:

A few negatives though:

Based in Romania in the European Union VPN.ac is headed by a parent company who aren’t just known for their VPN service but also for their pen testing, security device and other ventures.

The company behind VPN.ac certainly aren’t a one trick pony out to make a quick buck, they’re serious security professionals with a vested interest in all facets of computer security.

Some of the stand out features of the service are:

Price is always going to be a consideration for most people regardless of anything else.

Proxy.sh has a few different packages available that are cheaper but have fewer features. For the purpose of this comparison we’re concentrating on the two most comparative packages.

When you start to take a longer package VPN.ac really lower their prices. VPN.ac costs just $6 per month when taking a 6-month package, the same which at Proxy.sh costs $8.50.

When it comes to price alone, VPN.ac far outperforms Proxy.sh.

Both VPN.ac and Proxy.sh are leaders when it comes to the encryption available on their servers.

Both offer access to PPTP, L2TP and OpenVPN protocols.

Both have 4096-bit RSA keys for handshaking when using OpenVPN.

Both also offer extra encryption modes such as XOR and ECC which aren’t available from many other providers.

Both services offer encrypted DNS servers and multi-hop technology that sends your data through more than one VPN server.

For this reason alone it’s almost impossible to choose a winner. There are so many security and privacy features from both providers they’re definitely ahead of the game.

When considering the main security and privacy features it is impossible to choose between the two, so in this area, it’s a draw.

Server locations should be a consideration for you and depending on where you live in the world will depend on how critical this is.

VPN.ac are a lot smaller than Proxy.sh in terms of server locations with just 21 countries covered.

Proxy.sh on the other hand have servers in 57 countries.

Although Proxy.sh costs more they do offer more than double the amount of server locations and are a clear winner in this category.

The great news is both Proxy.sh and VPN.ac are compatible with all major devices.

Both offer software for Windows and Mac computers which means you can protect both your desktop and laptop.

They also have apps for Android and iOS devices so if you have a phone, tablet or other portable device running a Google or Apple operating system then you’ll be covered.

There really isn’t a lot to separate both providers so it’s clearly a draw.

Both providers are similar on their support methods.

Essentially support is only offered through their contact form which opens a support ticket.

VPN.ac do have a couple more methods including a direct email address, Wire, XMPP/Jabber and even Skype. You could also write them a letter as they list their real physical office address.

Proxy.sh are a little less easy to get in touch with.

It’s hard to make a choice on customer support because the offering is basically the same, however for the purpose of selecting a winner VPN.ac just edges this category being slightly more open and having a few more contact methods.

Selecting between Proxy.sh and VPN.ac was one of the hardest decisions we’ve ever had to make.

Essentially both services are extremely similar and in areas they differ, but overall both have positives and negatives.

Ultimately there needs to be a winner and for the purpose of helping you choose we’ve selected VPN.ac as the better provider.

So if you’re undecided then we recommend signing up to VPN.ac although if you like the larger server selection from Proxy.sh then they don’t make a bad choice either.