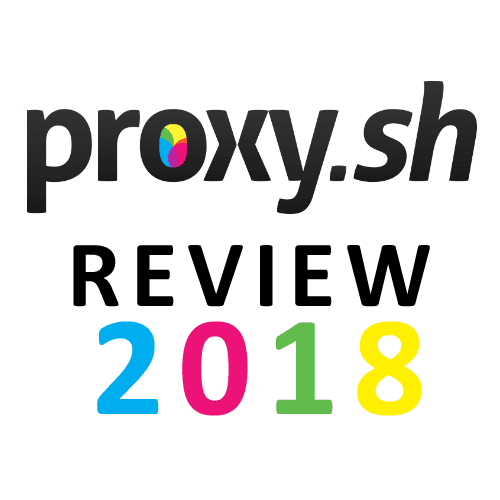 Proxy.sh burst onto the scene in 2013 and after a rocky start with some negative publicity they’ve gone on to be one of the most secure VPN providers available.

Based out of the Seychelles run by a mystery team the Proxy.sh service has always been fast and reliable. However, with little fanfare from them in recent years, are they still up to the job of providing a secure VPN service? In this Proxy.sh Review for 2018 we’re finding out.

The subscription prices for Proxy.sh haven’t changed for the longest time and they do things a little differently to many other providers.

Unlike other services that offer one package that changes only in the length of subscription, Proxy.sh offers a range of packages that vary in the server count you get access to.

The following packages are available:

The package selection offer is a little confusing especially if you’re a new user. For most users the Solid package will be most suitable, although if you only need access to a handful of servers then the Basic package could well do.

Prices are a little higher than average but some savings can be made if you choose to subscribe for a year.

Proxy.sh offers access to PPTP, L2TP and OpenVPN although via most of their apps they offer access to OpenVPN only. If you want to access the other protocols then you’ll need to set them up manually.

Proxy.sh have been at the forefront of logging honesty for a number of years and are one provider who is trying to be crystal clear about their logging policy.

Metadata is information about when you connect, what server you connected to, the times you connect and disconnect, that sort of thing. Proxy.sh claim to store none of this.

Although Proxy.sh state they store no such details it’s worth noting that they may from time to time monitor servers briefly for operational reasons. This would allow them to see a live view of users connected, although not necessarily who those users are or what they’re doing.

Proxy.sh claim they’ll warn users in advanced but you would need to regularly keep your eye on their server status page if you wanted to avoid such invasions.

Depending on the package you sign up for depends how many server locations you get access to. As a general rule of thumb, there are VPN servers in 57 different countries.

If you take the lowest priced package then you’ll only get access to servers in the United States and the Netherlands. Take the package above and you’ll get access to both those locations plus Germany, France and the United Kingdom.

As well as a host of regular countries available some notable VPN servers are located in Iceland, Switzerland, Hong Kong, Macau, Belize, Panama and the Isle of Man.

Interestingly alongside servers in Hong Kong and Macau, Proxy.sh claims to have a VPN server on mainland China. Although at the time of writing we were unable to connect and it was showing a 0% load leading us to believe no one else was able to connect either.

Being able to connect concurrently on 3 devices is probably more than enough for most users. However, it is a little on the low side in comparison to other providers. IPVanish allows 5 concurrent connections and VPN.ac allow 6 which is becoming the norm.

As this has been the limit for a number of years it’s something we would like Proxy.sh to consider increasing at the earliest possible opportunity.

Proxy.sh accept one of the largest forms of payment methods of any VPN provider. Late last year they expanded this large payment type offering and now accept over 47 different crypto-currencies. If you’re eager to pay as anonymously as possible then this is a very welcome addition indeed.

Further aiding your anonymity, Proxy.sh allow you to convert your login details to token based ones. This removes any trace of your account with Proxy.sh so when you log into their service even they don’t know which user you are. The negative is they won’t be able to assist you or troubleshoot issues but if you want zero details stored about your account then this option is for you.

The service publishes both a Transparency Report and Warrant Canary. The latter will alert you to any interference on their network that they are prohibited from telling you about while the Transparency Report details any requests they received such as copyright notices or from law enforcement agencies.

Unfortunately we found more than one server location either unavailable or not working. Their Singapore Boost server connected but no internet appeared to be accessible.

We also couldn’t connect to Belize, China, Macau and some Hong Kong servers. These were all showing 0% usage so we suspect no other user could connect either.

We tested these servers from two completely different countries on two different systems and the issue was the same.

Upon contacting support regarding this the initial response was quick. However, we were told it would need to be escalated to their network admin and after 2 days of waiting we still hadn’t had a response by the time of the publication of this review.

Proxy.sh offer apps for both Android and iOS devices via their app called SafeJumper.

The layout is slightly different to that of other providers who often attempt to make their mobile apps as similar visually to their desktop clients.

While there is nothing inherently wrong with the visuals of the Proxy.sh app it has to be said that visually it’s definitely not as appealing as their desktop clients.

After signing in you can select from their list of servers, this can either be condensed into hubs of countries or a list of individual servers which is a great touch. There’s a large range of both TCP and UDP ports to select from too. 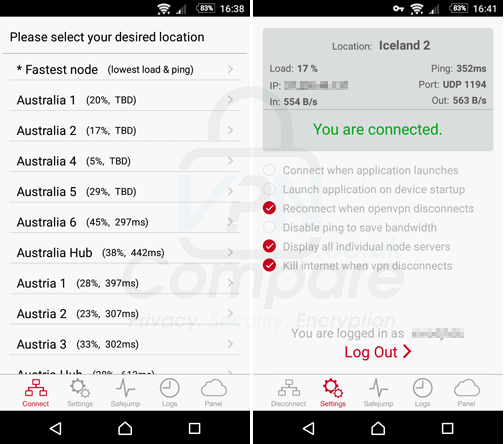 The settings area allows some customisation of the app such as when it launches and what it does upon launch. One of the best features is the kill switch which will kill your internet connection should the app drop connection. This is a great feature as you move from Wi-Fi to mobile data or pass into an area with a poor internet signal.

There is not too much more to the app apart from getting you connected. You can check out the logs of both the application and OpenVPN and access the Proxy.sh website Control Panel directly from within the app.

While it certainly isn’t the best looking app it is highly functional and connection is simple and quick.

The desktop apps for both Windows and Mac OS are much better visually than the mobile equivalent and as such are much friendlier to use.

The main screen shows connection information about your current IP Address, the VPN server IP address and details on the VPN protocol and encryption in use. You can connect with one click or jump servers easily if you’re already connected.

Server selection is done in an additional window and takes the form of a list view. Like the mobile app this can be condensed into country hubs or the full list of individual servers displayed. 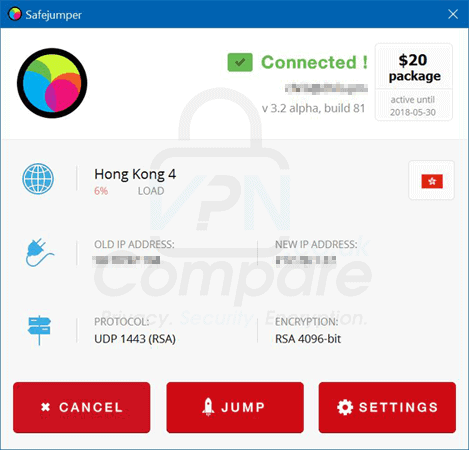 There are the additional options for connecting on start-up and others dealing with automatic connection for certain circumstances.

There is also a whole range of encryption options which aren’t available at most providers so if you like to customise your encryption then Proxy.sh is for you.

Overall the desktop apps are simple enough to use, don’t take up too much space, have most of the features you’ll require to protect your privacy and work well. No problems here.

We’ve been reviewing and testing Proxy.sh since 2013 and generally they’ve been one of the faster providers in the industry.

When using their service for everyday tasks such as internet browsing, streaming video and sending emails we noticed no notable slowdowns or interference. In fact we didn’t notice any difference between our standard connection and being connected to a Proxy.sh VPN server in a nearby country.

Unfortunately though through our actual speed tests the results tell a different story and we were a little underwhelmed with the speeds achieved.

To test the service we did a none scientific download of a 1 Gb test file from a European server while being based in the UK. Our internet connection is 250 Mbps. Without being connected to a VPN server we achieved a speed of 219.72 Mbps.

Below are our results when connected to a variety of nearby Proxy.sh VPN servers.

The France and Netherlands speeds were actually rather good but the rest were plainly average. We would have expected better from the local UK servers.

We even tried the UK Boost server network which should produce better results especially since you’re paying a premium for it but we were unable to achieve more than 50.32 Mbps.

Although the speeds aren’t too bad we have come to expect more from Proxy.sh and would have expected them to fair better. That said nearly all servers would be suitable for doing high speed intensive tasks such as streaming high quality 4k video.

You certainly won’t have any trouble streaming movies or downloading files relatively fast. However if you have an extremely fast internet connection then you may be a little disappointed not to be getting eye-watering speeds.

Encryption is one area that Proxy.sh really shine on. They have one of the largest range of encryption options in the VPN industry.

Additional options of Tor, ECC and Xor are available and if you’re an advanced user then you’ll appreciate having the ability to enable some of these options.

The full list of encryption goes outside the scope of this review but there are multiple documents in the Proxy.sh FAQ sections detailing their encryption options in full.

Proxy.sh is one of the best in the industry when it comes to policies.

Their privacy policy lists the types of details they store about you as a customer which is very little indeed. They also claim not to store any details about your connection or usage data.

Further to this they claim that any data that is retained is stored in RAM and so will be lost upon shutdown or reboot of their servers.

There really are very few providers who can match Proxy.sh in terms of openness and a willingness to keep their user base informed.

Proxy.sh have for the longest time been one of our favourite providers and this year that hasn’t really changed.

We love their openness and the ability to select a range of encryption options. Their policies are second to none and the fact they store no logs is also a bonus.

Although the speeds on the Proxy.sh were a little lower than we would expect they are still fast enough for most uses. If you’re a heavy downloader though with a top speed internet connection you may wish to consider a faster provider.

We had a few issues connecting to some of the Proxy.sh servers on two completely different systems in two different locations and unfortunately the support was pretty slow in responding to these issues.

Software and apps are available for all popular devices and they’re simple enough to use for beginners with enough options to keep advanced users happy.

We also really liked the fact that most security features of their apps have been thought of such as DNS and IPv6 Leak Protection and the inclusion of a Kill Switch.

Proxy.sh is definitely a service we would recommend. They have a few rough edges that we haven’t noticed in the past and we would hope they get them ironed out this year.

If you’re considering signing up then you could do far worse and Proxy.sh claim to offer an unlimited refund period so if you’re unhappy with the service you can simply get your money back.