Overplay vs StrongVPN: A 2017 Comparison 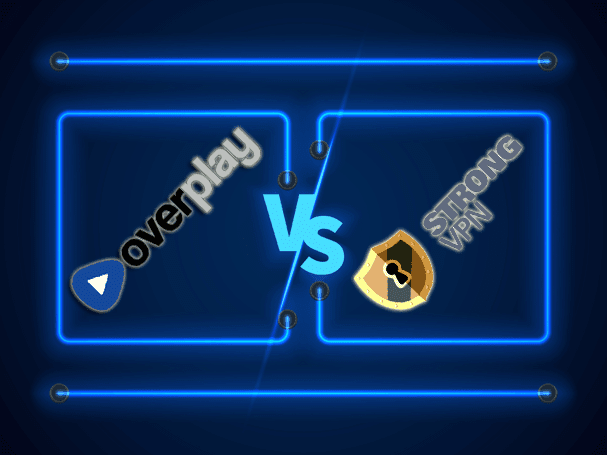 Overplay and StrongVPN are two of the biggest names in the industry and if you’re searching for a VPN service then you’re likely to have come across both.

Choosing between two seemingly similar VPN services can be difficult though. They often cost roughly the same and appear at first glance to offer the same features but after spending years researching VPN services I can tell you now that services vary widely.

Without having the ability to test services in advance it’s impossible to know which is the better service so in this guide I’ll be letting you know about the positives and negatives of each service and finishing off by telling you who offers the best service.

You’ll come away with a clearer understanding of what is available from each service and the ability to make a choice between the two.

Overplay are well known for their SmartDNS service that lets users access geo-restricted content without any speed loss but they also offer a very robust VPN service too.

Recent releases of apps for both Android and iOS have opened the service up dramatically and after updating their desktop clients for Windows and Mac they’ve become a fully fledged VPN service.

A few of the highlights of the OverPlay service are:

There aren’t too many negatives but some dislikes are:

StrongVPN is one of the oldest VPN providers in the industry and have been around in one form or another since 1995.

With such a rich history they’re trusted by hundreds of thousands of users and the longevity of the service is testament to their quality.

A few of their highlights are:

A few of the negatives are:

Paying on a monthly basis sees very little difference between the two providers. StrongVPN will set you back $10 per month with Overplay coming in 5 cents cheaper at $9.95 per month, so no real savings here.

There’s an additional 3-Month package from StrongVPN which costs $8 per month.

On price alone, StrongVPN is the clear winner.

When looking at protocols alone, StrongVPN is clearly the stronger option.

StrongVPN, on the other hand, has a larger array of VPN protocols available including PPTP, L2TP, SSTP, IPSec and OpenVPN.

If you have a specific needs for SSTP then StrongVPN is your only option, however with OpenVPN being the most popular and safest mode you can really choose between the two.

Both StrongVPN and Overplay use 2048 bit RSA keys for OpenVPN authentication so there is little difference here.

Overplay and StrongVPN both offer 256-bit encryption when using OpenVPN but there is an option to use no encryption with Overplay which is good for streaming geo-restricted content where encryption isn’t necessary.

Security and Privacy are pretty much the same on both services, but with StrongVPN offering more protocols it just pips Overplay to the prize.

Overplay offers access in over 50 countries around the world in 70 different locations and with more than 650 servers.

StrongVPN, on the other hand, has servers in just 24 countries and 46 different locations. They do however have more than 475 servers.

Both Overplay and StrongVPN offer software for Windows and Mac and apps for Android and iOS.

Overplay have recently released mobile apps which has massively improved the service. StrongVPN have had apps for a while.

As well as recently releasing mobile apps Overplay has also overhauled their desktop software to make it easier to use and more pleasing to the eye.

StrongVPN, on the other hand, has quite clunky software which is outdated in design and in my personal experience not the most pleasant to use.

Although both services offer the same software and apps the ones from Overplay are much nicer and easier to use making them a clear winner.

Both services have extensive guides but the only way to get support is via support ticket.

Both Overplay and StrongVPN reply quite quickly so there is very little in the way of difference when it comes to getting support from either.

With no difference between the two, it is clearly a draw.

So there you have it. When taking individual features of the service it appears there is very little in it.

When comparing the most important features though Overplay is the clear winner.

Outside of the comparison Overplay also offers far faster speeds and while StrongVPN is considerably cheaper when taking an annual package they also have far fewer server locations available.

Without a doubt if you’re trying to decide between the two you should sign up to Overplay.