Overplay take SmartDNS to the next level with JetSwitch 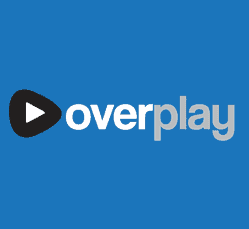 SmartDNS is a system to access region restricted content without the need for a VPN service. Although SmartDNS does not have the security and privacy features of a VPN it is a solution for watching content and accessing sites that are region restricted in your location. Overplay are one of the leading providers of SmartDNS services and have recently taken the technology to the next level.

Overplay today announced their sparkling new feature named JetStream. While the name itself doesn’t give too much detail away the actual benefit of the system becomes instantly clear. Up until now most SmartDNS providers including Overplay automatically selected the region for the content you wished to view. This would mean that generally if you’re outside the US and have a Netflix account the SmartDNS system would automatically enable you to use the US Netflix site.

For many accessing the US version of Netflix is what they want to achieve but the previous system limited users to a specific regional site that the SmartDNS service dictated. Overplay was always slightly more advanced than some other SmartDNS providers in that they let you select your overall region. However this was still somewhat restricting.

With the introduction of JetStream Overplay are pushing the boundaries of SmartDNS technology and starting to expand the amount of control the end user has. No longer are users locked in to one specific region for all websites they access. It is now possible for each user to customise the region for each specific site and streaming service.

How this affects users is simple, you are now able to specify which website region you want to access and make a mix of regions over different sites. For example you can set Netflix to access the United States site while having Amazon Instant set to access the United Kingdom site even though you may be located in Australia. The changes don’t stop there and Overplay provide a list currently of around 64 sites that can be individually tailored to your needs.

While some sites are only available in specific countries the JetStream system does allow the user to turn off and on the SmartDNS function for that individual site. If you reside in the United States and wanted to disable SmartDNS for Hulu but wanted to access the UK version of Netflix then this is now possible. While some SmartDNS systems do allow the user to specify which region variation of a site you wish to watch, very few including Overplay in the past allowed such customisation on a large scale. 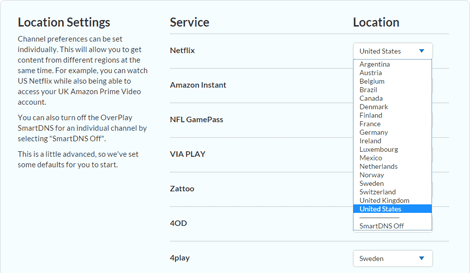 It is now possible to watch BBC iPlayer while looking through the US Netflix catalogue while also watching the Swedish version of Via Play, you are only limited by the amount of eyes you have or the devices you can physically watch or browse at the same time. For those who only have the standard set of two eyes the settings are stored which means you can alter them at any time and then leave them alone allowing a fully customised entertainment package worldwide regardless of where you’re physically located.

The future of SmartDNS

JetStream is a collection of new features, the obvious main benefit is the Location Settings detailed above. The whole system has been overhauled to be more user friendly and aid those less technical to understand if issues arise. Further new features include the Global Settings option which allows users to turn the whole SmartDNS system off and on even when using the Overplay DNS servers. This allows users to be constantly “connected” via Overplay but have the ability to turn the system off without the need to remove settings on their local desktop or device.

Overplay appear to be leading the way in SmartDNS technology and their latest advancements are an exciting development that I’m sure are only the tip of the iceberg in terms of future features.

Although SmartDNS systems do not include the security features of VPN services they are definitely handy for those who wish to stream content and Overplay with their advancements are well worth checking out.

Overplay offer SmartDNS or SmartDNS + VPN, users wishing to take a look at either service can read more or sign up at the Overplay website.