Home » Guides » Articles » ORGCon14 – Nothing to hide, Nothing to fear

One of the most interesting presentations given at ORGCon14 was the noon event on the topic of Nothing to Hide, Nothing to Fear. A well used phrase, especially in the UK where concern around issues such as the Snowden revelations have made a smaller impact than in countries such as the US.

Chaired by Milena Popova a blogger, campaigner and ORG Board Member. With other guests including Merrick Badger from the campaign Opposing Police Surveillance, Elenaor Saitta, a nomadic hacker, artist and designer, Erin Saltman from the Quilliam Foundation, the world’s first counter-extremism think tank set up to address the unique challenges of citizenship, identity, and belonging in a globalised world and Güneş Tavmen a Turkish Internet rights expert.

The talk basis questioned if the line “Nothing to hide, Nothing to fear” justifies mass surveillance and with this, are Governments considering all citizens are potential criminals that require monitoring? With the age old understanding of innocent until guilty, is mass surveillance eroding this theory and risking a legal system that we hold with high regard? 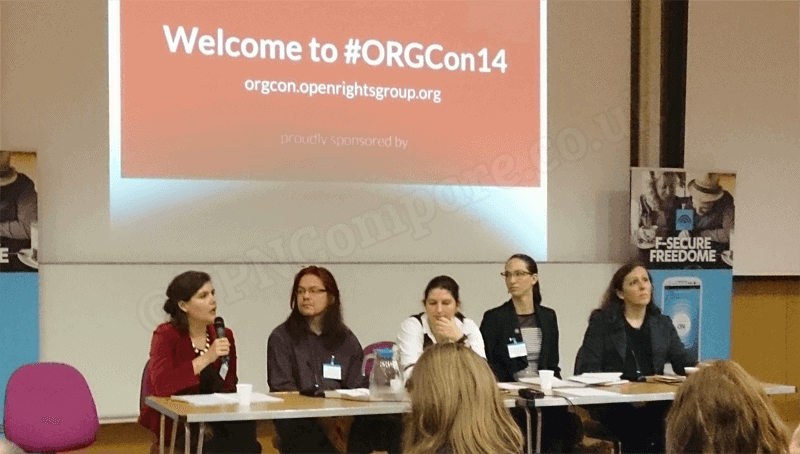 Güneş Tavmen started off answering the topic question stating that everyone has something to hide and most importantly, regardless of this, everyone has a right to privacy.

Merrick Badger explained that the majority of citizens are unable to understand the implications of mass surveillance because they have never run in to the state. Certain individuals who are targeted are the ones who will understand what being targeted feels like.

Erin Saltman explained that the issue is the mass collection of data that is not even being looked at. The issue around data is, we ourselves give away our personal data, we post photos on Facebook that has facial recognition. We say we fear monitoring but on the other hand we give away most of our data freely.

Elenaor Saitta took a slightly different stance than Erin Saltman and clarified that we do not choose to give data away, but that we are limited because we only have one choice, which is Facebook. Due to everyone using one major social networking site there is little choice and no other competition. It is almost impossible for users to use an alternative if no one else is using it. Facebook has a monopoly on user data in this instance.

Governments can shape society over a long period of time using such data and social media, questioning do we even have a say in what we think or are we being subconsciously controlled by our data and the access to it. Elenaor Saitta went on to explain that certain people are being targeted, but that we are all at risk of being targeted.

The panel was asked, how is it possible to get the message across to people who may be targeted?

Erin Saltman stated that the campaign to enlighten the public must be taken outside of the normal social sphere for it to have impact, to find a wider audience for the message and not contain it.

Elenaor Saitta followed up pointing out that surveillance is considered a white middle class issue when the reality is that broader society is at risk and any socio-economic group can be targeted for surveillance for whatever purpose.

Merrick Badger agreed stating that all those who are targeted need to be speaking with one voice. Knowledge of surveillance is a systemic problem and the cases of individuals being targeted are not isolated.

Güneş Tavmen broadened the topic by explaining there are more reasons to surveillance than are first apparent. The main being an economic reason, CCTV is exported globally from the UK bringing a massive revenue stream. Child safety software is developed and sold from Sweden with which the purpose may be money driven. The issue of being targeted by a specific country is also a concern.

See our other ORGCon14 Reports.