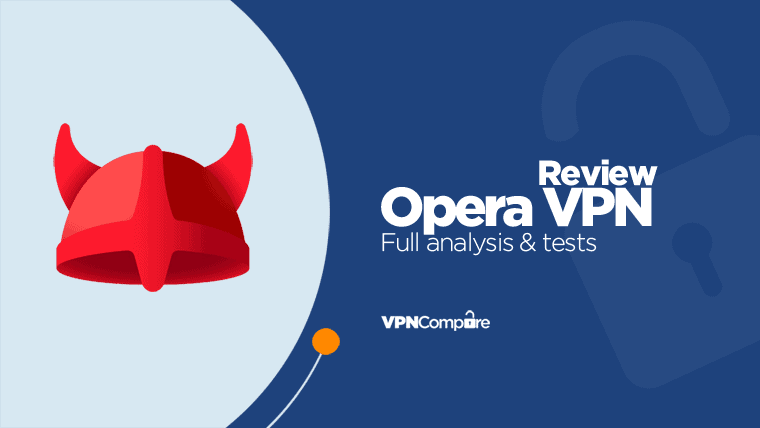 With online privacy being a significant issue these days, several top browsers are doing their best to introduce privacy features that would attract users.

With VPN being the best online privacy and security technology, you would think that browser-makers would integrate a VPN into their products, but so far, Opera is the only one that has done this.

This is what they call ‘Opera VPN', but in truth, even this is not a real VPN, based on some common aspects that we use to identify a VPN.

For example, it doesn't have an app, and instead, it comes as more of a proxy that is integrated into the Opera browser itself.

However, it does have one thing going for it, and that's the fact that it is free.

But is it any good? We're about to find out, keep scrolling down.

The first thing to look into when it comes to any VPN is whether or not it serves the purpose it is intended to.

But, what does that mean?

Well, considering that the whole point of using a VPN is to achieve online privacy, then checking out its privacy features is what we should focus on.

This is a document that explains its jurisdiction, what data it collects, if any, who owns it, and ideally much more detail about how it stores and utilises your data.

When it comes to Opera VPN, it claims that all of its users are anonymous to the company, although it admits that certain categories of data are being collected.

It also admits that some of this data may be considered ‘personal' by law.

However, it also says that, when collecting this data, Opera acts as a ‘data controller.' In essence, it keeps usage logs necessary for the firm to know how its VPN operates.

They use a catch-all privacy policy which covers both their browser and the VPN feature. Opera is owned by Opera Software AS based in Norway.

Opera VPN claims “No logs. No tracking. What you do online is your own business.”

As for what data is actually collected, that includes any data submitted by the user who creates an Opera account, such as username and email address.

However, it does note that it doesn't log any info related to your browsing activity and originating network address when you use a VPN.

Lastly, let's talk about the technical details of Opera VPN.

This would include things such as security protocols and encryption that the service uses. When it comes to encryption, Opera VPN is actually rather good, as it uses 256-bit AES encryption.

This is the strongest encryption in the industry and you'll find it offered by premium VPN services and we are pleased to see it in use.

It's also worth noting that none of your traffic outside of the Opera browser will move via the VPN service, because again this is essentially a proxy, rather than a traditional VPN.

How to use Opera VPN?

As mentioned, the VPN is integrated into the Opera browser, which means that you can only use it while you have your browser running.

It also means that it doesn't protect or encrypt any data that comes from other apps, including torrenting. Your traffic within the Opera browser itself is somewhat protected, though.

Since it comes integrated, there is no need for any specific installations or searching for add-ons. As soon as you install the Opera browser, the VPN will be there, already integrated and ready for use.

All you need to do is click on a small VPN icon located on the left side of your address bar.

If you click it, a drop-down menu will appear, allowing you to turn VPN on and off, and select a general region. 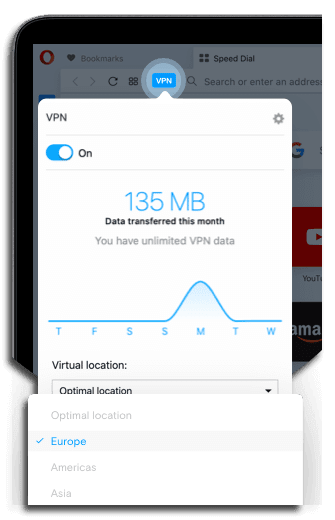 The drop-down window will show you what IP address you are displaying, as well as the amount of transferred data for this month, and the amount of usage in the past seven days, but that's really it when it comes to visible information.

If this were any other VPN, we would now be discussing apps for Android, iOS, Windows, and other systems and/or devices.

However, when it comes to Opera VPN, there are no apps for specific devices or systems. There is only the Opera browser, with a VPN built into it.

In other words, the VPN is only available on devices that can run the entire Opera browser. Although there used to be a standalone Opera VPN app, this was discontinued a few years ago.

If you're looking for a VPN that does offer apps for all major devices then it's worth taking a look at ExpressVPN, CyberGhost or NordVPN, all of which are highly-rated not only by ourselves but by other leading privacy publications across the ‘net.

In terms of server locations, Opera VPN is not the best.

It only allows you to switch between three different regions, and even these locations are labelled extremely vaguely as the Americas, Asia, and Europe.

In other words, you have no idea which country you are connecting to when choosing any of these locations, only the general location that includes the entire continent.

Opera VPN used to have real VPN servers several years ago, which were country-specific, and they included Canada, Germany, Singapore, the US, and the Netherlands.

It also had much better speeds back then than it does now.

However, that is no longer the case, and this is all the information it gives us now. However, you can't do much with it, as everyone who wanted to enforce geo-restrictions – such as Netflix – blocked Opera VPN a long time ago.

To put it quite simply, Opera VPN doesn't have customer support.

There is a Help & FAQ section on Opera's website, but dedicated customer support that you can contact via live chat and have them fix your VPN issue when you get stuck is not included.

Opera will collect reports of its VPN's performance and work on fixing issues that it may detect from such reports, but that is pretty much it.

To give them some credit, it is a free product so additional services like dedicated help can not really be expected.

From what we have seen, we can say with certainty that Opera VPN is not a good option if you are looking for genuine online privacy and security.

In fact, it only vaguely resembles a real VPN as it is right now, and it is not recommended that you rely on it too much.

There are plenty of better options out there that will not log your data, that offer more robust security features and massive networks of services in multiple locations.

They will also protect the entire connection of your device, sadly something that Opera VPN doesn't or isn't intended to do.

We're not really sure when you would find a reason to use Opera VPN.

Aside from hiding your location in a very simple manner, it doesn't protect your device's privacy on a whole, it can't unblock streaming services and it doesn't work in heavily censored countries like China (Psst, here's a list of VPNs that work in China).

Opera VPN is free, though, which is a major plus, as all good VPNs are premium services that can cost you anywhere between $10-$13 per month.

Sadly, that's not even the strongest option as there are better free VPNs out there. We don't recommend Opera VPN.

If you really don't want to pay then check out this better list of free VPNs, alternatively our VPN comparison guide compares the leading VPN services you should be considering.