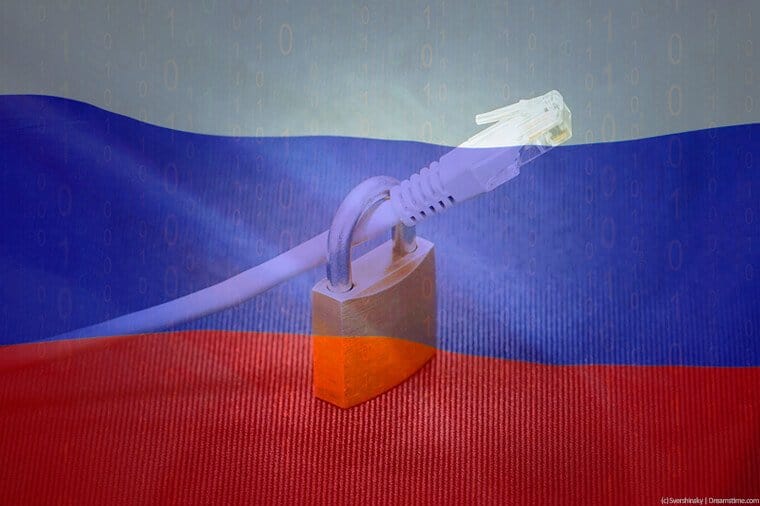 In modern warfare, the battle over information is every bit as important as the military conflict on the frontline.

And so we are seeing right now in Russia, where Vladimir Putin is scrambling to control the flow of information to the Russian people about his invasion of Ukraine.

Much talk of internet censorship in Russia is coming anecdotally on social media, which is why the latest report from OONI (the Open Observatory of Network Interference) is so timely and important.

It gives a clear evidence-based insight into the recent escalation in online censorship in Russia, which in turn indicates just what a predicament Putin has put himself in.

OONI's research uses their OONI probe technology which is operated by thousands of volunteers inside Russia and measures the extent of state internet censorship in the country.

As OONI rightly point out, censorship was widespread before the invasion of Ukraine with both countries in the habit of blocking websites from the other.

Ukraine has blocked key sites like RT.com and mail.ru, while Putin's Russia has been far more prolific, blocking numerous LGBT websites as well as any news or opposition websites that dare to criticise the Putin regime.

Since the invasion of Ukraine began, OONI's tools have confirmed a dramatic increase in online censorship in Russia.

Particularly they have confirmed that since March 4th, Facebook and Twitter are now blocked across multiple networks inside Russia. Prior to that, Twitter was being heavily throttled.

There are also a number of additional news sites that have been blocked and one site in particular, 200rf.com, which was sharing verified information about the large number of Russian troops that were being killed and captured in Ukraine.

However, OONI notes that internet censorship in Russia is implemented in a decentralised manner, unlike other authoritarian dictatorships like China. This means that individual Internet Service Providers (ISPs) are responsible for implementing censorship but inevitably, some do it differently to others.

The increase in censorship of news content online in Russia can be traced back to an announcement made by Russia's Roskomnadzor on 24th February.

It stated that all media outlets in Russia were required to “only use information and data received from official Russian sources” and threatened a fine of up to 5 million roubles for those that disobeyed.

On 4th March, a number of foreign-based news outlets including the BBC, Deutsch Welle and Radio Free Europe were blocked. OONI identified many more international sites which were also being blocked.

While this was ostensibly on the grounds of them containing information contrary to the official Russian position, many were also a tit-for-tat response to those countries blocking Russian state news outlets RT and Sputnik.

These include Krym.Realii, a Ukrainian service from Radio Liberty aimed at Crimea, Idel.Realii, a similar service aimed at the Volga region and Kavkaz.Realii another similar project targeted at the North Caucasus.

Sever.Realii and Siberia.Realii are also now blocked as is Golosameriki.com, the Russian language service from Voice of America.

One of the main reasons Putin's regime is censoring content is that it doesn't want the Russian people to know the truth about the heavy losses that Russia's invading forces in Ukraine are suffering.

On 27th February 2022, the Ministry of Internal Affairs of Ukraine launched a site called 200rf.com which it had designed to help Russian families find any family members that had been killed or captured inside Ukraine.

Russia blocked this site on the day that it was launched.

This is perhaps no surprise given that Russia has admitted to barely 500 losses while Ukraine claims that the figure is closer to 11,000. Clearly Putin's propaganda is more important to him than the families of those troops dying knowing what has happened to their loved ones.

A lot of those sites that have been blocked by the Russian authorities in the past days have posted information on how their users can get around the blocks and access free and uncontrolled information.

The simplest and most effective tool to beat the Russian censors is to use a VPN. It is no coincidence that searches for VPNs inside Russia have gone through the roof over the past few weeks.

The best VPNs to use inside Russia are ExpressVPN, NordVPN, and CyberGhost VPN. All three of these providers can unblock all of the sites detailed in this article and many more that are unavailable inside besides.

They offer the perfect combination of fast connection speeds, security, and privacy protection. To learn more, take a look at our guide to the Best VPN for Russia.

However, it would be irresponsible for us not to urge caution when using a VPN inside Russia. The Putin regime has attempted to outlaw VPNs and blocked a number of popular VPNs in the country.

This has had a limited effect so far, but it is important for Russian users to be aware of the risks of using VPNs in Russia. There have been reports of Russian police demanding to see mobile phones and searching them for messages and other apps such as VPNs.

In China, users get around this risk by carrying a dummy phone to hand over to the authorities. This trick might be worth emulating in Russia at the moment too.

The Russian people deserve to know the truth about Putin's invasion of Ukraine.

The regime is determined to stop this, as OONI have proved in their report. VPNs offer a way for Russian people to get around this, but in the current climate, this does not come without a degree of risk.