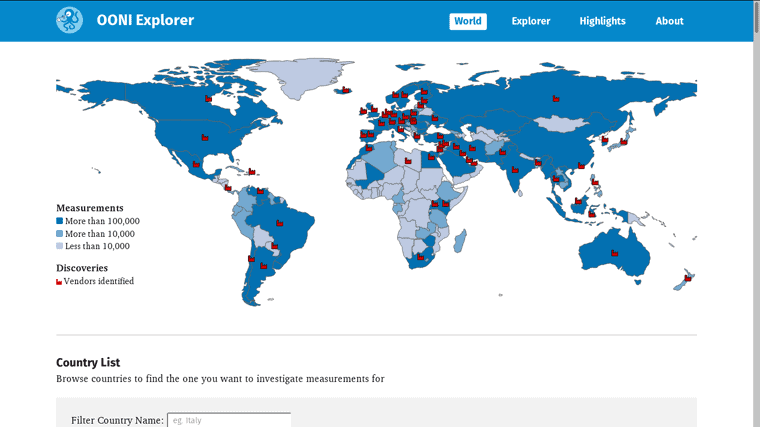 OONI might sound like a piece of playground slang or the latest tech gadget but it is actually the acronym for something hugely important; the Open Observatory of Network Interference (OONI).

It was set up back in 2012 by the team behind the Tor Project. If you are not already familiar with Tor, it stands for ‘The Onion Router' and is essentially a system which allows you to pass your internet data through a network of nodes to anonymise and secure it.

OONI came about after they created the OONI Probe, a piece of software that anyone can use to investigate their own network for signs of censorship.

By using the OONI probe, anyone can see if whether certain websites, instant messaging services, and circumvention tools such as Tor and VPNs, are blocked in particular countries or regions. It is also possible in some cases to identify systems and methods being used to censor and block content.

The OONI probe is being used every day by volunteers across the globe. This can be risky in some countries which is why the people behind OONI stress that they do not collect or record volunteers IP Addresses meaning they can assist the project anonymously.

More recently, in 2016, the project also launched the OONI Explorer, a website which makes the data from their censorship research publicly available. This piece of kit is open-source and free to use. It is also totally transparent about how it works and the data it generates.

OONI Explorer is now being relaunched as it has been improved to allow people to track online censorship trends over the eight years OONI has been in operation.

As part of the relaunch, three of the key figures behind the OONI Explorer, Arturo Filastò, the project lead, Maria Xynou, research and partnership manager for OONI, and Sarath Madayil Sreedharan, lead developer of the OONI Explorer have given a fascinating interview to the Committee to Protect Journalists (CPJ), which is well worth reading in full.

Why OONI Explorer is such a useful resource

As they explain, OONI Explorer now effectively works as an internet censorship archive. It is a constantly updating database of online censorship that can not only be used to confirm an internet block but to also trace its history too.

As Maria Xynou says, “It’s a goldmine. There are so many unreported censorship stories just sitting there in the database that journalists can discover and bring to the public.”

She is absolutely right. There are so many instances of online censorship that get little or no media coverage for various reasons, If OONI can help to bring even a fraction more of these into public awareness, it is a project well worth pursuing.

Uncovering how governments and ISPs are censoring the internet can also reveal a great deal about why they are doing it. As Arturo Filastò told the CPJ, the differences between simply blocking a site or redirecting users to a spoof site can be very revealing.

Equally, the type of page and message that is put up when a site is blocked can also tell us a lot about the motivation behind the censorship as well as whether it is legal or not.

The data revealed by OONI can be complicated, so OONI are always ready and willing to help journalists and other users unravel and understand it.

They also stress that they are always on the lookout for new volunteers to run the OONI probe for them. But they do caution that you need to be disconnected from any VPN or the Tor network to make it effective and, in some parts of the world this can be extremely risky.

Keeping censorship in the spotlight

OONI plays a crucial role in the battle against state internet censorship around the world. Its research is vital in understanding when and why governments are censoring the internet.

It is a growing problem and one that is a fundamental breach of our basic human rights. Under the Universal Declaration of Human Rights we are all entitled to freedom of expression, freedom of association, and freedom of speech.

The internet is a crucial means by which many of us exercise these rights but it is increasingly somewhere these rights are being curtailed.

OONI is playing a big role in the fightback and that is something we should all support.