OneVPN is a little rough around the edges but offers a cheap alternative.

OneVPN is a new provider on the market and with plenty of choices in the VPN space it's easy for providers to get lost in the sea of options.

Over the past few weeks I've been testing the OneVPN service to find out if they're actually any good or if you should give them a miss. So read on to find out my results.

OneVPN differs from many VPN providers out there. They offer the standard 1-Month and 6-Month packages but are lacking a yearly package.

Instead, the possibility to sign-up for a massive 4-years replaces the usual 12-month offering that is available elsewhere.

The 4-Year package costs an unbelievable $48 dollars for the whole period making it just $1 per month (approx £0.74)

I would however usually hesitate to sign-up to any provider for more than a year because it's possible a service can deteriorate over time or close completely. Although for $48 the risk isn't all that high because it's still cheaper than some 12-Month packages from other providers.

One worthy thing to note is while you can have up to 3 multiple connections on the monthly and 6-month accounts it isn't possible on the 4 years account so if you have more than one family member or want to use it on more than one device then you'll need to purchase their multi-logins add-on.

The OneVPN service allows you to select the most popular VPN protocol methods including PPTP, L2TP and OpenVPN and use both UDP and TCP on the latter.

OneVPN currently has software for both Windows and Mac and an app for Android.

There are no custom clients available for either Linux or iOS but if you do own one of those devices there are set-up instructions available on the website to guide you through the process. If you're a new user this may be a little complicated but if you're happy to follow simple instructions then it shouldn't be too much hassle to set up.

The Android app strangely isn't available from the Google Play Store so it isn't simply a case of installing it in the usual way and you'll need to visit the OneVPN website directly to install on your tablet or phone, sadly this takes away some ease of use.

The software for Windows is simple to use with all options contained within the main window. A small settings area allows you to choose ports for both the UDP and TCP OpenVPN connections. 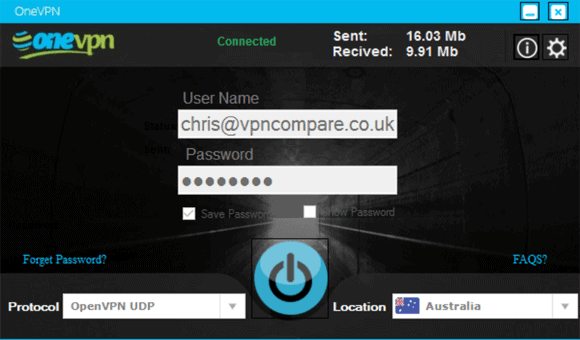 You can easily select your protocol in the bottom left corner and a country in the bottom right and then press the large blue power button to connect.

The software although usable is missing some of the polish of other providers. Features such as favourite servers or even the last server you used staying selected don't exist and whilst it's easy to use some additional thought needs to go into the interface before it is fully user friendly.

One other small gripe I did have was the location selection is a little unintuitive with countries listed in no particular order. Not a major issue but it would speed up looking for a location if you could quickly see the choices alphabetically or sorted in some other manner. There was also an issue with the font size of the text making some server locations difficult to read on my system.

The biggest concern for me is the custom Windows software makes use of a heavily outdated version of OpenVPN (OpenVPN 2.3.6) from 2014 which could include vulnerabilities that have been patched on newer updates. When you're trusting your privacy to a company it isn't good to see such an issue.

Overall the software is easy enough to use and does the job but there is room for improvement.

OneVPN has 18 different countries on offer making them a small to medium provider in terms of locations.

If you've signed up for the 4 year package then this number of countries makes the service an excellent deal. If you're on the monthly package then whilst it's still a good price there are other providers who offer 50-60 countries for only a few dollars more so you may want to consider this dependant on your needs.

Accessing blocked content from the likes of the USA, UK and Australia is possible meaning you'll be able to watch services such as CBS, BBC iPlayer and SBS amongst others.

If privacy is your concern then there are a good range of servers especially in North America and Europe. Further afield servers are available in Hong Kong, Singapore, Australia, New Zealand and Brazil.

OneVPN like most providers has no download limits meaning you're able to transfer as much data as you wish. This is good if you like to watch large videos or download torrents. There is also no server switching limit meaning you can switch servers as many times as you want.

The service claims to have an inbuilt adblocker which is unique and isn't offered by most providers. This isn't enabled on the OpenVPN protocol. For those of you who hate adverts you'll be glad they're banished from your browsing experience.

OneVPN is based in Hong Kong which privacy advocates will be pleased with as it falls outside the jurisdiction of what are known as five eyes countries, read here for more details on those.

Shared IP Addresses are in use meaning many users can be assigned the same IP Address. This is good for anonymity because essentially it should be almost impossible to link an action to one particular user.

I used the OneVPN service for just under two weeks for my daily internet use and noticed no major issues carrying out regular tasks.

I mainly made use of their Australian server due to my location but the other local servers in New Zealand and Singapore also offered good speeds.

Further afield servers in the United Kingdom worked well for BBC iPlayer and other services so if accessing blocked content is one of the purposes you want to use a VPN for then OneVPN is suitable.

Overall OneVPN offers good speeds, they aren't the fastest provider so if you're a heavy downloader or stream a lot of content you may want to consider if they're suitable for your needs. If you just want to do everyday internet tasks then they'll definitely be suitable.

I ran some speed tests on a Wi-Fi connection to see how the service performed. At the time of testing the Australian server which is my local connection was down for 5 hours so I wasn't able to complete speed tests there. I tested both their New Zealand and Singapore servers and got quite favourable results.

OpenVPN makes use of AES-256-CBC encryption.

Polices are very thin on the ground at OneVPN and although pages upon pages of explanations aren't required the policy section doesn't fill me with confidence.

Just over two lines make up the total of the Privacy Policy and while the wording states that they store no logs it would be nice if there was a little more depth to the policy section.

The Terms of Service is a little more detailed and while OneVPN does make wild claims in their promotional texts such as “Fastest VPN of [sic] the Universe” it is refreshing to see in the TOS that they clearly and correctly state that the VPN service “does not guarantee complete privacy.” It would be nice to see some other providers take a leaf from OneVPN's book and state this too.

OneVPN has 24 hours, 7 days per week live support which is an excellent feature and not something that all providers offer. For a lesser known provider this is definitely a bonus and shows that if OneVPN can offer it then some of the bigger players in the VPN market should too.

If you don't want an instant answer then you can also use the direct contact form on the OneVPN website.

OneVPN is a very new company in the VPN world trying to take a place in an already overcrowded market. After launching a free product in early 2016 they started offering a paid service in July.

Being such an unproven service I would think carefully about signing up. There are already plenty of well established VPN services that offer more and at a similar price.

There is definitely not a massive amount wrong with the service but it needs some polish before I could truly recommend it. Basics such as using outdated OpenVPN and offering an “unofficial” Android app don't leave me with confidence although with a little more thought the service can easily be user ready.

There are a good range of servers available and being able to access US Netflix, BBC iPlayer and a host of other content is definitely a good feature. If you only want to access geo-blocked content then the service is definitely suitable, however if you're extra privacy conscious then you may want to look elsewhere until the imperfections are ironed out.

At just $48 for 4 years the service is a bargain although how sustainable this pricing is concerns me. It isn't a huge amount to gamble so could be worth signing up if you want an ultra cheap VPN service to access content and even if OneVPN disappeared in 2 or more years then you've still had a cheaper service than is available elsewhere.

My suggestion? If you only want to access blocked go ahead otherwise wait a few more months to see if OneVPN adds the needed polish to make it a fully fledged VPN service. Otherwise for now look elsewhere.