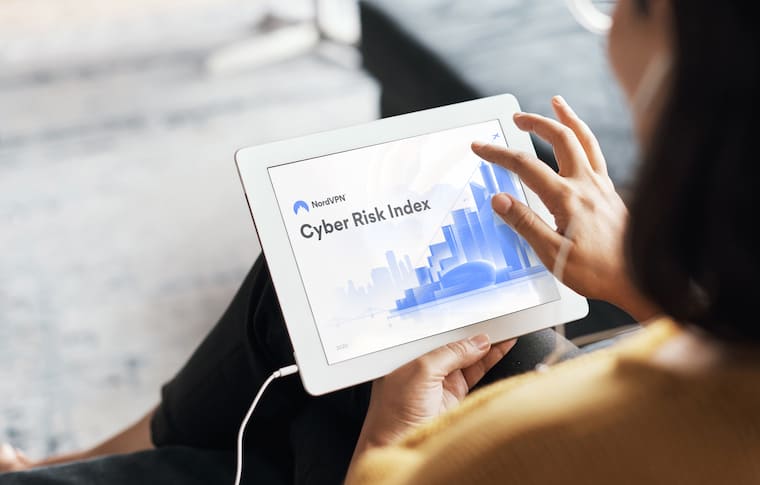 NordVPN has published a fascinating new piece of research that reveals which countries in the world are most susceptible to cybercrime.

The new NordVPN Cyber Risk Index has been compiled with the support of Statista and encompasses 50 different countries and more than 70% of the world’s population. It reveals where you are most likely to fall victim to cybercrime and the results are far from what you might expect.

How the Cyber Risk Index works

The starting point for NordVPN and Statista to develop the Cyber Risk Index was identifying the countries to focus their research on. Fifty different countries covering all five continents and more than 5.4 billion people were chosen.

These 50 countries were then assessed against 14 different factors that research deemed key indicators of vulnerability to cyber-attacks.

These included the penetration of things like social media, smartphones, and online gaming, the amount of time spent online, and the availability of public Wi-Fi.

It also looked at demographic factors like urbanisation, tourism rates, monthly average wage, and crime figures. Finally, the study also took into consideration where the countries were ranked on the Global Cyber-security index.

What was perhaps more surprising than these figures was where different countries ranked.

Which countries perform worst in the Cyber Risk Index?

According to NordVPN and Statista, the country where you are most at risk of falling victim to a cyber-attack is Iceland.

The small and well-developed Scandinavian country just pipped Sweden to top spot in the ranking. With Norway coming fourth and Denmark also featuring in the top ten, this study suggests that Scandinavia is something of a cyber-crime hotspot.

Other countries to feature in the top ten were the United Arab Emirates, the USA, Singapore, the Republic of Ireland, New Zealand, and in 10th place, the UK.

At the other end of the rankings and therefore less susceptible to cybercrime was India. They were a considerable distance ahead of Nigeria and Iraq with Indonesia, South Africa, Iran, Ukraine, and the Philippines also featuring at the bottom of the list.

The presence of Communist China in 45th place suggests that the researchers were fairly broad in their definition of cyber-crimes and clearly didn’t classify state surveillance and censorship in that bracket.

How are these results explained?

It might initially seem a bit counter-intuitive for those countries that have the most developed online infrastructures to be deemed the most vulnerable to cyber-crime, but actually when you dig down into the reasoning, as NordVPN does, it actually makes a lot of sense.

As this report highlights, the same factors that are seen to determine high levels of cybercrime also define more developed countries.

In other words, people in developed countries do more online and have more money. It therefore makes more sense to make them cyber-crime targets.

Scandinavian countries as well as other northern European countries like the UK and Ireland are regularly at the top of the rankings for internet and smartphone penetration, they have wages that are amongst the highest in the world, lots of e-commerce, and the people travel a lot.

When you consider what cyber-criminals are looking to achieve from their malicious activities, it absolutely makes sense to target people from these countries rather than those living in developing economies or under the yolk of brutal dictatorships.

Low level of digitisation and income are unfavorable conditions for cybercrime and therefore countries that fall into these brackets are less at risk.

You might wonder why Western Europe and North America isn’t up there with Northern Europe in the Cyber Risk rankings. It is a reasonable question but NordVPN is able to explain this.

North American countries are close behind Northern Europe in the rankings. But smartphone penetration in the region is at around 75% compared to 85% in Northern Europe. They also travel less and use some social media sites like Instagram less frequently.

And why is India the only country classified as being at a very low risk? As a whole, only one in three Indians are online and fewer than one in four use smartphones. Overseas travel is rare and use of popular social media sites is far below average too.

However NordVPN do point out that this isn’t the whole story.

Those Indians that online tend to be richer and travel more. They also spend longer online than even Northern Europeans and could therefore be deemed to be at a far higher risk than their country as a whole.

It is a fascinating study that reveals a great deal and you can read it in full here.