50% use their VPN daily a new NordVPN survey reveals 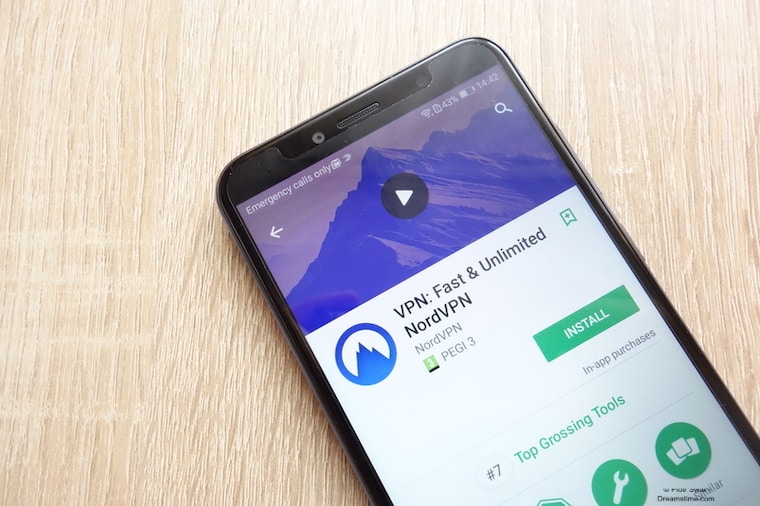 NordVPN has published the results of their latest customer survey that reveals that security is the number one reason that most people sign up for their service.

The VPN quizzed a randomly selected sample of 7,695 existing customers and the feedback they received was extremely revealing.

Security the number one priority

The key question in this survey asked NordVPN users about what circumstances they would activate their VPN in. A huge 46% of respondents responded that they always connected to their VPN when using public Wi-Fi.

This is encouraging as it suggests that warnings about the inherent insecurity of public Wi-Fi networks are getting through to people. There are still 54% of people that either don’t use public Wi-Fi or don’t use a VPN with it, so this is still a message that needs to be reemphasised.

Another 46% claimed that they connect to their VPNs when accessing content that is either private or sensitive. This is also encouraging as it implies that people are increasingly conscious of the privacy and security implications that come with accessing this sort of information online.

Our advice to most readers would be to have their VPN connected by default whenever they go online as this ensures your internet connection and all your data are protected at all times.

According to this NordVPN survey, just 33% of respondents follow this advice. This is a slightly disappointing figure and one we would hope to see increase in the months and years ahead. 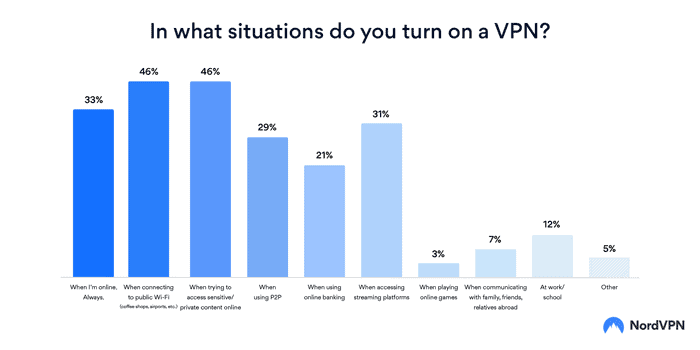 Among the other popular responses they received were ‘when using P2P’, ‘when accessing streaming platforms’, and ‘when using online banking’.

Online banking is a service where VPN use really is essential these days, but it is possible that some users rolled it into their answer about accessing sensitive content.

We were slightly surprised not to see more NordVPN users connecting to the service for accessing online streaming platforms but this is a topic not everyone is happy to talk about publicly, even in an anonymous survey.

How are VPNs being used?

Just as revealing as the responses about what people are using their VPN for were the answers to question about how often they use their VPN.

The survey found that 73% of NordVPN subscribers use the service several times a week with 50% indicating they connect on a daily basis.

Those figures are actually not bad although obviously, NordVPN noted in their comments on their survey that they would like to see them improve. We would second them on that score as the more you use your VPN the more secure you are online. But to have 50% of users connecting daily is an improvement on previous surveys of this nature. 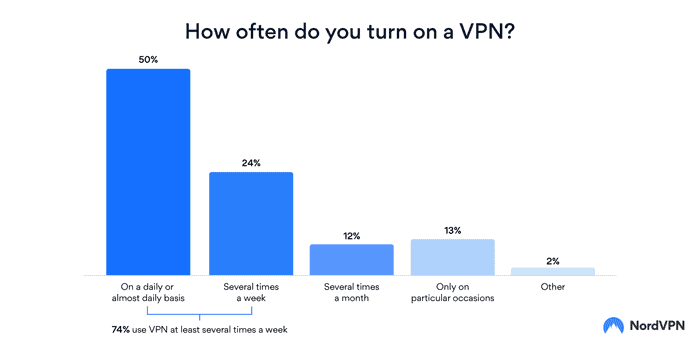 Equally interesting is how many devices people use their VPN with. Often reviews will suggest that more simultaneous connections are a bonus. As a result, a number of newcomers to the market have offered unlimited device connections with every subscription.

But the NordVPN survey found that only 52% of respondents used their NordVPN subscription on three or more devices. When asked how many use it on 5-6 gadgets, the number drops to just 9%.

When you think about it, this makes sense. Most people only have two or three gadgets of their own. Even if they share their VPN connection with their partner and kids, the chances are they won’t need more than 5-6 connections.

This data shows up unlimited connections as the gimmick it is. A few users will take full advantage but the industry standard at the moment is either five or six simultaneous connections and this data shows that to be sufficient for most people.

More worrying is which devices people use their VPNs on. It is common knowledge that we go online using our smartphones and tablets more and more these days. But NordVPN found that just 48% of respondents used their VPN on their mobile devices.

In contrast, the figure for desktop devices was a huge 85%. This is a troubling discrepancy and one that VPNs like NordVPN as well as sites like our own need to work hard to correct.

Ruby Gonzalez, NordVPN’s Head of Communications, chose this issue as the one to comment on. In her statement, she said, “The research suggests that some users tend to forget their smartphones are as vulnerable as computers and, therefore, need the same level of protection.”

She is absolutely right. The myth that smartphones and particularly iPhones are more secure than desktop devices simply does not stand up to scrutiny. They are just as vulnerable and more likely to be used when connected to public Wi-Fi networks.

NordVPN acknowledges this and it is to their credit that they have been so open and transparent about user data that should be of benefit to the entire VPN community.